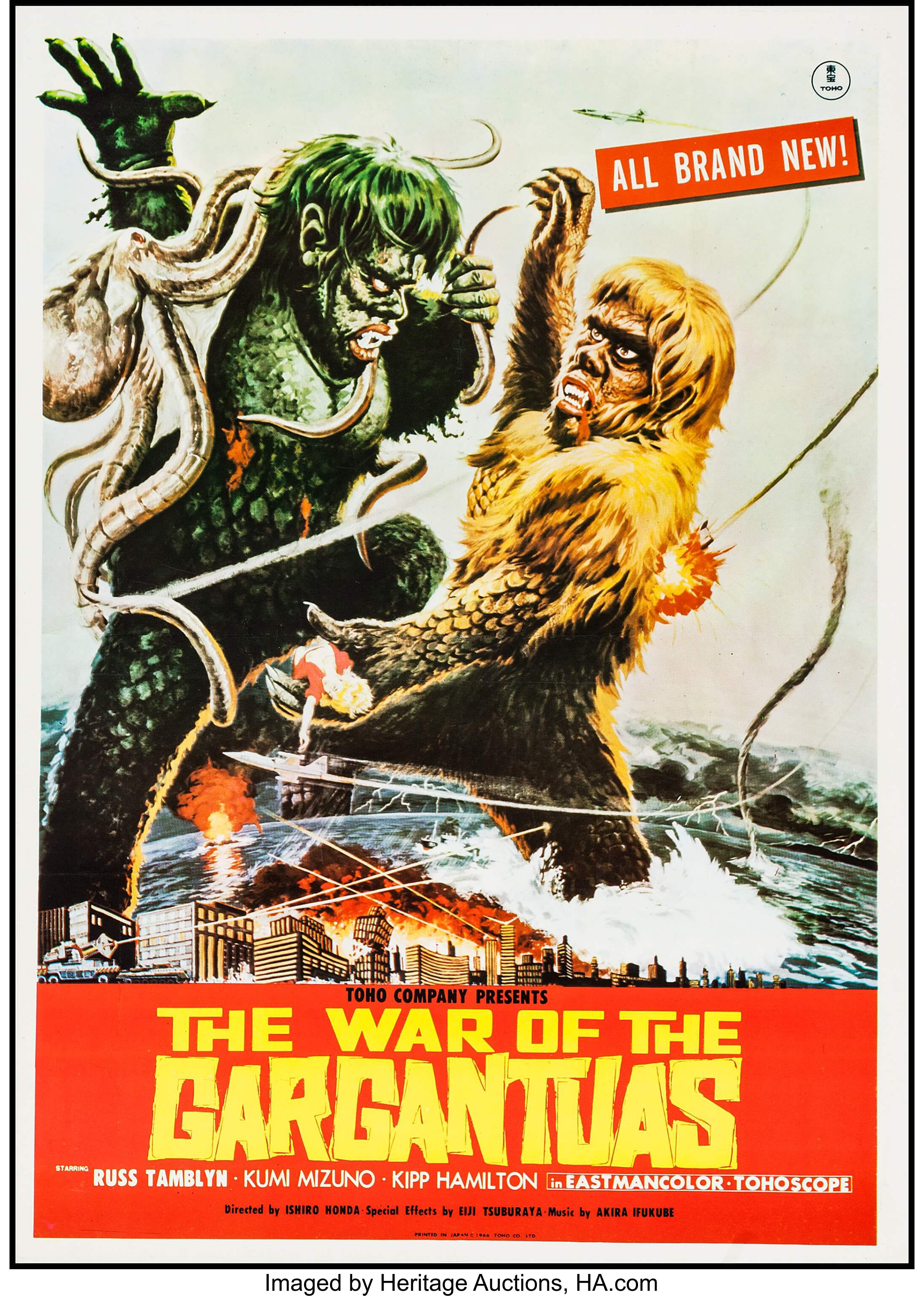 It’s time to look at a classic creature feature film. This one is about monsters that I’m not all that familiar with. They look a bit like King Kong but even more humanoid. The movie has a bit of a pacing issue near the end as it feels like they could have shaved some time off, but overall it’s a solid film. You’ve got some good action and the government is surprisingly able to defend themselves pretty well against the monsters. These guys definitely couldn’t go toe to toe with Godzilla, but you can definitely respect their power.

The movie starts off with a sailor getting attacked by a Giant Octopus. He is saved when a monster shows up and begins to do battle with it, but this becomes an “Out of the frying pan and into the fire” scenario as the monster begins attacking the ship. Somehow the sailor survives all of this and heads home to warn everyone else. The cops don’t buy this story for a second, but they become true believers once the monster shows up and starts terrorizing towns. Some believe that Frankenstein has returned, but his creators aren’t so sure. One thing that they do know is this monster must be stopped and stopped pretty soon or everyone will be in trouble. It is weak against sunlight so they will have to weaponize that.

Paul and Akemi are the main characters here. They raised the original Frankenstein who ultimately ended up becoming Sanda. It’s rather interesting that they call him Frankenstein because to me at least the monsters look nothing like that icon. I’m glad the Kaiju ultimately got different names later on. The problem here is that another monster known as Gaira has shown up and he is against the humans. He wants to destroy everyone and is definitely a rather vengeful creature. Akemi wants to protect Sanda but it’s a tough challenge right from the start since he is protecting Gaira. Sanda later realizes that Gaira isn’t on the right side, but it takes a while for that to become apparent.

Akemi is a solid heroine and means well. I’m glad that she sticks by Sanda throughout. She has a more active role than you would suspect. Paul is also pretty solid and does his best to help out, but he isn’t quite as personally invested in the situation. He seems to think of everything as a game with how laid back he is. That could just be his way of dealing with the situation though so that’s not to say that he was completely uncaring about how things were going. He was a good character.

As for the monsters, they weren’t my favorite ones. As I mentioned they look a bit like King Kong, but you could cross that with the Yeti. Together that really makes up the Kaiju pair. There aren’t any real differences between them except that Gaira is evil while Sanda is the heroic one. They are pretty evenly matched and get into a lot of battles. They aren’t extremely durable as the government is able to combat them, but this government was surprisingly high tech. They have a bunch of energy lasers at their disposal and endless rockets. If this was the government going up against Godzilla and the other popular Kaiju maybe they would have had a real shot. Electrifying the water was also a solid plan and they really had Gaira pinned down at that point. It is always a little sad to see the Kaiju on the losing end, but it’s handled well. If anything you’ll just feel especially bad for Sanda at the end.

The writing here is pretty fun and the Dub always makes these Kaiju films even more enjoyable than they would be otherwise. The voice acting is just great. There’s a good blend of humor here while still staying serious when the situation calls for it. The police chief breaking into the room and forcing the guy in a coma to talk was just brilliant. Characters just push themselves through situations and that’s the kind of persistence you need in order to stay alive in these films.

The main cast is really small here, but that’s fine. You’re mainly here for the monsters after all and they appear within the opening 5 minutes. They showed up so fast that I was pretty impressed. Naturally there are still a lot of moments without them, but the humans can hold their own scenes pretty well I must say. There’s also one long song that comes out of nowhere. I can’t say that it was my kind of tune, but I’m still glad she managed to get out of there in one piece. For a second I thought she wasn’t going to make it out in time.

Overall, War of the Gargantuas is a solid film. I admit that it will have less replay value than some of the other Kaiju movies due to its sheer length but it is a good film. I think the best special effect in the film was the Octopus’ glowing eyes. It really made him look fierce and that’s why these Kaiju suits have all aged well. You just can’t beat that level of detail. If you haven’t seen this movie yet then I would recommend changing that as soon as possible. It’s really got everything you could ask for and while it may not ascend to the same heights as Godzilla or Gamera, it’s a great example of what a Kaiju film is. Show this to someone who is getting ready to jump into the genre and needs reassurance that the whole genre isn’t just Godzilla movies.