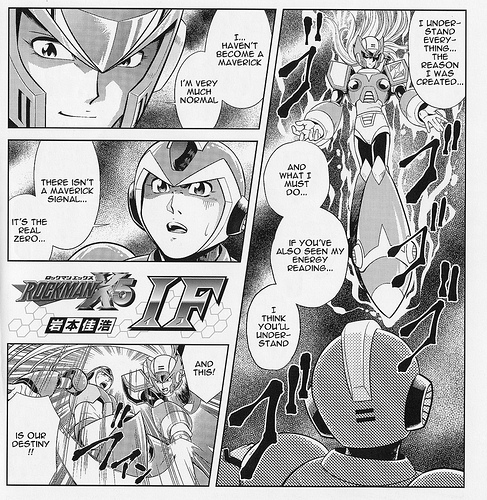 It’s time to take a look at a quick one shot that came out recently. It’s extremely short, but still gives us a quick battle so that’s always good. I can’t say that I remember X5 in particular too well as they all start to blend together from X5-X8 for me, but the Nightmare Zero saga was always fun with the cool boss theme that we got. In this manga, Zero has been turned over to the dark side and is trying to destroy X. X has to fight back, but can he save the partner that he once had? It’s a pretty emotional 8 or so pages.

As this is an IF title you can probably imagine that it went in a different direction than what happened in the actual game. Here, X manages to defeat Zero, restoring him to normal. Unfortunately X seemed to die at this point so Zero used his own parts to rebuild X. Essentially they are now one and the same although then the ending rewinds time a bit and we see that they will both survive. I’m thinking that the latter part is what actually happened in the game with the first ending being the IF that this manga is named after. If that is the case, then I do think that the IF path would make for a reasonable spinoff although I think getting rid of Zero like that would be a dicey move. Having both X and Zero around is part of what makes the series so fun in the first place.

The art is definitely quite good. The character designs are on point and the action is pretty intense. You will find no problem with this part of the story. The pacing is also fairly good considering the length. I do think the one shot should have been longer, but maybe this will inspire the team to make a true Mega Man X manga at some point. We’ve had a few in the past, but having a nice ongoing series would definitely be a good way to revitalize some more interest in the series. Not to mention that it would just be a lot of fun.

Overall, IF is a nice little manga. It’s not one that will really be remembered though and I can’t blame readers for that because it will be over in the blink of an eye. The best way to think of this is to look at it as a little short story that can be placed at the end of a manga. If you haven’t checked it out yet then I’d recommend doing so. Particularly if you remember X5 a little more than I do, you’ll be able to appreciate this alternate route more. I do think it’s nice that the title addresses how Wily created Zero. That’s an angle that the X games never went into and I think it would be pretty interesting. Likewise with Light building X. Times must have been quite dire in those days and that would be the perfect plot for a big budget movie. Have it start out with Mega Man being defeated and the world falling into ruin until X shows up to save the day. Boom, that could be film of the year!

Bass is back once again and he’s up against the mysterious shapeshifter known as X. X is a pretty good fighter and definitely not someone that should be underestimated. That being said, X isn’t a threat to Bass. Bass is the strongest being in all of media and he would be able to end the match in an instant. Bass wins.