Suggested by Sonic The Pokemon Trainer is a skilled fighter who even made his way into Super Smash. He commands the 3 legendary starters of Kanto although he only fully evolved one of them. That will be enough though as Charizard is hard to beat in combat. Furthermore, if Charizard is teaming up with Squirtle and Ivysaur then that’s going to be really difficult for Chikorita to deal with even with her evolutions. She won’t be able to win this one. Pokemon Trainer wins. 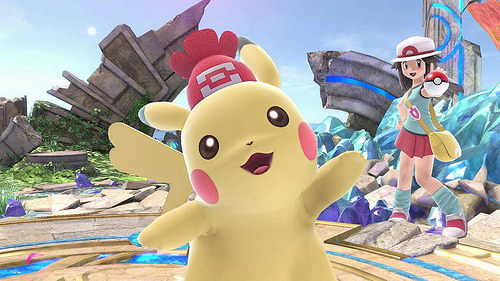 Suggested by Sonic The Pokemon Trainer is back and now that she has gotten Charizard back in Ultimate the squad is at full power once more. That being said, I think Pikachu could handle all 3 of her Pokemon. With his speed and type advantage Pikachu would be able to take out Squirtle almost instantly. Charizard will also need to keep his distance and while Ivysaur is a solid fighter, he also isn’t fast enough to keep up. Pikachu is vastly stronger than most Pokemon and only a handful can even hope to keep up with him. He won’t be losing anytime soon. Pikakchu wins.

The Pokemon Trainer is back to get another win and cement himself in the positive area of the blog records. James Bond is a tricky fellow with all of the equipment that he has accumulated over the years, but it simply won’t be enough to stop the Pokemon Trainer. This kid has caught three Pokemon so far and they will be able to lead him to victory! James Bond simply isn’t quick enough to dodge their attacks. Pokemon Trainer wins.

The One Above All may have fought many times on the blog, but it’s hard to say whether the extra experience has actually managed to help him or not. After a while, yous simply can’t absorb much more experience right? The One Above All has fought well over 100 fighters at this point and grabbing a win is still difficult. He may be able to last a minute here, but a quick punch will take him out. Pokemon Trainer wins.

With Smash Bros expanding its ranks with more characters who don’t necessarily have their own name, it’s about time that the Pokemon Trainer joins the fight. Naturally, he can only use the three Pokemon from Super Smash Bros as this will make him The Pokemon Trainer instead of a Pokemon Trainer. If he appears from another region in another Smash Bros…well, we’ll look at that once it comes! (But will likely be added to composite anyway) Either way, the Pokemon Trainer is a pretty brilliant fighter, but he’ll need some more weapons if he wants to match up against Bass. A quick Earthbreaker should do the trick. Bass wins.