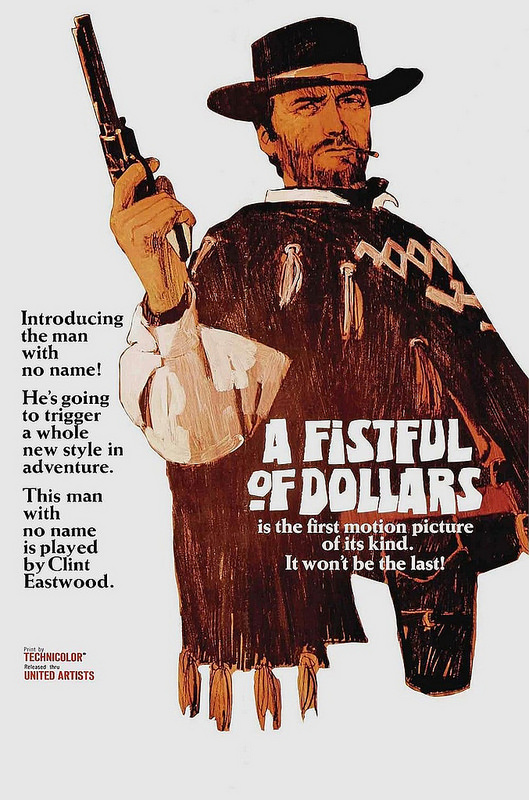 It’s time to look at an old Wild West film. I’ve never been a fan of the genre. It’s just not my thing as the scenery isn’t all that engaging and everyone always seems to be pretty unlikable here. Fortunately this one was actually pretty decent all things considered and I may go as far as to say that this is my favorite Wild West film. It’s just more enjoyable than the average one and there is quite a lot of strategy going on here which is always nice.

The film starts off with our nameless hero wandering into a corrupt town. There are two factions here which are always battling for control. They are the Baxters and the Rojos. The Baxters are technically the Sheriff group so you’d think they would be the heroes here but considering that they’re all bullies who like shooting everyone up then I guess that isn’t true. The hero decides to take both families down by pitting them against each other. In the process perhaps he will be able to save a couple who has been separated by the warring factions. (Not that they each joined a squad but that the Roja’s have split them up for their own amusement.

A good chunk of the film is about the main character lying to both sides and getting them into trouble. Naturally there is no reason to feel bad for any of the people that he is tricking because they are all bad hombres from the start. He grabs two dead Mexican cops and plants them in a grave yard which causes both groups to want to reach them in time. I can understand the Rojos wanting to silence them but I don’t really see how this would help the Baxters. They are hopelessly outmatched against the Rojos anyway. Why wouldn’t the Baxters go to the next village to grab some cops if they really needed backup? I feel like that would have helped out a little unless they were worried about being undermanned at the village for any amount of time.

One scene near the end of the film is a pretty big stretch though. The hero frames the Baxters again so the final 4 Rojos decide to go to their base and murder them all. The Baxters are supposed to be decent fighters in their own right…right? Well, they manage to somehow lose a 20+ vs 4 battle which is just shameful. They keep running out of the house without their guns or at the very least without any kind of aiming skills. At most you can see the first few members falling for this but we’re talking dozens here and the scene lasts for a very long time. They just keep running out of the house and getting shot. At least take one or two guys down before you die. Going out like that is just embarrassing. It would be tragic if the Baxters weren’t such bad characters.

Naturally there is no reason to like the Rojos either. The main villain is pretty much your stereotypical gang leader who is only concerned with getting money and messing everyone up. At least he is able to plan better than the Baxters though. Still, the only 3 good characters here are the main character and his two pals. The more minor of the two is the coffin maker. He doesn’t do a whole lot but ends up playing a pivotal role towards the end of the film. Then you’ve got the bar owner who helps the hero out a lot. Naturally this ends up being a pretty painful experience for him which is always the case when you ally yourself with the main character. He stays strong throughout though and is also a pretty good shot with his gun.

Finally there’s the main character although I think I’ve already mentioned that he’s pretty solid. This guy knows how to plan and he’s a very quick shot. He manages to take down multiple opponents quite a few times. Without his gun he can still put up a fight although at that point trying to fight a 1 v 4 is basically impossible. He also gets put through the wringer here as the scene where he is beaten by the group is quite intense and certainly lasts for a long while. The film can get pretty gruesome although that’s to be expected. It’s another Wild West thing. Still, it could have been worse.

Aside from the violence the only other aspect of the film that can hurt it is essentially how the villains are winning for 99% of the film and by the time they are defeated there isn’t much left to save. It always takes a bit of the triumph out of the victory because the villains got away with so much before finally being taken down. That’s just how it is sometimes I suppose, but it’s also fun to see the hero swoop in and save the day before all of the damage has been done.

Overall, A Fistful of Dollars is a Wild West film that manages to tick off the usual boxes without making too many mistakes. The film doesn’t particularly drag on and having a good lead is certainly important. It can be annoying to see the entire town corrupt as it is said early on that basically everyone else has already been murdered. Without the main character around things would have definitely gotten a lot worse. By the time the police actually get ready to show up as the film is ending you know that they were just way too late for it to even matter. I’d recommend checking this film out. You’ll see how to properly do a quick draw.