This review is of the edited TV-14 version of the film below. All thoughts below should be addressed as such as a review of the unedited version may be more negative 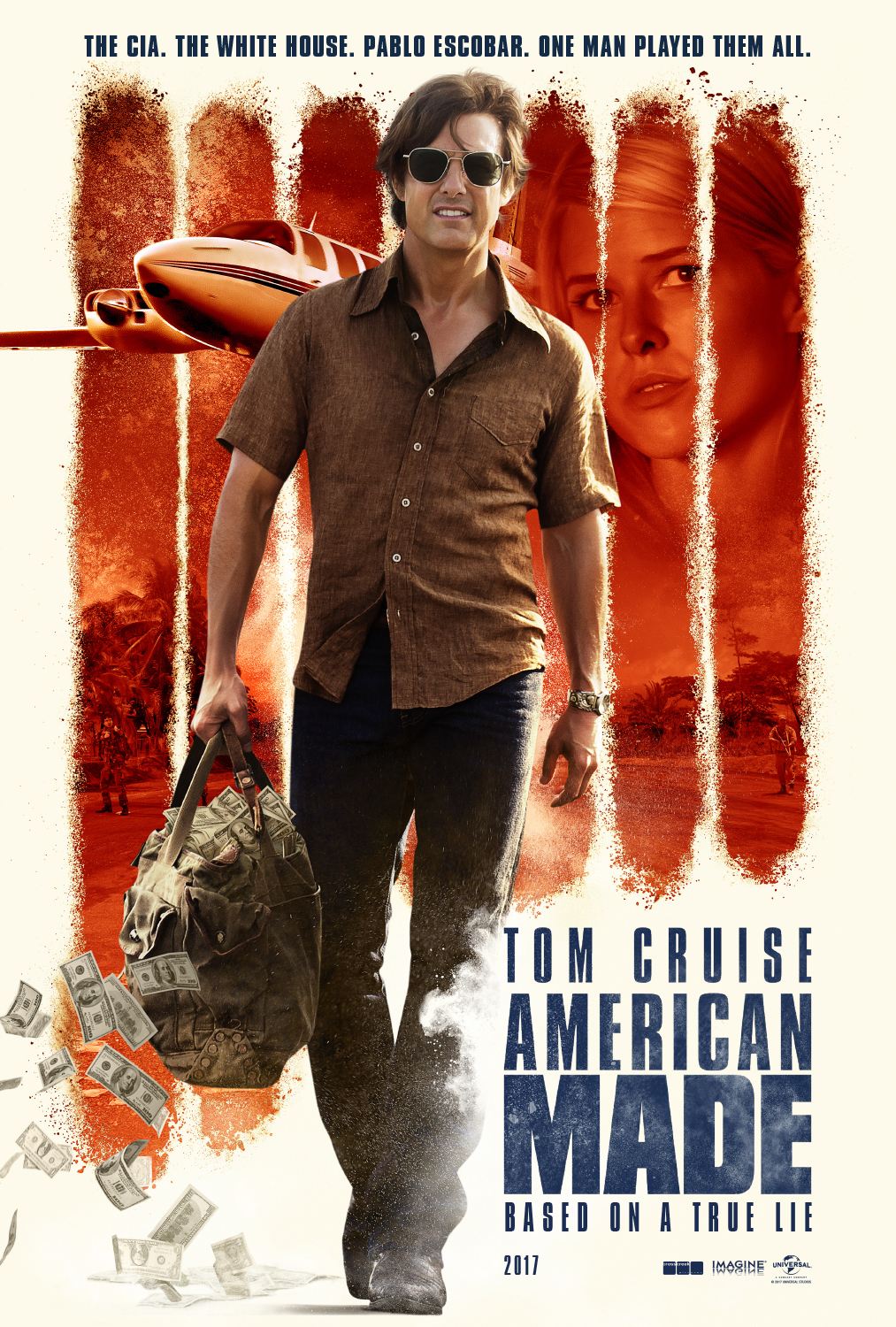 American Made is an interesting film about trying to play all of the sides for as long as you can. Ultimately this will pretty much always lead to ruin so the movie’s really about seeing how far he can go with this. The film is based on a true story but loose enough where I figure I’ll still do a review here. It would have definitely been something if all of this had really happened.

The movie starts off by showing us that Barry is already in the illegal business of smuggling cigars to people while on his flights. This catches the CIA’s attention and they remind him that stealing and smuggling is okay as long as it’s for the good guys. They will pay him poorly to smuggle a lot of things for them. Barry accepts although it’s not like he has much of a choice. When he arrives at the gang hideout with the items, they convince him to start smuggling for them. Why not right? Then the DEA wants a piece of the action and before you know it Barry is working for all of the good guys and bad guys. It’s going to be rather difficult to get out of this predicament.

Barry’s a charismatic guy and that’s really how he has lasted so long in this rough business. as always it is a matter of time before someone catches you when you’re cutting corners and committing crimes but he would have been caught sooner if he wasn’t so smooth. At the end of the day he just really wants to be rich and doesn’t even hide the money all that well. When he starts raking in the cash there is so much money that it’s flooding the house, the family gets a super big house, a pool, etc. Barry likes to live large and in charge that’s for sure.

He’s a fun lead even if he isn’t heroic. That’s good since a film like this really needs a good lead as otherwise you would run the risk of this guy not being sympathetic at all or just rooting for him to get taken down already. As it stands, you’re invested in what is going on here. The cast is rather small though. I mean there are quite a lot of side characters but for the main ones it is relatively self contained. You’ve for Barry’s wife Lucy who isn’t really thrilled at all the secrecy initially. It’s not like Barry told her about his new job at the CIA so when he just vanishes like that it isn’t easy on her.

In one scene she even throws away all the food he brought home. It’s an emotional moment of course but I always feel bad when that much food is tossed aside. It had to be a lot of work to get that and you can’t let good food go to waste like that right? I dunno, I thought the food could have at least been saved. Otherwise Lucy takes it all in stride once Barry actually explains things. She cracks a bit near the end with the jewelry but lasted well for most of the journey.

Her brother JB is one of the most annoying characters in the film though. He’s just here to complain and get a free lunch. He doesn’t contribute at all and makes the worst decisions possible. You definitely know he’s doomed by the end as he starts creating a lot of scenes and even attempts some blackmail. Game over JB, that’s the match.

Barry’s boss Schafer was fun though. He may seem rather slippery and untrustworthy but from the start you get the feeling that he will act as if he has no knowledge of Barry if things go sideways. I would say it’s one of those things that is just understood. Naturally he also gets to take the credit so Schafer really has it easy here. At the end of the day he never has to go into the field or take any of the risks. All he has to do is claim the spoils at the end. It’s a really good setup.

As for the two main weapon/drug dealers who worked with Barry, they seemed nice enough. Of course you never quite forget that they are villains. It’s one of those things where they don’t act overtly evil but just knowing what they are doing shows that they aren’t exactly the good guys here. That pretty much wraps up the cast, it’s a fun group of characters I’d say. Definitely couldn’t consider any of them to be weak ones.

Another good aspect of the film is that the movie balances the humor and serious moments rather well. There are quite a few scenes that should at least have you crack a smile. Barry coming prepared with the Baseball bat after being robbed the first time was definitely a solid scene. Even when things aren’t going well for Barry there’s always a humorous undertone surrounding the movie. It was executed quite well and the movie already had good pacing as it was. Throw in the solid writing and a film that could have easily been more on the dull side ended up being a lot more interesting.

Overall, American Made was better than I expected it to be. I wouldn’t say it had any serious weak points to it. It’s not like I would say the movie is great or anything but there wasn’t a point during the experience when I was bored. It just passes on by rather quickly and you should be satisfied at the end of it. I think in some ways the movie could have gone a little more all out with how crazy it could be if it wasn’t trying to be based off of a true story though. The ending was rather intense though and it does seem like the gang has a whole lot of influence. Even the whole thing with the courts felt like it was rigged for Barry to fail.