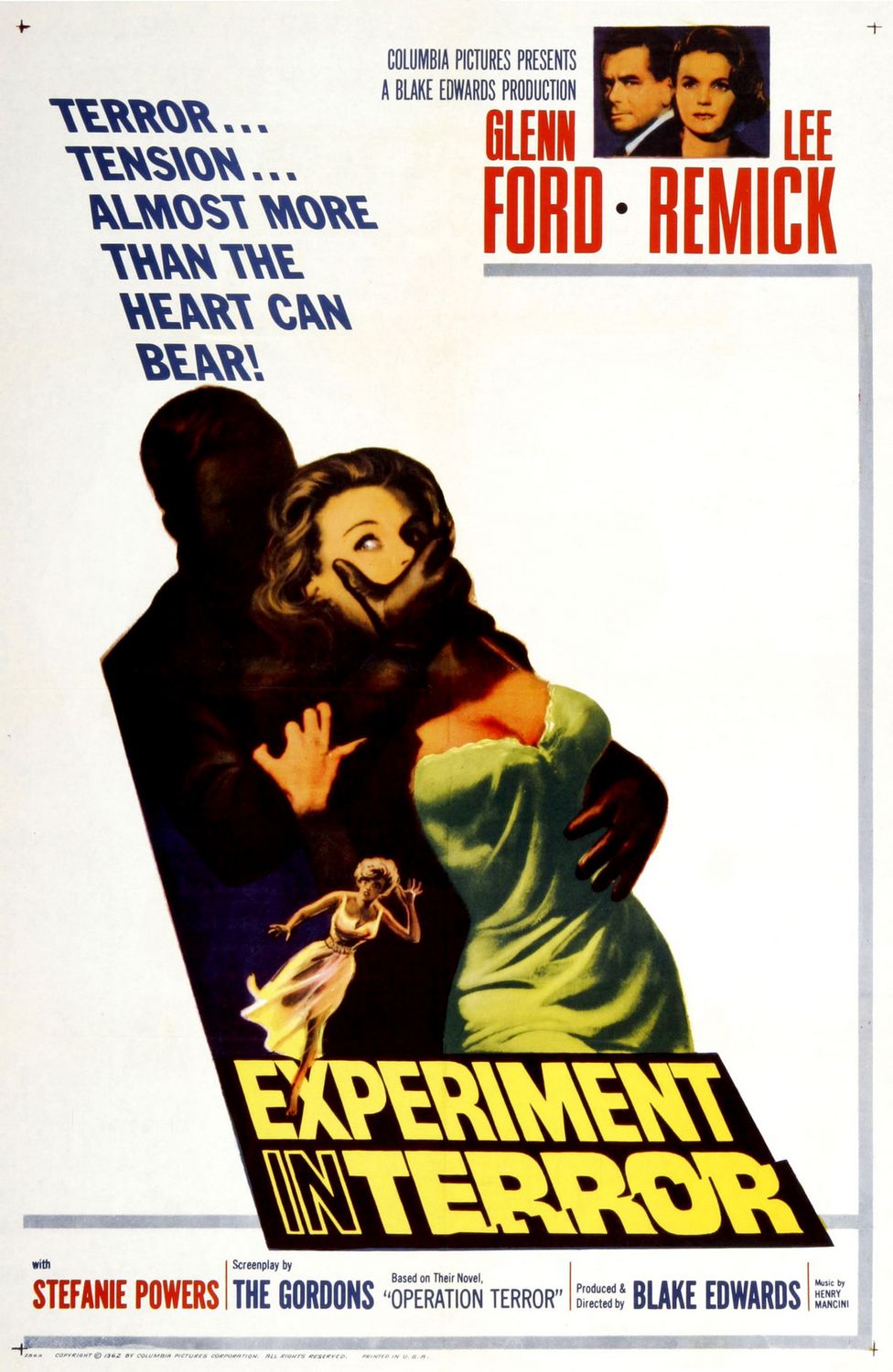 It’s time for a noir murder mystery. This one even brings in the FBI and it’s interesting to see how they’re portrayed here. Nowadays it feels like the FBI is more secretive and if you call in you likely aren’t going to go all that high up. Granted, it’s not like I’ve ever tried. In this film you can casually fall them and someone will get on your case ASAP. In a way they feel more like a branch of the police. The film has its moments and some good detective work, but some parts really hold it back.

The film starts with Kelly getting into her apartment, but she is then put in a choke hold by a mysterious man behind her. He has a breathing issue and the camera is always zooming in on his mouth to up the creep factor. He tells her that he wants her to rob a bank for him so he can get rich or he’ll destroy her and her kid sister. After he leaves Kelly does try to call the cops, but she is taken down again since the guy apparently didn’t leave. Kelly will have to be careful about how she plays this because one wrong move could be her last. Fortunately FBI Agent John is on the case. Even though the first call was broken up he was able to be re-connected and will now aid her in identifying the man while keeping her safe.

As a noir thriller this film definitely still works. There’s always a sense of danger in the movie and the pacing is pretty solid. The film is careful to not really give you any clues as to who the assailant is. It’s not really a traditional mystery though as you’re not supposed to solve it. The FBI get clues and move in but it’s not like you have 5 suspects running around. The guy never bothers to show up in person at all. He’s already got a reputation in other places so there is no reason for him to do so.

The FBI also look pretty good here. John is quick on the uptake and doesn’t put Kelly in any more danger than necessary. All of his plans are as careful as can be and he does try to get the upper hand. I would argue that he can be a little short sighted at times though. His priority is saving Kelly and while he does a great job of that, he doesn’t really try to protect the others much. Her sister, the informant, and the other caller are all left defenseless while he pursues his main goal. The guy can’t be everywhere though so maybe the bureau should have just assigned more men to the case. I imagine they were spread pretty thin as it is though.

Unfortunately the film does go out of its way to make the villain pretty sketchy though. One such scene is when he has the sister strip. This is partially to mess with Kelly mentally as well but such a scene could have been handled a whole lot better. Given the guy’s past criminal history which is briefly brought up you can definitely tell that he’s a bad seed. This is just the latest in his crime spree and it’s good that the FBI were finally put on the case. I would have liked to have had a better villain though. Take away the breathing issue, work on the camera angles a bit, and make the villain have a better motivation. That would go a long way in helping the thriller get to the next level.

Meanwhile, the informant also does good by the end. He had a good run although his final scene is just a little off. The whole method of spying on the phone doesn’t seem too practical. I don’t see how he wasn’t caught during the many times he would use it. He made the tough calls by the end though. Then you’ve got one of the villain’s allies who has a son in the hospital. The villain has always been kind to her so she refuses to sell him out. There can be a lot of reasons as to why he never tried anything here and ultimately it doesn’t matter. As John points out, just because the guy is nice to her it doesn’t override the fact that he has murdered a bunch of people. She’s an accessory at this point either way.

One character you’ll feel bad for is the first lady who comes to the FBI because you know she is doomed from the start. At the same time, she handled the whole situation horribly and should have still been alive. There is no reason why she could not tell John at the station. I suppose she had crimes of her own but wouldn’t it be better to take the villain down and serve a little time? She could also say she had been under duress at the time and that probably would have been true to a large extent. Instead she heads back home to her secluded place where the villain has presumably already broken in several times. I can’t understand her rationale no matter how much I try to think about it.

Meanwhile Kelly does a much better job with her situation. She keeps the FBI in the loop and also tries to advise her little sister on how to act. It’s a pretty scary situation for her but she never cracks and does her best to stay on top of things. She probably tried calling the police a little too quickly the first time even if she had thought he left, but at least that also shows she wasn’t going to listen to the villain for a second. If someone tells you not to call the cops that’s usually the perfect time to do so. The threats get stronger the longer you isolate yourself from those who can help.

The film also does give us an explosive climax with a baseball stadium and a lot of shooting. The villain definitely made it surprisingly far at that point, but fortunately the heroes were ready in the end. I think with a chase scene like this there will always be times where you think they could have caught the villain sooner and you’re probably right. At least he didn’t get away, now that would have been really dicey.

Overall, An Experiment in Terror is definitely a thriller fans of the genre will want to check out. It’s definitely intense and is a fairly realistic look at a hostage type situation. If anything it’s probably slightly easier than in real life since you probably wouldn’t have any FBI backup. The villain is really the only aspect that drags the film down as it goes a bit overboard in trying to make him as repulsive as possible. All of his scenes are pretty iffy and tend to drag on. I suppose for thrillers I prefer them from the point of view of an action hero or someone trying to escape danger, but there’s a lot of different paths in the genre. I expect you’ll know if it’s your kind of film from the plot summary right away.