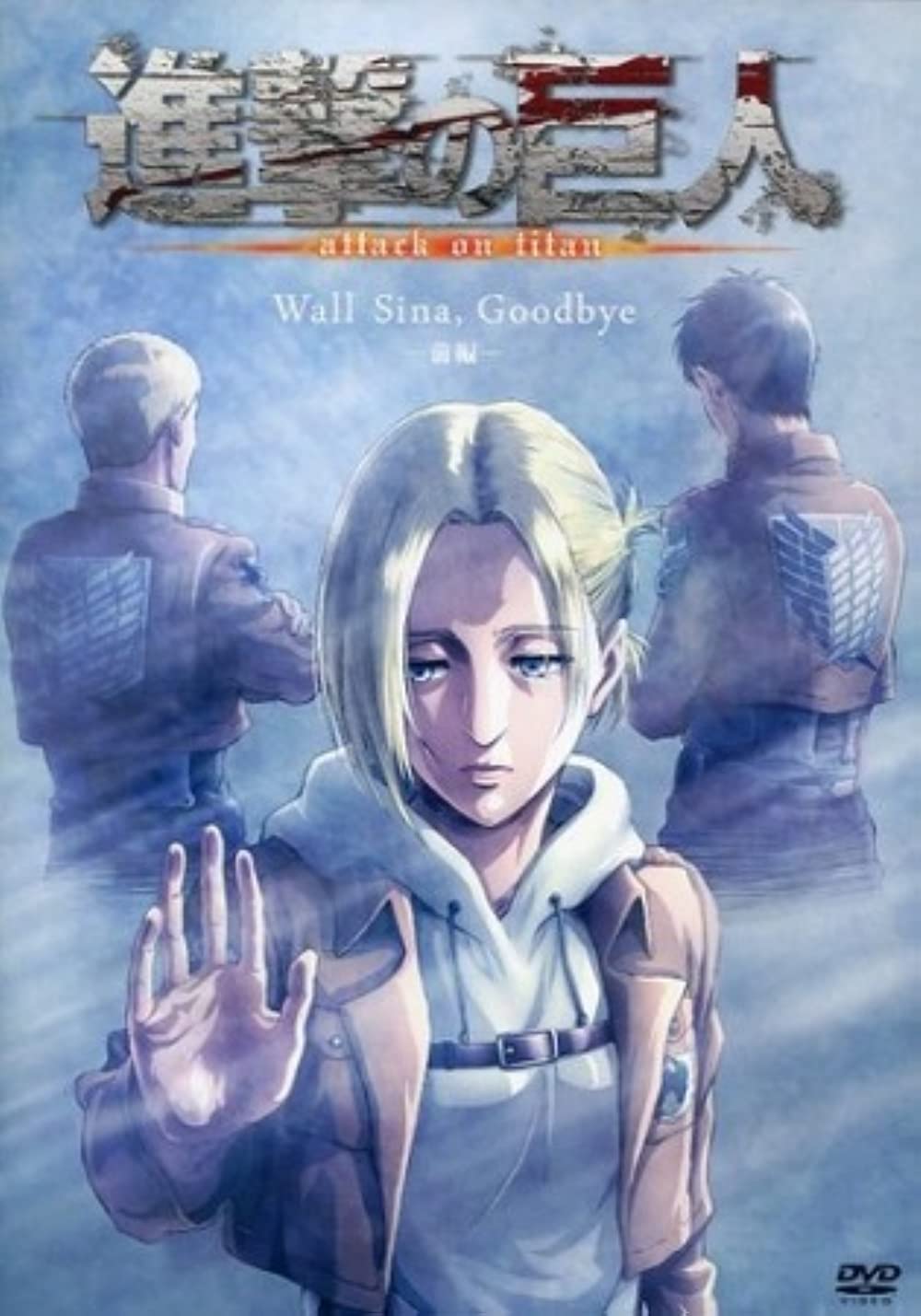 It’s time to take a look at the Lost Girls OVA that came out a while back. This one mainly focuses on Annie and Mikasa in side stories outside of the main story. One of them even works well as an AU of sorts that helped with the timeline theories from way back when. It always feels a bit odd to have a Titan story without the Titans really doing much here but it’s a good way to get some character development in and I can’t say that I really miss the titans must at all.

The first story focuses on Annie and it’s a two part adventure. Basically it’s almost time for her to pull off her plan of betraying the Survey Corps and kidnapping Eren but she needs an alibi and so she asks her roommate to cover for her as she takes a day off. The roommate says sure…as long as Annie does her a favor first. In this case it’s following up on a missing persons report that the girl just left hanging. The Military Police have a rather bad reputation of being extremely corrupt and not doing anything about it so Annie’s expected to just do the bare minimum but she has some free time so why not right? She is at a disadvantage though since the events happened a few days ago but she will give this her best effort.

So this is a detective story through and through. We get to see Annie checking around the city for any trace of Carly (The girl who vanished) and asking around. Most people would be far too scared to do anything like this because the city is so shady that you could die at any corner but when you’re a living titan with regen that makes things a little easier. Annie also knows a lot of hand to hand combat and takes out anyone who messes with her. The thugs of this town will certainly know not to mess with her next time. She uncovers the clues rather quickly and then has to decide how to handle this.

It’s not as simple as just solving the case since she can’t be tied up with any extra details when her mission is the next day. Additionally this isn’t just someone getting lost. It becomes clear that Carly disappeared deliberately so that also complicates things. Annie is quite efficient at solving the case though to the point where I thought this was only a single episode before checking and seeing that it was two. The mystery was handled well though so this was a good pair of episodes.

There were a good amount of twists and the writing was on point so it kept your attention the whole time. The animation looked good and the soundtrack was on point as well so definitely no issues there. Carly’s father was also a good character. I liked how perceptive he was. He wasn’t just some NPC to be tricked or discarded. Instead he had some good insight of his own and made sure that he wasn’t just being led around the whole time.

Meanwhile Carly does well for herself too. I wouldn’t say she is quite the strategic mastermind that the father is, but she was clearly able to strategize enough to pull off this whole plan so that’s impressive enough in itself. Then Annie did good in actually solving the whole case. In the end it’s one of those case where all of the characters are being rather corrupt and acting like criminals but I would expect no less from the world of Attack on Titan. After all, even the investigator herself was a titan traitor so that’s just how the ball bounces.

The only part of the special that may make you think twice is when Annie transforms for an instant near the end. No way the people of the town wouldn’t have seen that with such a large/bright flash of thunder. As a side story you want to make sure you don’t mess with the main timeline and I feel like this definitely does. The odds of nobody else seeing that is slim to none. You’re definitely going to notice that and so they probably should have had Annie win this without transforming. Sure, I bet they wanted to have her use the power at least once but it is a potential issue there.

The final story is about Mikasa and this one gets really trippy the whole time. You get lots of flashbacks, flash forwards, this is partially an AU and so everything is odd. There are random flashes of different times that Mikasa will get. Now this is fun for theory crafting and foreshadowing for sure but you definitely need to be ready for it. I was having a good time with it all the way through though. The actual main plot though is that Eren is coming up with a Hot Air Balloon so that he can finally escape this city and see the rest of the world. Mikasa desperately wants to go too so that she can always be by Eren’s side but a clown stands in her way. If she doesn’t get by him quickly then it’ll be too late. 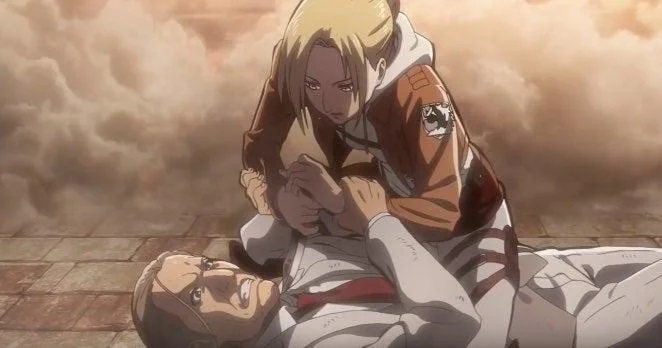 This clown guy is definitely a rather odd figure. So his goal is to make Mikasa murder him and he figures he’ll prove that he can use his magic to corrupt anyone. Mikasa is just a little girl at the moment after all so this should be seemingly impossible. The anime uses a lot of fun effects to make this guy appear as deranged as possible and it definitely gets rather spooky. More props to the animation with this and the whole thing is framed very dramatically. It’s an effective way to use a short bit of time and make it intense.

Then by the ending we see more of how this is an AU although the balloon was a good first guess on that. It’s a solid special that may not be as important as the Annie one since the things there actually happened but it’s an interesting look on how things could have gone over here. Eren is just as ambitious and single minded as ever so the guy is always in danger no matter what timeline it is. The idea that the characters can see other timelines while they’re dreaming or asleep was always a good one. It’s nostalgic thinking of all the Attack on Titan theories from back in the day.

The animation for both specials is good as I mentioned earlier and the soundtrack is on point too. It’s a nice complementary piece for any fan of the series and I’d be cool with more OVAs for smaller adventures like this. You could probably have a lot of fun with it while keeping the Titans out although the series doesn’t have the most interesting cast so you probably would want to keep it to these characters and Eren. Not sure there are more than 3-4 other characters who could hold their own episode like this.

Doing more mysteries is probably the easiest way to generate more stories unless you want to do more AU type stories. The reason being, it’s not out of the question for the survey corps and military police members to have some down time between missions. There are quite a few empty gaps in time during the series and with the sheer amount of crime and craziness going on in the city, it would be believable that they were short staffed enough to add the characters in. You probably would want to keep it to short one shot adventures though instead of going for the big conspiracy mystery ongoing though because otherwise then you start to make things a little tricky. Having Carly’s father return would be fun as well. 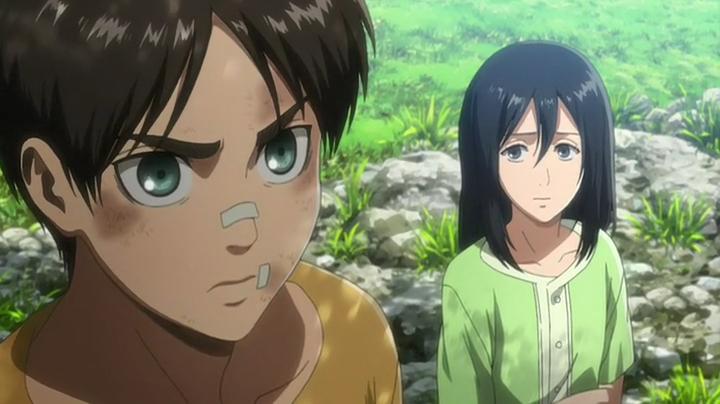 Overall, Lost Girls is a good OVA. The title may not make sense in a literal sense but maybe what they’re going for here is how both of them have lost their purpose at the moment. Annie is being a traitor but doesn’t really know why so in the meantime she’s solving a mystery case. Meanwhile Mikasa is lost in a whole other timeline but rolls with it in order to save the day. At least that would be my interpretation of the title. There may not be much action here but the OVA is still interesting so I’d recommend giving it a shot. I think you’ll have a good time watching it.