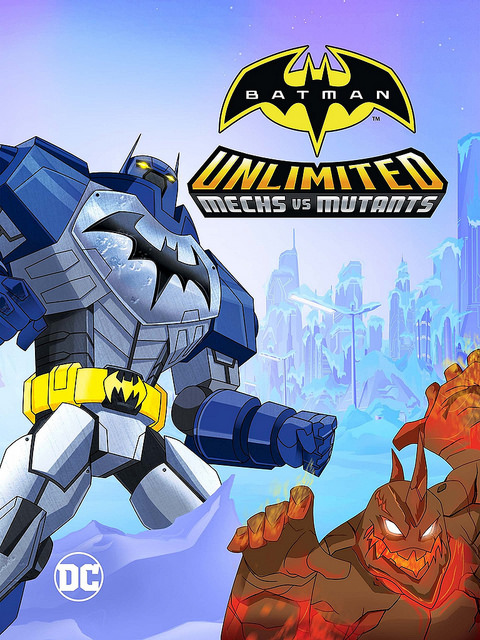 Batman Unlimited was a fun experiment by DC. It’s basically what you get when you mix today’s animation with a far lighter 80’s Batman tone. The first two films were solid. On one hand the designs could use some work but on the other you are getting quality fights without having to worry about the film going all in with violence. This installment ends the trilogy on a high note as it is probably the best of the 3. It’s quite solid and I’ll miss having the gang around.

The movie’s plot centers around the Penguin and Mr. Freeze. Freeze wants to stop some nearby ships and Penguin wants to rule Gotham. As such they form an alliance and Penguin teaches Freeze how to be more ambitious. The icy villain quickly becomes good at this. Meanwhile Damian is having a rough start as Robin since Joker humiliated him on TV. He is determined to get better though and this latest threat to his city could be a perfect opportunity.

I’ve probably talked about this in previous installments but I really like how Batman Unlimited basically has nonstop action throughout. There aren’t many breaks for talking at all here yet the movie still does build up a very complete plot. Who doesn’t want to see Batman in a giant mech suit fighting a Godzilla homage? The concept of having robots vs monsters is certainly a classic one with Pacific Rim being the latest big film to bring attention to the genre. We also get traditional Batman style fights like the Arkham battle where Batman and Robin face off against the villain group. It’s a fight where you get the feeling they will lose from the start since it’s too early for the villains to be defeated, but it’s a fun fight nonetheless. Honestly I think the heroes were pretty well matched up against the villains.

As always the animation is pretty solid. It looks like a main line DC film except for the fact that the character designs are quite different. Some can be a bit off putting, but at the same time I wouldn’t call them bad. Batman’s (Bruce Wayne form) for example looks like something out of Space Dandy or Johnny Bravo. It’s a bit of an odd look for his Bruce Wane persona considering you’d expect something a bit more formal. Still, when you’re rich like that you can dress however you want with whatever hairstyle you want so it’s not as if it’s unrealistic or anything. Anything goes in that scenario. The fight scenes are pretty sharp with a lot of vibrant colors. I think with some fine tuning this could even be a decent basis for a Batman anime of sorts. The scenes when inside the mech could certainly work.

There’s not much of a soundtrack so I’ll skip over that. Maybe the sequel would work on that. Green Arrow still gets shown up by Batman the whole time here. It gets to the point where I feel like he starts to acknowledge this by intentionally trying to sabotage Batman. Keep in mind that even if this is for humor such a stunt can easily cost lives when up against villains. Batman and Robin were getting ready to sneak up on the villains when Green Arrow broke through the glass which announced their presence. Somehow the villains didn’t hear them but you can still see what Arrow was trying to do. Additionally Arrow tries to prevent himself from getting one upped by ordering his own mech suit. Unfortunately for him it simply wasn’t strong enough to win any fights so once again he had to watch Batman come to the rescue. Green Arrow takes all of this pretty well though and overall I’d say that it was one of his better incarnations. It’s not all about power after all so as long as he’s still cracking jokes and trying hard that’s a start.

Meanwhile Damian has his own plot about trying to stay out of Batman’s shadow. He’s the newest Robin as the others have all graduated and gotten their own titles. At first you may even think that he is Red Hood or Red Robin since the costume is basically the same but it turns out that it is Damian. This also helps tie in to the main titles where Damian is currently Robin. He’s a pretty good Robin. You can’t help but feel bad for him during the intro since losing to Joker while being recorded on the internet was a pretty hard blow to take considering it was his first real day on the job. He does his best to improve and study from there. Damian never makes excuses for himself and I’d say that he has a lot of potential if we do get another installment.

Nightwing gets a small role near the end, but ultimately is just here as a cameo. As always Batman’s quite excellent here. He’s got everyone right where he wants them and reminds the other heroes that you don’t need powers to win fights. He’s pretty strict with everyone but never comes across as fair. I think Batman’s character is usually consistent in the movies and that doesn’t change here. He’s just as fun as he always is. As you can tell the character cast here was quite solid. I’d thank the writing for that. The film always seems to be on point and with its short run time the pacing is also good.

As far as the villains go they were solid as well if not a little less impressive. I was pretty surprised to see Chemo since he’s pretty obscure, but it was nice to have him on board. Clayface and Chemo both get their giant monster fights, but don’t do much beyond that. Bane and Killer Croc have a big rivalry going which was fun. I’d probably go with Bane to win that fight ordinarily but it seems like Croc had the edge this time. I suppose since he also had an energy blast he was the more dangerous fighter. Those two were the highlights from the main villains. Of course Penguin is always fun though and is typically one step ahead of the other villains. Mr. Freeze is quite a bit different than usual. His character arc could be a bit cheesy as I think he just didn’t think his goals enough. I hardly see why he would want to help at the end even after Batman’s explanation. Sure, it wasn’t really his plan anymore but the end result was the same. For the villains with smaller roles Joker certainly stole the show here. He had some great moments including his final scene. It shows why you really don’t want to mess with him as a villain. It’s always going to come back to bite you.

Overall, Batman Unlimited is most likely over with this film. It’s a trilogy that probably won’t be remembered very much by the fans but I’m glad that we got it. It’s certainly one that I would recommend and it really delivered on what the core of the project was…a good excuse to bring Batman and the others back for quality action scenes. Also the cliffhanger wasn’t all that exciting anyway so if the film decided to bring back Clayface it’s not like we would have missed much. His abilities can make him a very dangerous opponent I suppose, but his fight scenes wouldn’t be quite as hype as the ones we got here. If we do get a Batman Unlimited 4, I want to see all of the Robins team up since Red Robin missed out on this adventure.