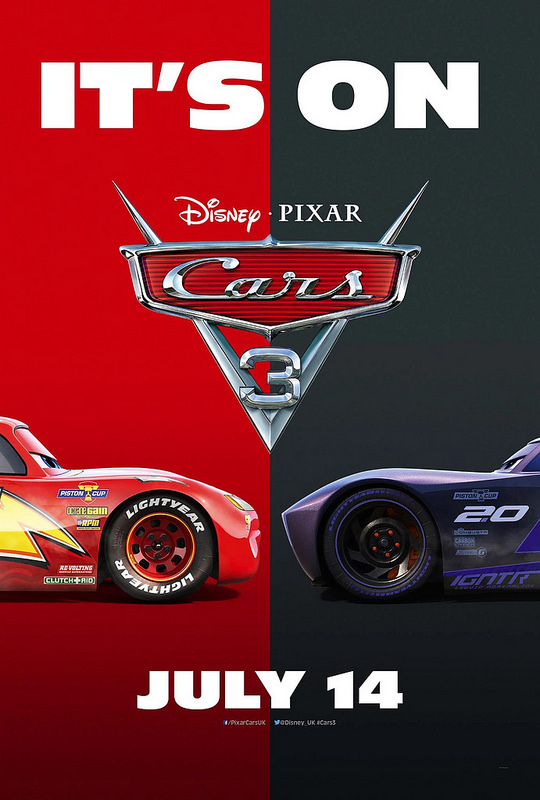 It’s time to take a look at the end of the trilogy. Cars had a good run as there aren’t too many Pixar films that have gotten two sequels. That being said, while the final installment is pretty solid, I’d still say that the original Cars is the best one. This film just had one thing that went against it, but it was a fairly big thing, the ending.

The film starts off with Lightning McQueen in a big race. He is at the head of the pack as per usual but then he is passed by Storm, a new kid on the block. The kid claims that he used to look up to Lightning, but that the main character is just too old to compete nowadays. He throws a lot of age related burns Lightning’s way and the lead pushes himself too hard as he tries to catch up and ends up getting into an accident. This leads him to stay out of the races for a few months, but nothing can keep Lightning down for very long. He decides to get back into the races and to do that he will have to use the latest training tech. His sponsors were bought out by a millionaire who loves the high tech stuff, but he may not be quite as nice as the older guys. At the end of the day, Lightning is going to have to prove that he has what it takes to get back on the track and claim victory.

The theme of the main character getting old and being surpassed by new talent is certainly a tried and true one. Rocky is certainly well known for doing it. We even get a lot of training for Lightning as he tries to get better although the film fumbles this part a little. Lightning’s personal trainer, Cruz decides to follow him and she doesn’t believe that he has what it takes to go all the way. As such, Lightning spends most of his time helping her out instead of actually training. He doesn’t get much faster than he was so in a way old and actually ended up winning this time. Lightning looks good during the final race but he doesn’t end up winning so that’s too bad. It’s not like he got a clean win in the first film either but at least it was obvious he was going to win and the crowd reinforced this. In this film Lightning was only projected to make it to the top 10 before he tagged in Cruz. To be clear, the point of this part of the film is that Lightning couldn’t train as much as he wanted too so that was the film’s intention. I just say they fumbled the ball because the plot took a different turn than I had been hoping for. I wanted the hype comeback story where Lightning wins and then I’d be fine with him retiring. Having him put it all on the line one last time would have been exciting. Maybe Lightning would have been able to take 1st or maybe not. We’ll just never know. As the ending played I thought that Lightning and the trainer would both be competing but under different teams. That would have been neat.

The animation is as solid as ever. The film’s definitely does a great job with all of the car designs and I still crack up at their facial expressions. Throw in the grins and you are constantly entertained. The racing scenes look really nice and the music is also pretty good. The film has an actual soundtrack which is nice. Cars 3 definitely did a good job on all the technical levels. Even the way everyone says “Lightning McQueen” is a lot of fun. I don’t know why but they always seem to taking a jab at him with the way they stretch out his name but maybe I am overthinking it.

As expected the writing is also really good and is a considerable upgrade from the last film. It is just really great to have Lightning back as the lead. He does a great job of looking like the seasoned veteran you would expect him to be at this point. The mind games don’t really work on him at this point and he doesn’t take his training for granted. Even his depression phase was quite small and he snapped out of it very quickly. I do think it makes the initial teaser very misleading as the crash wasn’t nearly as bad as it implied, but it was a good misdirect. After all, the crash still did happen so it certainly wasn’t false advertising. It’s probably safe to say at this point that Lightning is one of Pixar’s best leads.

The supporting cast is solid as well. They brought back Lightning’s rival from the first film and he definitely does not like Lightning any more than he used to. In fact I’d say his aggression has only increased with age and he takes numerous shots at McQueen whenever he is on the air. His segments are definitely a lot of fun and certainly is a highlight of the film. What you have to respect the most about this guy is that he isn’t trying to put on some kind of act. He is straight forward about how he doesn’t like Lightning and I dare say that he is the most enjoyable character in the film. It just doesn’t get better than this guy.

The new villain is also pretty solid. Storm thinks that the younger cars are the ones who should be on top of the circuit and is always throwing insults at Lightning based on his age. He has a great design and his speed is certainly the real deal. The scene where he is training and passes a hologram of Lightning is a lot of fun as well. Jackson is arrogant and extremely confident. Those are definitely qualities that you always want in a villain and he pulls them off very well. We have yet to have a bad enemy racer for Lightning which is pretty impressive. All 3 opponents were fun villains. At least this one doesn’t play dirty til the end so he did win all of his races with skill.

Finally we have Cruz. I’m afraid that her character was a bit of a miss since the movie tries to portray her as a prodigy with the oblivious nature of Mater. This isn’t a good combo for many reasons, one of which is that these character traits really clash. You can’t be someone who really knows what to do on the track and also not have any real common sense for new roads. When she heads to the beach for the first time she has absolutely no idea how to drive. Cruz can’t turn and falls in every puddle. She is exaggeratedly bad at being a racer despite earlier scenes making a point of showing that she was great at the simulator. Then she is supposed to be a great trainer who is great at helping any car get to the next level. She individualized the training for each car based on which obstacles they had which prevented them from getting to the next level. Yet, she could not do the same for Lightning and instead seems to be trying to sabotage his chances of being ready for the race. Perhaps the angle that the film was going for was that she was such a big fan of Lightning that she really did think he was too old and didn’t want him to tarnish his legacy. That theory is a bit of a stretch though and either way it doesn’t really help her case. The part of her character that had the most potential was her dream of driving but even that is a little murky.

When this plot was first introduced I figured that they were going to say that Sue wasn’t able to be a racer because girls weren’t allowed at the time or in her district. It would have been very disappointing for her and would have been a legitimate reason for her to have hung up the tires in place of being a coach. Instead, she was simply intimidated by the cars and quickly gave up. It’s hard to be sympathetic to her plight because it sounds like she never even gave it a second go. She couldn’t have been all that excited to be a racer if she gave up on her goal so quickly. At least for me, this twist weakened her story.

I should wrap up this section or it’ll start to be as long as the rest of the review! This is just my explanation for why her character was ruined out of the gate. Her personality and what we knew of the character completely clash with each other. She appears to be smart and competent in some scenes and not so much in others. You’d think that the film switched writers midway or at least made some big changes to he character. As for the other supporting characters, they were okay. We got a group of older cars who help Lightning get ready for the race with some motivation and a track for him to ride on. They don’t appear too much of get much of a role, but they seemed like solid characters. The other cars back home got their cameos in as well.

The only relatively weak part of the film is when the gang heads over to the underground racing arena where they fight a Magic School Bus homage. It’s not so much that this is a bad scene but it basically feels like filler and I didn’t care for any of the characters there. This was also during the phase where Cruz was pretty annoying. I suppose it was a good way of showing that Lightning is proficient in all kinds of races, but that probably could have been handled better.

Overall, Cars 3 is a good way to end the trilogy. If the story does end here, it’s not such a bad way to end off. Lightning still should have won the race and that would have solidified this as a great film and the best in the trilogy, but I suppose you can’t win them all. If you’re looking for a fun racing film with a good lead then you have come to the right place. What really makes Cars 3 so solid is the fact that the writing is certainly on point. It’s an enjoyable film even when not much is happening because the dialogue is good. That being said, the pacing is pretty quick for the most part. I would definitely recommend this film. It’s an all around solid movie.