It’s been a while since I went back to watch one of the old DBZ films. What better time than Christmas season right? This has always been one of my favorite DBZ films and it’s certainly the best one that didn’t feature Vegeta. It’s pretty short, but it makes for a pretty great film to check out.

The plot takes place after the battle against Frieza. Goku and friends decide to go on a camping trip to have some fun. It’s a chance to get away from it all and relax. After all, they may not get a chance with the Androids coming along to fight soon right? Things are going smoothly until Cooler and his minions arrive. The Z fighters are going to have to fight extra hard if they want to win this round!

This film is under 50 minutes so things have to happen very quickly. Cooler and his minions attack within the first 15 minutes and the fights really start heating up once Cooler joins the fray to fight Goku. Let’s face it…we’re all here to watch these two titans face off. It’s like watching a Justice League film. It’s great to see the other fighters get involved, but you can’t beat a scene with Superman fighting the powerhouse of the month. Titanic clashes like those are not easily forgotten.

The fight does not disappoint as Goku and Cooler wreck the area pretty badly during their fight. Cooler ends up punching Goku so hard that the water all leaves the ocean for a few minutes. That’s certainly impressive and it’s the type of physical feat that reminds me why DBZ is a cut above the comic franchises. They also get to display their speed during this endeavor and then we are treated to a classic beam fight at the end. The fight really had everything that we could have wanted from DBZ as it even included the “This isn’t even my final form” routine.

The animation is pretty solid since Toei always knew what they were doing with DBZ. It naturally won’t look as polished as some of the latter films, (The first Broly film is the only one that was at a total theatrical level compared to the rest) but the animation is certainly above average. You can really feel the blows and the energy attacks look great. I still miss this classic animation from the 90’s. It was solid in just about every aspect of the word.

The soundtrack isn’t so great, but it’s tough to count it as a negative for the film per say since it changes depending on where you saw it. I recently saw it in the DVD (Movie Pack) version and the music is mostly uninspired. We don’t get the techno/rock themes that you’ve probably heard on Youtube and it just can’t keep up with the fights. They’re the kind of themes that make you think you were watching a silent film afterwards. They aren’t bad, but they just aren’t memorable. Of course, it could be that I’ve just heard them so many times while watching DBZ that they fail to register sometimes. Upon closer inspection, they do work sometimes…just not for the fights.

Cooler makes for a pretty great villain. He’s definitely likable and it’s hard to say whether he is…cooler than Frieza or not. They’re both pretty similar in various aspects although Cooler definitely has the better design thanks to his final form. Cooler’s ambitions are clear and he does want to beat Goku in a fair fight instead of just destroying the planet from space. His power is considerable and he wants to bring honor back to his family’s name. As far as the film villains go, he could be second or third. (Broly is naturally number 1)

Cooler’s minions are not very memorable. They strike a lot of poses like the Ginyu Squad, but they simply aren’t very charismatic. They’re seriously outmatched against Goku and even Piccolo can easily subdue them. I do like the concept of a Ki sword, but that’s definitely not enough to turn them into serious threats.

Piccolo is the only ally of Goku who makes himself useful here. Gohan unfortunately tends to get in the way and Krillin doesn’t even try to fight back. Piccolo definitely earns his keep though as he takes out several of the villains. This clears the way for Goku to deal with Cooler. Piccolo definitely looked good here and his fans would be proud.

Goku also looks even better than usual here. This was back during the Arc 1 days so he’s still a super nice guy who cares about the animals. I don’t think we ever see him get worried about the animals safety after this, but I suppose that it simply isn’t brought up. The movie did a swell job of punching the average film in the face by having an anti animal violence scene. That’s just one of the many things that makes this film a pretty big cut above the rest. You don’t really see that kind of thing typically. A bird gets injured and Goku quickly heals him before going off to fight against Cooler. Now that’s what a call a hero! He even gives Cooler a chance to back off before things got serious.

The one thing that is a bit of a stretch is the fact that everyone mistook Cooler for Frieza. They seriously do not look that similar at all. I can understand Goku mistaking him to an extent….or I can at least conceive the idea. I do not believe that Piccolo would ever make that mistake though. I guess they really wanted to cement how similar the two villains were, but that was just too hard to swallow.

Overall, Cooler’s Revenge is still one of the elite DBZ films. It’s only real negative is in how short it is, but that means that the film is mostly just one large action scene. We actually don’t have any annoying Roshi scenes to bog the film down either. This is basically a perfect film and it’s a model for how films should strive to be today. Goku’s Super Saiyan form never ceases to impress me and he looks virtually unstoppable while he is in it. After seeing his strength and speed I don’t see how anyone could say that Superman can defeat him. It’s hard not to bring that topic up whenever I talk about Goku. Either way, I definitely recommend checking this film out since it’s so great. It’s an easy 9 star film and it’s not even the best DBZ film! Stay tuned because I’ll be reviewing another DBZ title in the near future. 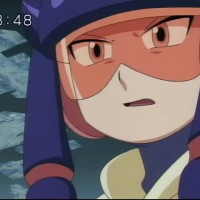