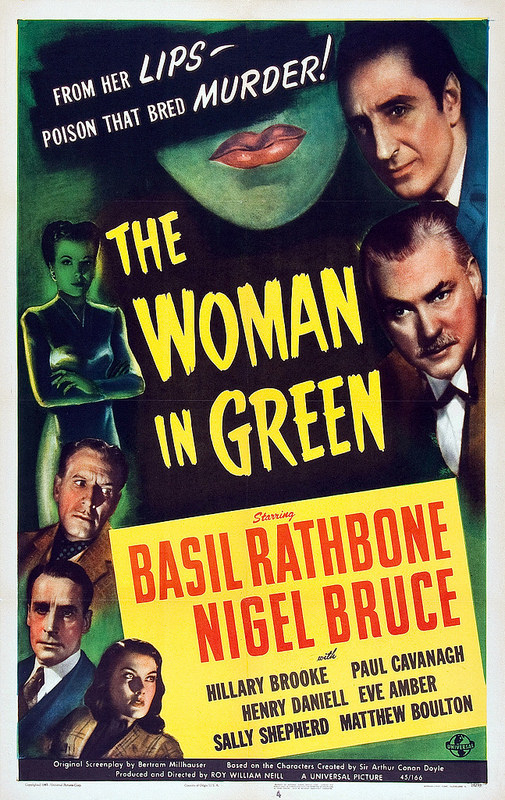 It’s time for the next installment in the Sherlock Holmes film series. This one is pretty solid as are just about all of the Holmes titles to be honest. We even get to see the return of Professor Moriarty once more as he proves to be the real mastermind. This means that the woman in green doesn’t get to be quite as important as she might have been, but still makes for a pretty good antagonist. The detectives have their work cur out for them this time!

The film starts off with a lot of gruesome murders occurring in London. Holmes is struggling to find a motive or something that connect the victims while Watson believes that it is probably just an insane villain. Coincidentally enough, hypnotism is starting to become popular and a lady named Lydia has been performing it on people. Watson claims that hypnosis is completely fake and wouldn’t work on anyone with an ounce of character, but is that entirely accurate? Only one way to find out!

As always Holmes is a solid main character who is good at staying one step ahead of the villains. While Moriarty has bested him in the past, I’d say that it was effectively a draw this time. That being said, Holmes’ final plan was rather risky as he left himself with no real out until Watson came. He would have had to try fighting 3 against 1 and even with his skills that may have been tough. I’m glad that hypnosis didn’t work on him though.

Watson is a blast in this film and I dare say that he might have even been better than Holmes for once. I definitely liked the scene where he starts to insult the hypnotists quite a bit. While he ultimately loses in that scene I do tend to agree with him. Hypnosis is not something that should work on anyone so easily. If you’re strapped to a chair and forced to watch a bunch of lights for days or something then that’s one thing. Looking at lights for a few minutes? Nah, I’m definitely not going to buy that one. A bunch of films portray it as some kind of super power that works almost instantly, but I just can’t buy into that. Watson was right even if the film made him appear to be wrong.

Lydia was a decent villain but not as good as the lady from a few films ago. Lydia is more of a minion than a commander even if the whole plan does revolve around her abilities. She does a good job in the role. Moriarty seemed to have a different actor in this film as he looked very different, but the personality was still the same as always. He really does have a flair for theatrics even though it ends up costing him pretty much every time.

As always the writing was quite strong in this film. The banter between the characters was on point and the mystery was fairly sound. It’ll keep you guessing for a little while until the film basically tells you who the villain is. Admittedly this is rather early on, but seeing the heroes try to solve the puzzle is fun as well. The pacing for the film is great and the movie never drags on. That is definitely how a good mystery film should be when you think about it. It’s gotta keep the action and tempo up at all times.

Based on how many times Moriarty has died you will probably be wondering if he is really dead by the end of this film. In truth he should have been dead quite a long time ago and it’s clear that the writers just like bringing him back. It’s definitely possible that he could return, but I wouldn’t mind keeping him out. He is a great rival for the legendary Mr. Holmes, but we’ve had quite a few other villains who were able to hold their own as well. After all, at the end of the day Moriarty is basically just a real smart villain who likes to banter. We can certainly find a few other villains to fit that role.

Overall, I would definitely recommend checking out this film. It may not have a whole lot of unique things going for it, but at the end of the day what else do you need aside from the classic Sherlock Holmes formula? No two mysteries are the same after all so by shuffling the suspects and locations you have created a brand new story. With the film series coming to a close I am glad that it has continued to perform at a top level. The film makes no real mistakes so it’s just a blast from start to finish. It’s easy to see why Holmes is still regarded as the best mystery franchise.