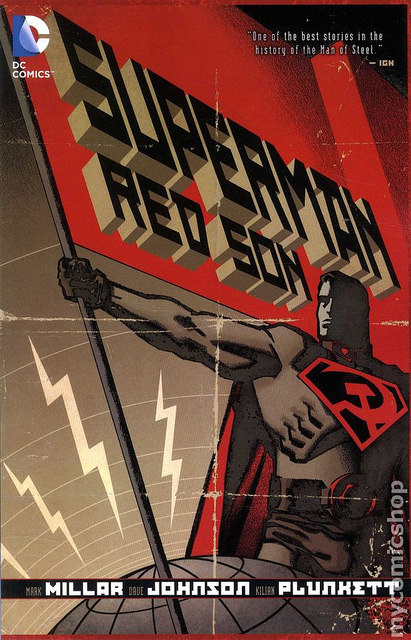 It’s time to look at a classic Superman title that takes place in an alternate timeline. What if the Americans had not found Superman? That’s a question that many people ask themselves and this comic is essentially an interpretation of that concept. Being American is a rather large part of Superman’s character if you ask me so the character would definitely be pretty different, but his actual character should still be very heroic and just. Nature vs Nurture after all and his good heart should win out. This book starts to have him jump the fence a little towards the end, but for the most part he is portrayed well.

So, the soviets find Superman and he grows up to be their nuclear deterrent. Russia becomes a super power and nobody dares to mess with them. Eventually, every country falls in line with the Soviet Union except for the good ole USA. We’re not exactly team players after all and the USA will never bow to any other country. America hires Lex Luthor to put a stop to the Superman problem, but can his genius pull it off? Meanwhile, can Superman truly create a utopia as long as humans exist? Within Russia, the Man of Steel has managed to eliminate just about all crime, but a lot of bad things still happen constantly over in America. Free Will vs Security is the debate that he must wrestle with here.

As mentioned earlier, the comic is fairly well written and ends up being very engaging as a result. It’s always fun to read a good Superman story and this was a nice take on his origin. Seeing the Superman and Lex debates were certainly fun…even if the Lex hype may have been a little too much at certain points. Really just one in particular. Before Lex can verbally debate Superman, Brainiac quickly shoots the genius because he estimates that Lex would have talked him into suicide in a few seconds. (or minutes) This is essentially meant to be taken as fact and Superman was getting crushed in every single debate he was in, but I like to think that his strength of will would be a little better than that. At least it showed how Superman knew that he was getting to be in a dicey spot.

At first, Superman acted like his normal self. He saved people in Russia and protected the country without actually harming innocents or destroying anyone. He defeated his share of villains and also took out the fake Superman and other opponents who popped up. (I did feel bad for the fake Superman though) Once he saw the poverty in Russia and assumed command…that’s when things got pretty dicey. The power went to his head and the change was rather fast. He started walking into traps and he turned Russia into a complete police state. The way he sacrificed Wonder Woman for his plan also wasn’t a very Superman-esque move as he didn’t show a whole lot of remorse afterwards. At least he made the right call in the end, but it certainly took him long enough.

I suppose that the situation will always be tough for Superman after a while. Since he can hear everything across the world, there will literally always be someone who needs to be saved at some location. There will always be criminals and he really wouldn’t have any time for a secret identity. That part of the plot was also interesting since he didn’t have to bother with one in Russia. If he didn’t have to worry about being Clark Kent in the current comics, he could certainly save a whole lot more people. It would be at the expense of his daily life though and that could mentally burn him out a lot quicker than necessary. There is a big plot twist in the final page of the comic as well and it’s certainly a pretty cool one. I certainly like this time paradox and it adds another layer to Superman’s origin. It’s not one that actually matters, but it’s still cool all the same.

Lex Luthor was certainly a very good antagonist to have here. He’s not completely off the rails evil as per usual this time. He still wants to stop Superman at all costs and he is hired by the government to work officially which likely helps to temper him. If Superman had been on the US side…well we know how that turns out. It just ended up being convenient for Lex that Superman chose the wrong side. Lex’s intellect was certainly shown in its full force here as his elaborate plans were quite great. Of course, you can make the case that Superman’s intellect is roughly on par with how he did a lot of predicting of his own. The only facet of Lex’s character that wasn’t very good was his relationship with Lois. For some mild shock value, they were married in this comic and the pairing doesn’t really make any sense.

We are never given any reasons as to why Lois would go with him. He never has any time for her since he is obsessed with Superman and even randomly tries to divorce her at one point. I believe that they stick it out, but they’re essentially acquaintances by the end as opposed to a couple. Lane’s role is rather small beyond this so she didn’t get a chance to stand out. Batman gets a mild role here as well and he is a much more extreme “VIVA LA RESISTANCE!” vigilante than the Dark Knight that I am used too. It was a fun take on him I suppose even if I’m not sure why he changed so drastically here. Regardless, he did a good job of standing up to Superman and was a good mini boss although he didn’t get a whole lot of hype this time. He was a difficult antagonist to stop, but he doesn’t get too much screen-time. It was a fun little cameo in a way.

Wonder Woman and Green Lantern also appear at different points. GL’s appearance certainly wasn’t his greatest, but he seemed fairly decent. He just didn’t get a chance to do much and taking down Superman is a little above his pay grade. Wonder Woman looked good as she helped Superman out until he went over the deep end. With the friend zone intact, they made a good team. While Superman could have handled the situation a lot better, I don’t really get why she was so upset with him though. As far as I could tell, he did his best to make sure that her recovery was smooth and I don’t believe that he absolutely knew what effect the ordeal would have on her. Maybe he did though since he is a genius in which case I suppose she should be upset. She ultimately did decide to perform the deed though….lets not go in circles here.

Brainiac also shows up for a little while and he had a fun role. His final moments will be sure to please his fans since Brainiac would have not looked very good otherwise. He’s always been a solid villain even if he is less interesting than most of Superman’s other foes. The Man of Steel just has too many good villains to choose from at this point. There were some other side characters like the traitor, Pyotr, but they’re not all that important in the grand scheme of things.

I’d say that the first half of the comic is certainly better than the second. That’s probably because the concept is still very fresh and unique at the beginning and Superman still feels like himself through and through. That being said, it never jumps the fence and even though Superman may have not totally stayed in character, he didn’t go over the top for no good reason like in Gods and Monsters or even Justice League the animated series. Justice Lord Superman had been in character for a while, but deciding to destroy the Flash for kicks? That’s a “Jump the shark” moment for him. The ending of this comic has a lot of great moments to help keep it close to the first half.

The art was quite good in this comic. I liked Superman’s new design and the whole atmosphere is slightly darker, but not in a gritty sense. It’s more like a dark timeline where everything is a little sandy, but still light. Even when it’s day time, the comic makes it feel more like the afternoon. It does a good job of capturing the political element along with the action and solid dialogue. You can also see how Superman and the other characters age throughout the comic. Art plays a big role in any comic and it really helped this one live up to its potential.

Overall, Superman Red Son is definitely a very good Superman story. It’s certainly not his best as Superman Unchained still takes that title (as well as the title of best comic of all time) but it’s up there. I haven’t read a great deal of Superman comics to be honest so this is probably in my top 5 by default. I really need to check more of them out considering that he’s my favorite comic book character of all time. Of course, I have read quite a few JLA stories so I suppose that they count. I definitely recommend this comic. It has a good amount of action as well as political drama, which makes for a good mix.