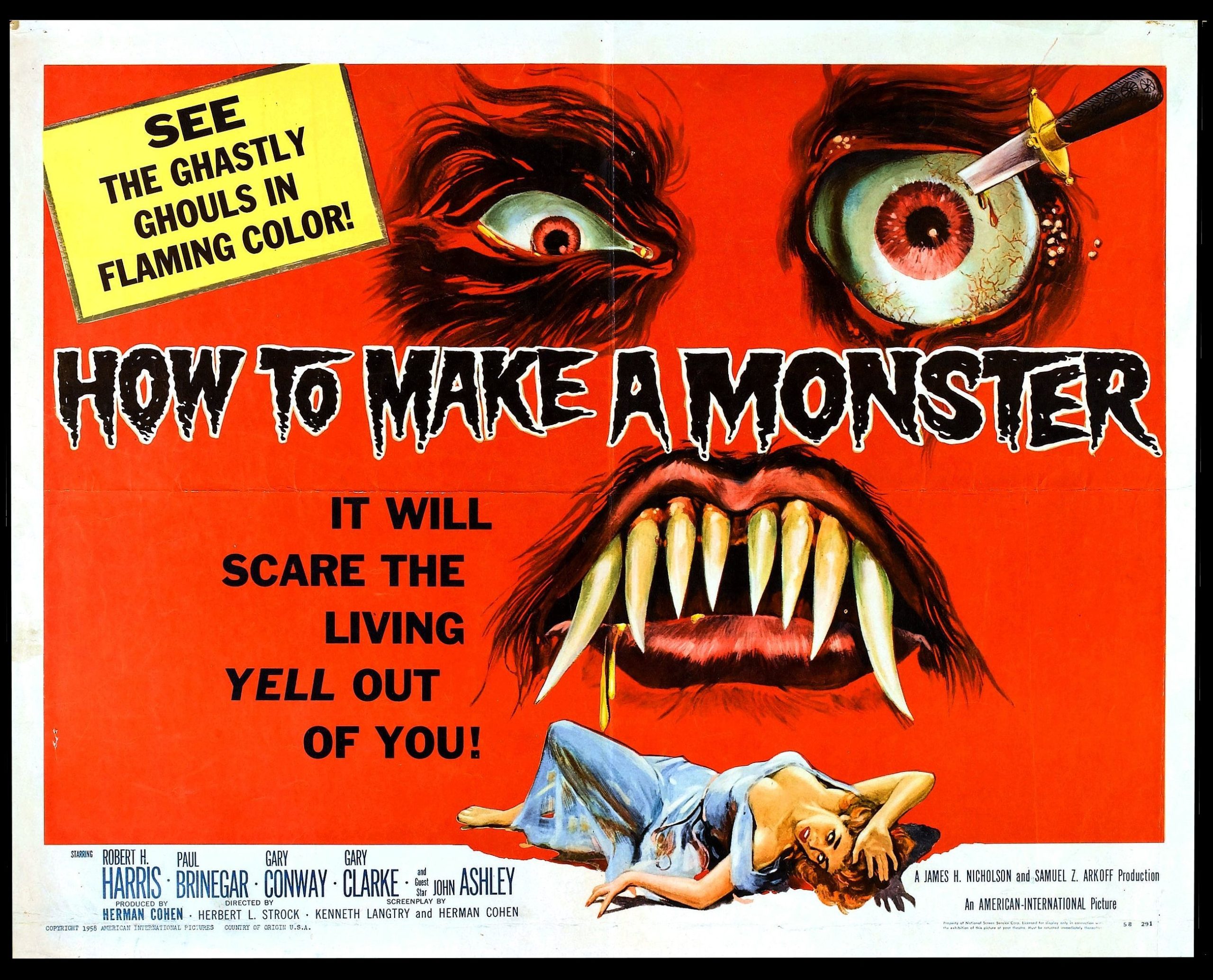 A movie about the villain being a guy who designs the monster suits is very original. I’ll give the film some points there and while it does go into the more classic creature feature kind of story beats, it’s still a different angle to it at least. I thought this was a rather solid film and of course we got to see corporate step in to try and take control. It’s an entertaining film from start to finish even if you have to suspend a lot of disbelief for how slow on the uptake all of the kids are.

The movie starts with Pete working on his horror effects as always. He’s really outdone himself this time as the Wolfman and Frankenstein look so real that everyone will be terrified. Pete knows that he’s done a great job and is rather proud of his work. Not many can say they’ve reached this level of talent. Well, his dreams of the future are ended abruptly as the company is bought by a new studio that doesn’t want to make horror movies anymore. They view horror films are old hits that won’t be popular anymore and tell Pete that this will be his last picture. Pete has no experience with anything else and so even when a bunch of people offer him some new gigs and ideas, Pete turns them all down. He wants to prove that his monsters can still be scary enough to be a success though. So Pete remembers that he has hypnosis powers and decides to turn his two latest stars, Larry and Tony, into malicious monsters that will murder all of the new executives. Can he pull this off?

It’s certainly an ambitious plan on his part and one that only works if he has absolute skill as a hypnotist. If he was just an ordinary makeup guy then he would have been doomed from the start. This way though he is even able to give the kids super strength by commanding it. He won’t stop until everyone’s dead! By the end it also seems like he wants to take their heads to put on his display case which was a really radical jump but I guess we already knew this villain was crazy so it shouldn’t be too surprising.

I don’t think the film intends for you to feel bad for Pete anyway which is good since he would make this very difficult otherwise. The guy resorts to murder almost immediately just because the execs don’t like monster movies. There’s no way you could make a guy like that very sympathetic. He slowly gets more and more unhinged as the film goes on. He’s certainly lost it by the end that’s for sure. He barely even tries to hide the fact that he’s the villain, Larry and Tony just aren’t very smart so they don’t notice.

Pete has an assistant in Rivero but he isn’t very smart either. He practically tells Pete that he will be betraying the guy soon. He says if the cops show up that it wasn’t Rivero who called them but the mind controlled teens. Sure……sure they are the ones who called the cops but Rivero will be out of state visiting family? Rivero must have known how this would play out but since he seems surprising, it makes him one of the biggest suckers in the film. Cmon now, you can’t try threatening the main villain like that or dropping any crazy hints. It is not a good idea.

As for the two teens, well they don’t have a whole lot of character. When they aren’t being mind controlled they are wondering what’s going on and talk to each other about how this might be a trap. Near the end of the film they even try leaving but the door’s locked. Rather than panic or try to bust through, they ask the main villain why he locked the door. Yeah…I wonder why. These kids are really not too bright and they were very nearly destroyed here. They barely even felt like people at times and were just plot objects to do Pete’s bidding. I would have liked to have seen some intelligence and critical thinking from these guys instead. That could have taken them far.

There was one random character I enjoyed a lot though as a mysterious third party. His name was Monahan and he’s a guy who thinks of himself as a detective. To his credit, he did a lot of ground work and even figured out that Pete was a likely suspect. His main mistake was in telling that to Pete though. Don’t tell your suspects that they are a suspect until you’ve reported this to the cops. Otherwise it kind of defeats the purpose and puts yourself at risk. So Monahan may have made a rather obvious mistake there but I did like how confident he was. At the very least you won’t be forgetting this guy anytime soon. I thought he was even more entertaining than the two corporate execs.

Those guys were fun too though. They were definitely not the nicest guys around but at least they were trying to give Pete a severance package. The corporate takeover could have honestly been a lot worse. Ultimately they are here to get the job done though and so they can’t just back off too quickly. They’re here to end the monster films and that’s final. The characters just have to learn to respect that and most did….just not good ole Pete.

Overall, This movie is over in the blink of an eye but it succeeds at what it is trying to do. The Creature Feature setup works well and I liked the whole designing aspect. It helps give Pete a little more control over the monsters than usual and you can’t go wrong with hypnosis. I may scoff every time it appears but at least it explains why these teens were crushing everybody. Otherwise I feel like they should be getting dominated by the execs and corporate. Those guys aren’t going to lose to a bunch of kids. The ending wraps things up nicely and so if you want to watch an old creature feature, this is a good one to check out. The writing is good and the film’s just fun. It’s got a lot of energy to it all the time and I enjoyed all of the characters. The heroes and villains were all properly developed. Some may not be very smart at all…but that’s also why the guy is stuck in a dead end assistant job for this many years under the creature designer. We even get some fun exchanges between the cops and the villains when they are brought in for questioning. It should remind you of Detective Conan with how Pete feigns a ton of outrage at how the heroes would dare suspect him. Works every time.