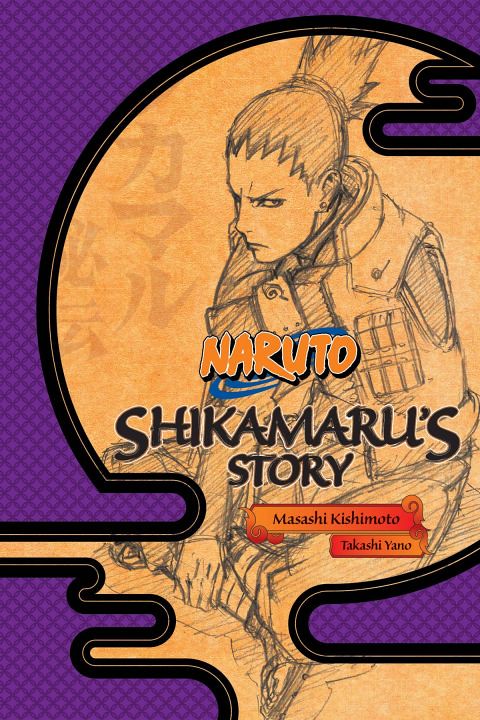 It’s time for the second Naruto novel! Shikamaru is definitely quite the improvement over the Kakashi one. Unfortunately, Shikamaru himself comes across as rather petty and completely unlikable, but sometimes side characters shine best when they’re on the side. It’s possible that looking at the world through his perspective just makes him appear to be a bad character. Regardless, this novel didn’t need Shikamaru to succeed so he doesn’t ruin the experience. Of course, this is why I want Naruto to be the main character for a novel at some point. I think you would be able to see a noticeable improvement if that happened.

Shikamaru was trying to enjoy a normal day for a change when he sees one of Sai’s birds approach the village. In it, a message states that he has lost sight of his own identity and the rebellion in the Land of Silence is growing worse. If nothing is done soon, Sai writes that this could become a very large problem. Kakashi is tempted to go himself (Or just posturing) but Shikamaru decides to volunteer. He figures that this is the best way to secure a bright future for Konoha and especially since some of the other Shinobi like Naruto would be averse to outright assassination. Shikamaru’s not as heroic, likable, cool, or as good as Naruto so he figures that he’ll take the job. He never had a problem with murder after all. Kakashi assigns 2 Anbu Black OPs, Ro and Soku, to accompany him. Together, the three of them set off into the Land of Silence and prepare themselves for what is to come….or not.

Unfortunately, Shikamaru seems to have lost most of his intelligence during the years of peace. They know that the leader of the rebellion is incredibly charismatic and that Shinobi have been deserting from every one of the great ninja villages. Even Sai has been turned to the other side. Does Shikamaru suspect even for an instance that mind control or genjutsu is involved? Nope, he just walks into a villain meeting with no concrete plan around that and listens to the guy’s speech. He begins to feel its effects, but decides to ignore this and lets the guy keep talking. Eventually, the leader calls him out so Shikamaru attacks, but by then the genjutsu has been way too strong.

Shikamaru really left his team out to dry with that kind of plan. Of course, as “experts” the two Anbu Black Ops should have been able to resist this technique as well. Shikamaru also came across as petty when he continued to refer to Soku by her real name even when she made it clear several times not to call her that. They are on a mission after all and Black Ops must keep their identities a secret to that nobody can find out who they are. Moreover, she just doesn’t want to be called by her real name, is that a problem? Apparently it is since Shikamaru intentionally uses her real name at every opportunity to annoy her. It’s just very self centered of Shikamaru.

Finally, I also didn’t like Shikamaru because he’s way too full of himself. He spends a few pages insulting Naruto, Sasuke, and Kakashi and questions why they should be regarded as heroes. He acts as if they don’t deserve this title despite saving the world. Where was Shikamaru during the climax? As far as I can recall, he was hiding with the other ninja and talking a good game while doing nothing. He really has no room to talk and Naruto really shouldn’t even have him as an adviser. He seems like the kind of guy who will give you the wrong advice each and every time. Plus, he hints that he would keep things from Naruto to shield him from the darkness, but that also means that he’d probably keep on doing assassinations and such. Part of why the Third Hokage’s rule wasn’t so good was because Danzo and the Anbu elites rose up in the background as well. Having two factions will simply fracture the village as a whole. Well, regardless of all those technical elements, Shikamaru just wasn’t cool here.

Ro and Soku don’t get a whole lot of character since they’re only around for a little while (The book is fairly short after all and the team doesn’t get to the villain base until around 1/3 of the way in. Book pacing has always seemed rather intriguing that way. It always feels like the prologue takes a really long amount of time, but I suppose that there is still time for a lot to happen since each page has so much dialogue in it) Ro likes to make puns with words and mixes his old way of talking with modern day slang. He’s not much of a fighter, but he can alter how a person’s chakra looks. That sounds like it would only be helpful once in a while to be honest. Soku is really snappy and aggressive. I don’t blame her for constantly threatening Shikamaru though. Her chakra needles definitely seem like a handy ability to have, but one that wouldn’t help quite as much in a direct fight since they seem to rely a lot on the element of surprise. Physically she is definitely a capable ninja though as she speedblitzes..you guessed it, Shikamaru, towards the beginning of the book.

While Shikamaru’s team may have ultimately failed 100%, (They were turned into traitors as well) it’s good that Temari and Naruto aren’t quite as weak willed. With Gaara and a lot of other ninja around as well, the whole uprising was over in an instant. In the end, the villain wasn’t much of a fighter either. He was able to hold Shikamaru off, but that’s not saying much and together with the two Anbu Black Ops for a fair 3 V 1 fight, Shikamaru’s team managed to pull in a win.

I was definitely glad at the ending of the book though. Ultimately, the heroes spared the leader of the uprising and imprisoned him. There was certainly never a need for an assassination and while the heroes didn’t want another war, I think they severely overestimated the Land of Silence. Naruto himself could have easily walked in and ended the whole situation with minimal casualties. So, the plot in and of itself was a bit of a stretch there.

Overall, This novel was fun. It’s just too bad that Shikamaru was such a bad character. I felt bad for his partners since they got beat up quite a bit as a result. Naruto and the others should probably start to doubt his leadership skills right now. The only part where the novel gets a little dark is when the two Anbu members are kidnapped. Besides that, it felt like your standard Naruto adventure and had a good blend of sneaking around and action scenes. Now we are approaching the final Naruto novel for now. Let’s see if the Sakura volume can continue the novel’s acceleration through the rankings or if it’ll take a step back. One thing’s for sure, Sakura should be more likable than Shikamaru. (Although she was annoying in this book and ended up being wrong in the end)

Ace (One Piece) has some pretty intense fire powers! Temari’s wind lets her blow away fire, but it has its limits and Ace will prove too be too powerful. Ace also has a lot of physical power and his speed shouldn’t be underestimated. Temari has lost this round, but she may be back someday. Ace (One Piece) wins.

Sasuke Uchiha is a unbeatable character. He has Fire Jutsu that can’t be defeated. Temari challenged him once, but couldn’t handle the power. Sasuke is just far too powerful. Temari takes her first loss, but she’ll be back one of these days. Sasuke gets yet another win, but that was never in doubt. Sasuke wins.

Tenten has a lot of shruiken and knows how to make them dangerous weapons. Of course in this match they’re a moot point since Temari could blow them all away effortlessly. This is Temari’s debut fight and she starts off with a solid win. Of course nobody stays undefeated for long. Temari wins.