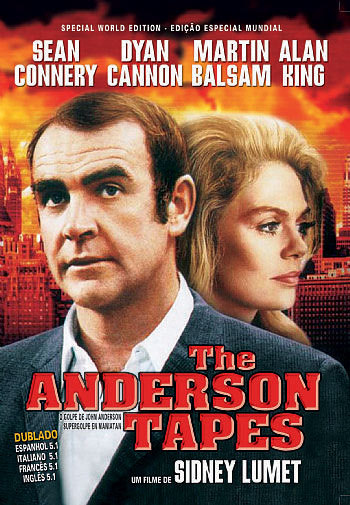 It’s time to look at the Anderson Tapes conspiracy film. Will this one fare any better than the last one? Not really I’m afraid. It makes quite a lot of mistakes as the film goes on and by the end you wonder if the film even knew what it was doing. After all, you’d almost think it was promoting the view of everyone being watched as a good thing even though you would assume the opposite from the film’s premise. It’s just a very confused movie.

The film follows an ex con named Anderson. From the start you will wonder if he is really reformed or not as he isn’t exactly a pleasant guy and seems to be carrying around some grudges. Still, the film could just be trying to make him a very ambiguous character where you don’t know what his goals are…nah. Turns out that the guy still is a crook and he decides to get all the local thieves together for one more crime to make them all rich. We may need some extra surveillance to stop him.

You probably see what the problem here is and that it gives the surveillance people a leg to stand on. They thought this guy was suspicious and were watching him and it turns out that they were completely right. They didn’t actually help out at all so the whole thing is moot but it’s something to think about. Of course, it’s the principle of the matter that many will not agree with and one film’s positive portrayal of it shouldn’t really have any kind of impact on anyone who is watching. It’s one of those things that you know is going on and you pick a side but at the end of the day at least it’s good that you are aware of it. The government’s already got most of your information along with many large corporations so the best you can do is roll with it. The ironic part is that most of this stuff can’t really be used in court anyway so don’t expect it to prove your innocence even if it can do the opposite.

Naturally the film goes for the low hanging fruit by having the villains spy on the character during romance moments to give him some extra humiliation. Given that Anderson has been gone for 10 years he certainly didn’t waste any time. It’s a pretty painful scene to watch and I would basically have to call it a rebound since the girl dumps the other guy over the phone. The romance here (if you can even call it that) is pretty brutal. It doesn’t help this film’s case at any rate.

One thing the film handles reasonably well is the heist I guess. I like how confident everyone was during that scene as they really didn’t even seem to care that they were being robbed. They just took it in stride and were confident that their safe could not be cracked. The main characters are basically amateurs anyway so it’s not as if there was much to fear in the first place. The main characters even let the kid get to his walkie talkie to alert the proper authorities.

There are definitely quite a few comedy moments like that sprinkled into the film but they are spread too far apart. It was nice to see one of the crooks try to drive away so quickly that he crashed. The scene may have been unintentionally funny but sometimes that is why it works. While some of the humor lands it isn’t enough to distract you from the dreadfully boring story and poor writing. It just won’t be able to keep your interest for very long and you’ll quickly start wondering why the film is just so unfocused. It really didn’t play out anything like I thought it would and unfortunately this isn’t a good thing. It should have been a straight up conspiracy story where the main character tries to find out why everyone is spying on him.

Instead this is surprisingly not much of an issue. Once he finds out that someone is spying on him he just locks the door in the guy which doesn’t actually help matters at all. He then forgets about this for the rest of the film or just chooses not to think about it. Either way the whole plan was already compromised at this point. You also have to wonder why everyone was still in place after 10 years. You can’t stress this point enough. Anderson was locked up for a full decade but then he walks out and acts like he still owns the crime syndicate. His usual informants are still in the game and he is the head honcho. The way I see it, if Anderson was caught and locked up, that would have been reason enough for one of the underlings to decide to take him down and become the new king. I wouldn’t have minded some internal conflict among the gang members as it would have at least been a little exciting.

It’s rare that I ever say this, but maybe the whole film should have taken place at the prison. At the very least that place seemed like a more interesting backdrop than what we got. Some of the dialogue there was rather sketchy so maybe the film would have just gotten even worse, but at the very least I didn’t mind the Doctor. He seemed all right and talked tough to Anderson even if he lost the verbal battle. His bluff was called, but I applaud the guy for giving it a try. Once Anderson left the prison the film still stayed strong for a little longer as the three ex cons went to an airport to hang out. Once they split up, the film split along with them.

Overall, The Anderson Tapes was definitely another flop. The plot isn’t very interesting at all and the characters aren’t any good. The spying aspect of the film doesn’t actually go anywhere and the heist is a pale imitation of a real one. Pretty much every other heist film I have ever seen has managed to pull it off in a more effective fashion. There is really no reason to actually watch this film so I’d recommend leaving it where you found the movie. If you want a film that will make you think more then you should watch Resurrection F. At the very least that film will give you a lot of power level questions to think about.