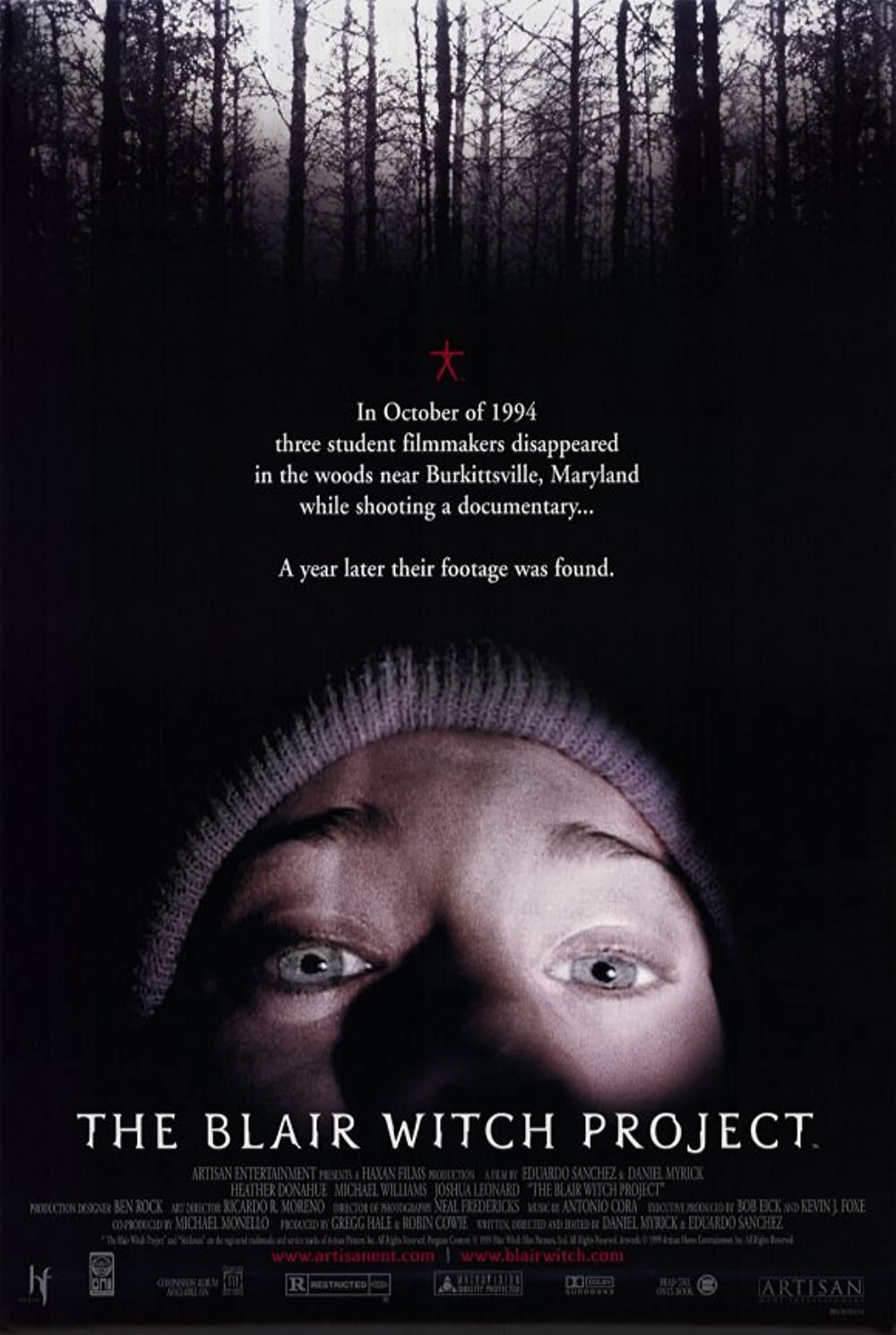 The Blair Witch Project is definitely a very well known movie. Just about anyone who is familiar with the horror genre will likely have heard of this film at some point or another. It really got the whole found footage genre on the map in the first place. That said, it also plays out how you would expect with every single character being super unlikable and obnoxious the whole time. They crack under pressure almost instantly here.

There are only 3 important characters in the entire film so that makes them all the more crucial to the film being good. Basically Heather wants to investigate this mysterious Blair Witch and so her two friends Mike and Josh agree to go with her into the woods. It’s supposed to be a relatively small area so at least they won’t get lost right? Well, after a day of hiking they try to make their way back but can’t seem to leave the forest. They keep finding themselves back at the start only there is some scary imagery awaiting them each time. At night they hear sounds as if there are people running around. Have they already entered the Witch’s labyrinth?

From the start I don’t think it was a great plan to look into the whole Blair Witch angle. I mean, put it this way, what can they possibly learn about the witch? There’s the old crime that some townspeople mentioned where a guy kidnapped a bunch of kids and murdered them all. It seems like that may have somehow turned into the witch legend but even then, what are you going to find in the forest? Realistically you’re either going to find nothing or you’re going to find a supernatural entity and will be destroyed. In no scenario will this go favorably for you.

Back to the journey though, this reminds you why you have to be very careful when choosing your travelling companions. It’s one thing to have friends that you’re cool with during the day but how will they handle high pressure situations? Not very well in this case although all 3 characters are really at fault here.

First up you have Heather who insists on holding her camera at all times no matter how much the others beg her not too. It’s clear that this is just distressing them more and more but she will not put it down. Mike at least even asks not to be filmed on many occasions but she flat out ignores him and continues to do it anyway. That’s not good for keeping everyone agreeable with each other. Throw in the constant panicking and I definitely didn’t like her as the main character.

Not to say that the others were much better at all though. You have Mike who starts to crack before Josh. He is really stressed out about going home and is determined for Heather to admit that they’re completely lost. He’s really obsessed about this point which isn’t going to help their cause. Yeah Heather should have admitted that she was winging it the whole time but forcing her to admit that shouldn’t be at the top of their priorities. Then at the end you have Mike running off on his own a lot which puts them in a bad spot. You have to stick together at that point.

Then you have Josh who really can’t help but panic at all times. He starts singing nonsense, running out of the tent, etc. He puts them in a lot of the danger here. While I said that Heather should put the camera down, it’s still no excuse for Josh to be completely cracking the way that he is. He really needed to keep his head. This trio was really just bad at survival and I wouldn’t be surprised if they really were just running in circles the whole time.

If anything it would have been better if we stuck to the townsfolk interviews as the main plot. Those guys all seemed a bit crazy but at least they were more sensible than these three teenagers. Now I know you got to have a lot of panicking and such for drama but imagine three adults thrown into this situation instead. No panicking, none of that. Just a few rational people trying to figure out what needs to happen next. I think the “Blair Witch” would have a much more difficult time in this case.

I’ve never been a fan of the shaky camera direction in a film and this is no exception. Traditional camerawork will just always be superior to me. I want to see what is happening at all times and be able to see what’s going on. With this setup you have to hope that the characters can aim straight and with how they’re being terrorized by the witch the whole time and their own fears…well that’s a tall order. That means you miss out on a whole lot of the action which is no good.

Overall, The Blair Witch Project ends about how you would expect it too. It’s a very by the books kind of movie and I suppose at the time it was original but it feels like every found footage movie goes in the same way. What’s my interpretation of the ending? Josh took them down real quick. I’m less inclined to believe the supernatural elements this time just because there’s too much room for doubt. Usually in these things it’s clear that the witch is real but each of the supernatural elements is something that one of the gang could have done. My primary suspect is Josh and the rest was just paranoia on the part of the heroes. It’s fairly tame for a horror and so it’s not a tough watch but the characters are just soooooooooo annoying. That’s what is really going to hold this movie back for me. I just can’t picture watching the movie again.