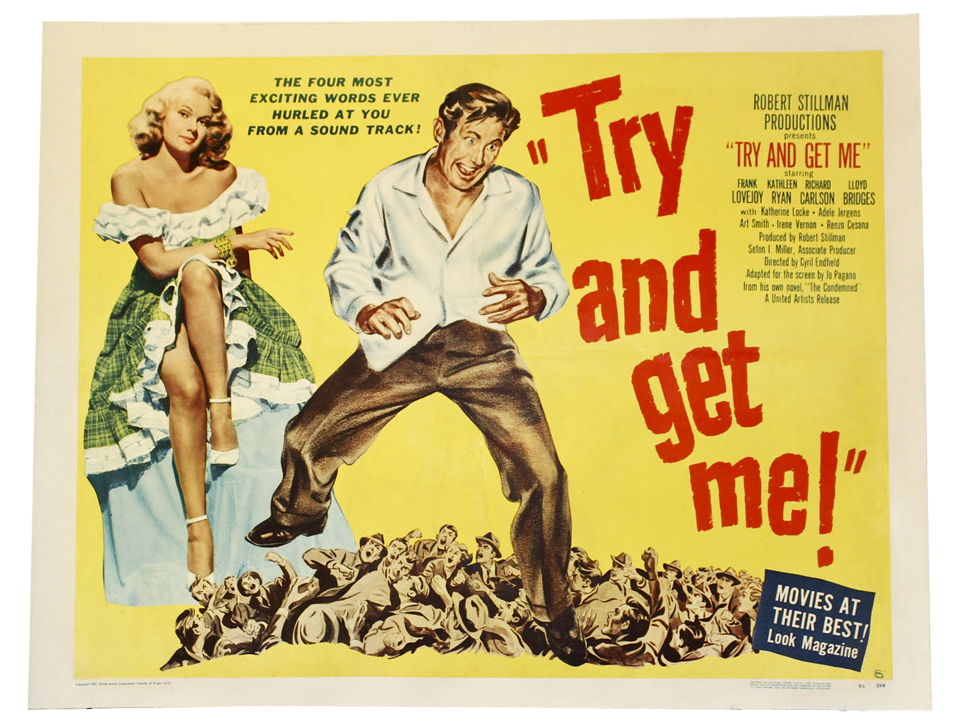 It’s time for an old noir film that serves as a cautionary tale for why you don’t want to mix with the wrong crowd. Once you start committing crimes it is very hard to get out of them. A lot of people like to think that they can get out as soon as they want to, but it’s easier said than done. It’s a pretty good film that definitely has a bit of a dark ending. It’s all handled pretty well and the film even has more acts than I expected. It manages the pacing and run time very well.

Howard is pretty low on money and has a hard time landing a job. There just aren’t many openings right now and he gave his last coin to his kid so he wouldn’t feel left out when everyone else went out to the local game. Howard ends up meeting an eccentric man named Jerry who offers him a job. Howard finds out that it is for an illegal operation so he half heartedly says no but after double thinking it, Howard agrees to help. He is the getaway driver for Jerry’s various crimes. Things heat up one day when Jerry murders someone. Now Howard is really on the hot seat and reporter Gil is determined to nail him.

The film really has two main plots here. First up is Howard’s plot with Jerry as they go around robbing people. Then you’ve got the secondary plot with Gil where he doesn’t take the crimes seriously at first. Eventually he figures out that this is the real deal and decides to run some hard hitting pieces meant to ruin Howard’s life. Gil has no sympathy for murderers and the town is in full agreement on this. The mayor warns Gil that he is riling up the people a little too much but the reporter doesn’t see any harm in this.

Howard is a character that is hard to sympathize with because he had a few easy outs. When he initially says no Jerry starts to get sarcastic and even tosses Howard a 10 dollar bill. Howard should have taken it and left. Instead he decided to stay and get rich in part because he saw what a life Jerry led. That was Howard’s big mistake. Then there’s also the brief affair with one of Jerry’s friends. Jerry had them go on a double date to fool the authorities and while Howard initially just went along with the ruse he ended up getting drunk and making a fool of himself. There’s just no real sympathy to be had for Howard by the end. He was really annoying and talked a good game, but always backed off when the chips were down. He’s not the kind of guy that you want to have in your corner because you won’t have him there for long. He’ll be gone by the next time you turn around.

Then you have Jerry who is the main villain of the film. He’s definitely used to this kind of life and has been a criminal for a long time. You’re not even supposed to feel any sympathy for him. I wouldn’t be surprised if he has murdered a lot of other people over the years since I doubt his crimes always go well. He’s likely slipped up before and every time he slips up someone ultimately pays the price. He does a better job of handling the prison riot at the end though as he at least tries to put up a brief fight. Realistically you aren’t going to be able to do anything when attacked by a whole mob though. The only outcome there is death.

Finally we have Gil. His sub plot appears a bit at the beginning but doesn’t really appear again until the end when Howard is already captured. I was impressed at how the film maintained the two plots. The moral for his plot was a bit mixed though. Basically the film tried saying that her should have held back in his reportings and then the mob wouldn’t have murdered the two murderers. Sure, he wrote his pieces pretty hard but it’s not like he lied about any of it. Not everyone can handle listening to the news on a daily basis because of how graphic and intense it can be at times. It’s just how it is.

Gil’s doing his job in reporting and I think the characters were rather hard on him for that. If anything based on how unhinged the mob was it may have happened anyway. The guy Jerry murdered to which Howard was an accomplice on was clearly a very liked and respected figure. It’s not a crime that people would have a lot of sympathy on. It’s similar to how based on what kind of crime you land in jail for odds are that you wouldn’t survive back in the day. People would make sure you didn’t return. The law system can also seem a bit iffy at times with how sentences are dealt out. One of Gil’s papers was warning people that Howard may plead temporary insanity and then he’d be let go without a jail sentence. It’s something that people actually do try. Then you have others who are in jail for murder and when released they go right back to it.

The law’s not perfect, but nobody should be skipping due process to play vigilante. That being said, I just didn’t really see a problem with what Gil was saying. He didn’t beat around the bushes with his takes but he wasn’t using hyperbole or being too over the top either. It is what it is I suppose. Once the mob lined up there really wasn’t anything the cops could do. It would definitely be a scary situation to be in though for all parties involved. You’re effectively locked in with a few hundred crazy people and no escape. Even if you aren’t their target you have to be careful that you aren’t attacked in the mix up.

Overall, Try and Get Me is a pretty solid film. It can be rather tense at times and quite a lot of things happen during the film’s length of time. If you’re up for a good suspense film then this is a nice one to check out. We’ll see what you think on the matter with Gil. The ending is definitely intense and ends on a pretty somber note. The writing is solid and I don’t really have any negatives to report here. It’s just a pretty good movie that has mostly flown under the radar over time.