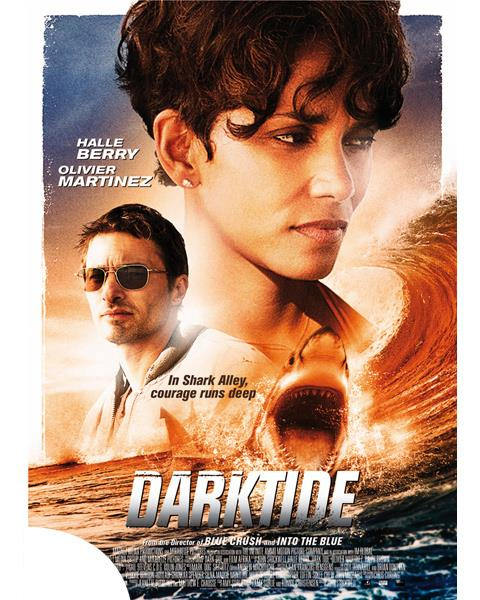 It’s time to look at a fairly recent Shark film. At the very least this film isn’t quite 10 years old yet. Unfortunately it has not aged well though as the very premise hinges around the fact that all of the characters are pretty unlikable. They all fight to be the worst character in the film and continually put themselves in a position where you are rooting for the sharks to win. The very premise of the film doesn’t help its case.

So, Kate and Jeff have decided to make a movie. Their film will be breath taking in how realistic it will be as they are actually going to make physical contact with the sharks. You may wonder how this could possibly go wrong, but they don’t and naturally one of their friends gets eaten alive. Kate retires from the film business since this all went so tragically wrong, but Jeff pulls her in once more. This time they are bringing a rich guy and his son along for the ride. Can Kate protect them or will the sharks claim another victim?

It’s hard to even know where to start here, but I think the premise is as good a place as any. My issue with it is that the humans want to make a film about the sharks so they decide to quickly invade their turf. That’s already not cool since they aren’t even trying to make the world a better place. They’re seriously just disturbing the sharks to make a quick profit so you’d think that these guys would be portrayed as the antagonists not the protagonists. It seems like an odd move. This is my complaint for many animal based plots like this one. At the end of the day it seems like the humans just want to be able to flex and reaffirm their position at the top of the food chain by pulling off stunts like this. It always makes me root for the animals here and eliminates any chance these characters had of being likable.

The dialogue already made that quite easy though. The opening scene with the characters is particularly brutal. Jeff is trying to film his movie but Kate keeps joking around and not taking anything seriously. They have to stop filming multiple times and none of the joking and playing around moments were humorous either. They all just seem to be very unlikable characters. That’s before the rich guy even shows up. Now, this is another dropped opportunity for the film as it could have tried to go for something interesting here or at least anything better than what we got. The point of the Dad is that he’s a very selfish guy who is a terrible person. At the same time the film lightly drops a bunch of hints that he has tried to connect with his son, the attempts have just been really misguided. So, is he genuinely trying to be good or is he really just consumed with money and it’s a convenient excuse? I choose the latter even if the film was maybe going for the former.

He just didn’t make any real effort and getting his son to go underwater with a bunch of sharks isn’t the way to connect with him. If he was trying to be a fun guy then it failed and no last minute heroic scenes can really do anything to try and stop that. The son wasn’t a particularly likable character either though as he constantly looked at the negative side of things and really made it clear that he didn’t want to be on the ship. Hey, I wouldn’t have wanted to be on either to be honest, but he could have put up a slightly better act. Their whole dynamic was just no good.

The same can unfortunately be said for Kate and Jeff. They are technically still married but after the first death on the ship they went their separate ways. Well, Jeff is low on money so he heads back to Kate to get her to go underwater again for money. She’s not thrilled about this of course, but goes along with the plan anyway. Naturally the two of them have a ton of arguments about everything in the meantime but still make room for flirting and such as well. The romance is absurdly terrible here by the way. Kate should never have even entertained the offer of going back into the water. Her business wasn’t doing too well that’s true, but getting back in the ocean isn’t the way to go. It’s just too dangerous. There isn’t much to be said about the rest of the crew as they’re just here to joke around and get in the way as well. Some of the accents did make it hard to hear the characters at times but I won’t blame that on the script, it just is what it is. The script was still terrible though.

As can be expected the underwater scenes were pretty painful as well. It’s super dark since filming underwater is pretty tough and it’s just dreadfully boring. It’s why I encourage all films to stick away from underwater scenes as it is very rarely worth the risk. For every film that does it well you probably have 100 that can’t pull it off. It’s one of the few things that you are usually just better off green screening entirely so you can at least make a fake ocean that is bright enough to see in. Since a large chunk of the film is underwater, that didn’t do it any favors.

Meanwhile the soundtrack was also not very good. The film did take itself pretty seriously at times with some very dramatic tunes, but I can’t say that they fit the scene all that well. Then we got silent scenes as well which meant that the budget ran out. I wouldn’t give the soundtrack a negative score though as it’s probably still a little more memorable than I would have figured it to be. Not really enough to help the film get back on its feet though.

Overall, This film wasn’t terrible. As far as shark films go it could have certainly been a lot worse. At the same time, the humans just need to leave these animals alone. Whenever they try something crazy like this it puts the film in a bit of a bind since it’s hard to redeem the characters. At no point in this film did I feel any kind of sympathy for the humans. They knew the risks and went in anyway so when they were eaten it’s hard to feel bad for them. At most you’ll feel bad for the first guy who died, but he should have stuck with his gut instinct not to go back into the water. That would have been his best option. If you want a shark film with a surprising lack of action then check this film out. If you want a Shark film that contains the shark quite a lot then you should probably watch Deep Blue Sea. If you want a quality film without sharks, check out the legendary Godzilla film which does have some water moments.