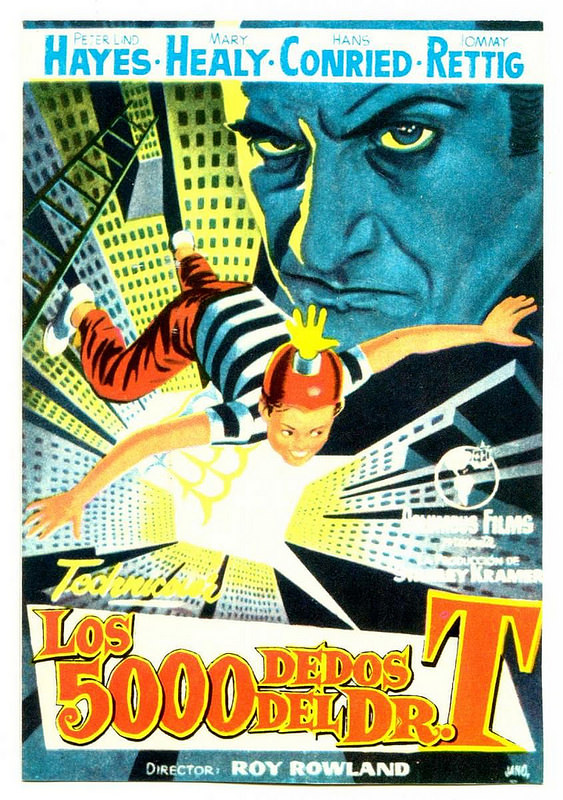 It’s time to look at an old school musical from Dr. Seuss. This film is definitely very strange and outlandish as you would expect from the famous writer. As always he does a good job of making a world so utterly bonkers yet with some sort of rhyme and reason behind it. It’s a fairly fun film with a lot of ideas, but one that does drag on a little more than it should have. Trim the length a bit and you would have a real winner here. Alas, the score does take a minor hit as a result, but this is still a film that I could easily recommend.

The film starts off with Bart having a dream where a bunch of people are running around. They have so many chances to catch Bart that you start to wonder if he’s misread the situation. Nonetheless, Bart continues to run and tumble until he is shaken awake by the best character in the film, Terwilliker. Terwilliker reminds Bart that he has to become a famous pianist and quickly. Bart tries to deflect the issue by learning a different instrument but Terwilliker reminds him that the Piano is the only good one. After he leaves Heloise, Bart’s mother reminds the kid that he should try harder. Bart’s response is to fall back asleep which triggers the dream that takes up the rest of the movie. If you were engaged with the real world plot, then you’ll be disappointed to know that it doesn’t show up again until the final minutes.

In the dream world Bart has been taken prisoner by Terwilliker who now rules the world. The villain intends to use the world’s greatest piano to get rich and famous. He has also mind controlled Bart’s mother with his telepathic abilities. Bart decides to put an end to this so he runs over to the local plumber, August. August is skeptical about the whole thing since the villain bought him some pickle wine. Can Bart convince this guy in time to save his mother? They’ll have to get past Terwilliker’s incredibly powerful army of villains so this will be no easy feat by any stretch of the imagination.

As expected I wasn’t a big fan of Bart. I won’t say that he is a bad character or anything, but at the end of the day he is just a kid so there is only so much that he can do. He tends to get shocked at just about everything and doesn’t react all that well. He could have been a lot worse I suppose, but he can’t hold his own movie. Unfortunately his mother doesn’t look much better as she spends the bulk of the film being mind controlled. Her willpower just wasn’t enough to block the villain’s influence and she never has a big moment where she overcomes this madness. Looks like it’s up to the main villain and August to hold this film up.

Terwilliker was a fun villain because for the most part he was rather reasonable. Not the marriage plot which was out of nowhere, but just wanting everyone to appreciate the Piano. While the Piano may not be the best instrument, I would argue that it may be the most effective if you could only choose one. The Piano has a wide range of sounds so it can be used for all kinds of music while others may have a little trouble there. Terwilliker isn’t afraid of getting into fights and holds his own rather well so he’s also not the kind of guy to hide behind his lackeys. I do wish we got to see him more in the real world though since he was definitely on point there.

Finally we have August who is skeptical of everything. He’s always lived his life with his nose to the grindstone so he doesn’t believe that kids are being kept captive at his workplace. He thinks this is all on the up and up, plus he’s getting overtime. Still, when he is convinced to check out the situation he goes in fists swinging. As soon as he enters the lair, Terwilliker tries hitting him with an energy blast that August quickly recovers from. I liked his fast reaction times there as other characters may have panicked or just wasted time asking questions like “What’s going on!?” August may have been suckered after that, but his response was good.

The writing is pretty solid for the film. As mentioned, I also did like the action scene where both fighters were using The Force even if it was a little long. Where the film suffers a bit is with how passive the heroes are. When the villain arrests them they don’t put up a struggle or even try to resist. August just blames Bart again while the kid just takes it. Fortunately they came up with an invention to stop the villain, but even then Bart has to rub it in the guy’s face. Couldn’t he just take the high road and claim the win? Well, I suppose he paid a price for this by the end.

As I mentioned, the film is super zany so while that is mostly a strength it doesn’t always work. I do appreciate the attempt though and it’s one of the better handled films with this level of abstract concepts. I liked the caps that everyone had to wear, those were pretty fun. It’s a shame that Terwilliker was on the wrong side since he had good design choices. You’ll have to suspend your disbelief quite a lot the whole time, but since it’s all a dream you can cut it a little more slack since the kid just imagines the scenario that’s most convenient for him. If it was all real then that would be a bit more of an issue.

Overall, This was a reasonable film. If you’ve wanted to see a film that was just absolutely crazy then this is the one for you. It is rather cheesy at times, but you probably won’t cringe except for possibly the invisible fishing scene. The over the top acting from all of the characters is probably part of its charm. Nobody involved in this film is actually taking it seriously. They’re just having fun and you will aim to do the same. It’s not the kind of film you’ll likely care to re watch but on your first time it’s definitely quite the trip. Just remember to use your imagination for all of the invisible scenes.