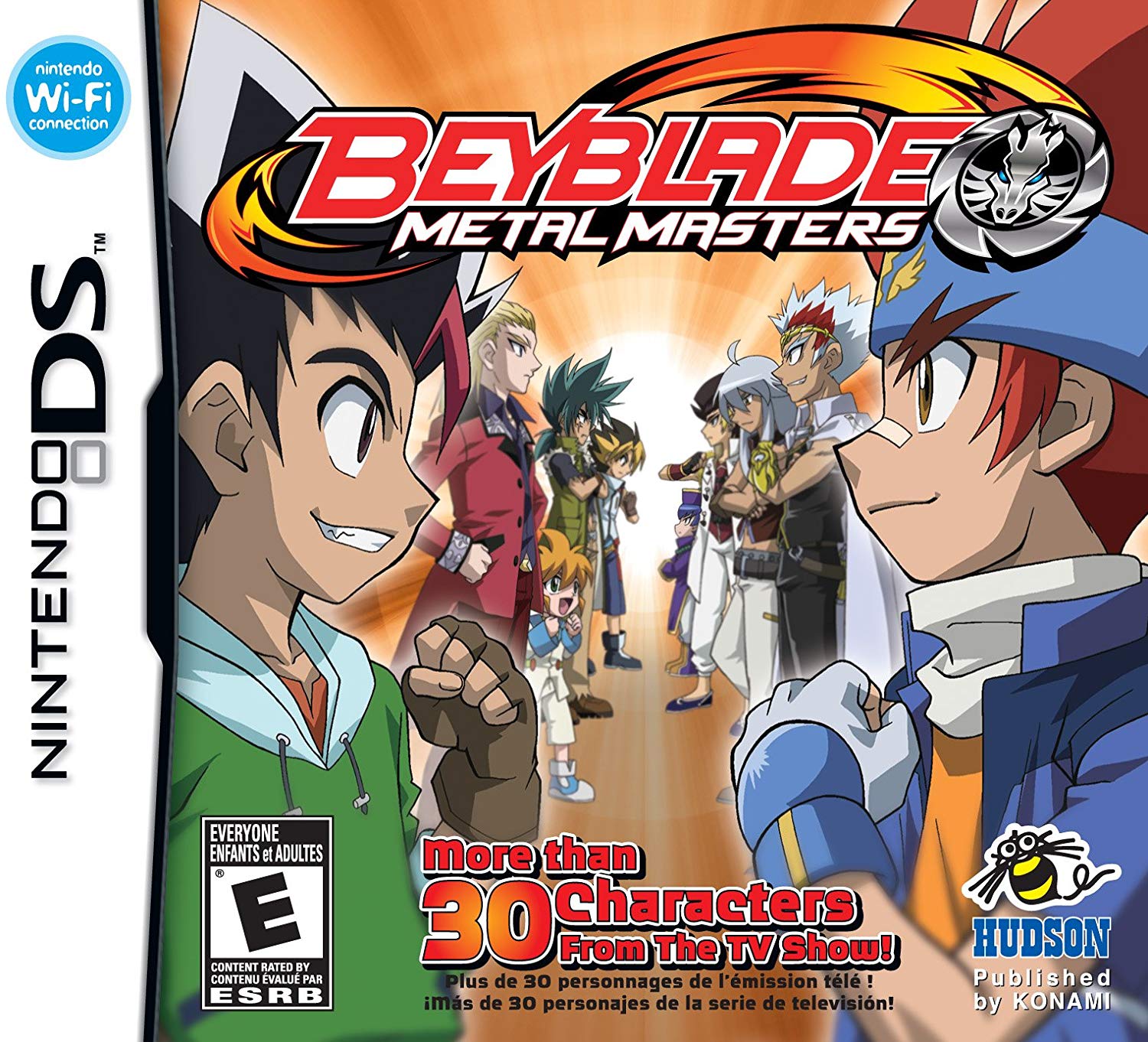 It’s time to take a look at a Beyblade game that I’ve owned for a very long time. I had been waiting until I had Metal Fusion and now that I beat that one it was time to look at the other big Metal game. This one is a huge improvement over the other title. For starters the controls have been fixed and there isn’t a pesky leveling up system this time around. It’s an arcade mode type game so it only takes around 20 minutes to beat a story but there are a lot of different characters to help with the replay value.

The basic plot is that the main character has been offered an invite to the latest big Beyblade tournament. He decides to enter of course, but it turns out that there may be more to this tournament than it would seem at first glance. Yes, this is the plot of every Beyblade game but in its defense it’s a plot that is always quite solid. Who wouldn’t want a tournament? The fun part about the concept is that it’s a good excuse to get all of the big characters in the series to meet up once again. There are around 5-7 rounds int he tournament and then you’ll have completed the Arcade route.

This game is fairly easy unlike the last one. The goal is to knock your opponent out of the ring or smash him to bits. Gone are the days of using the stylus and the game even gives you a pop up at the beginning letting you know that the stylus will not be used at all. It was probably the best message I’ve ever seen in a game like this. I was pretty stoked right off the bat. So you use the D pad to move your Beyblade. Press the A button twice to use your standard dash attack. B is to jump, Y to shield, and X to use your super attacks. I couldn’t find out how to use the final smash but you won’t need it. My advice is to spam the dash attack. It does a lot of damage and also has a chance to push the other Beyblade out of bounds which results in an auto win. You just can’t top that.

The game does force you to think about things a little more towards the end though. One enemy has a flame tornado and another has a suction ability so if you just run into them then you’ll be defeated. In these cases it’s best to take a punish approach. Wait for the opponent to use a move and then hit them. At that point retreat and then start over from scratch. Rinse and repeat your way to victory. I don’t imagine any match will take you more than 2-3 tries to clear it. It’s not a game that was made to be super difficult or anything.

So, the game is pretty short as I mentioned. An arcade mode is around 20 minutes. If this game was still at full price then I’d say that it wasn’t worth it. You can get the game for 5-10 bucks nowadays though. It’s also worth noting that there are around 30 fighters here so if you multiply that all you’ve got a game that’s around 10 hours. That’s pretty good right? There’s barely a story though so there’s not a lot of incentive to playing the game with everyone. Most games nowadays I don’t do all of the Arcade Modes but it really depends. If it’s something like Marvel vs Capcom or Dengeki Bunko then you can bet that I’ll at least play most of the stories for all the characters I like a lot. For a game like Beyblade where there are no opening and ending cutscenes and I don’t know the characters as well..it’s less of an incentive. I didn’t even beat more than one story in Sengoku Basara and that’s a series I’m fairly familiar with.

It’s always nice to have the option though and so I have to say that the game has a fair amount of replay value. The gameplay is also just pretty fun so it is definitely a game you can have a good time going back to. In terms of graphics the game is also pretty solid. We get some cutscenes for finishing moves and the standard ones pop out well enough as well. Don’t expect a ton of detail or anything like that, but there’s enough to keep you pretty well satisfied all the way through. The soundtrack is about as bland as you can get though. There aren’t exactly a lot of choices to pick from here so you’ll quickly find yourself tuning it out. I wish we had gotten a rock theme or something like that.

I should mention that in the Arcade mode it’s a best of 3 set. You get to pick two supporting characters to help you out as each character gets a round. The first character you pick is the one who will get the story though so choose with that fact in mind. Each character also has slightly different special moves and controls so you’ll want to keep that in mind. You can also check the garage to equip new parts that you unlock as you unlock 2 for each round that you complete. There seem to be 86 parts in the game so at that pace you’ll get them all very quickly. I wonder if they’ll slow down at the end because otherwise you’ll have all of the parts long before you beat the game with every character. Hopefully it doesn’t go the route of giving you duplicates later on. I always thought that strategy was a forced way of adding length to the completion time.

Overall, Beyblade Metal Masters is better than the last DS game, but it’s certainly nowhere near the level of any of the home console installments. I’m not sure why the games aren’t trying to be more ambitious on the portable. I do have a 3DS game I’ll be playing soon so we’ll see how that one fares. Regardless, this is the definition of a pick up and play title. Even if you put the game down for years it’ll always be right there for you to play through again. It’s pretty good and accomplishes in what it sets out to do. If you see the game for a few bucks I’d recommend playing it. Who knows, maybe the arcade mode will be so much fun that you’ll end up watching the show as well.