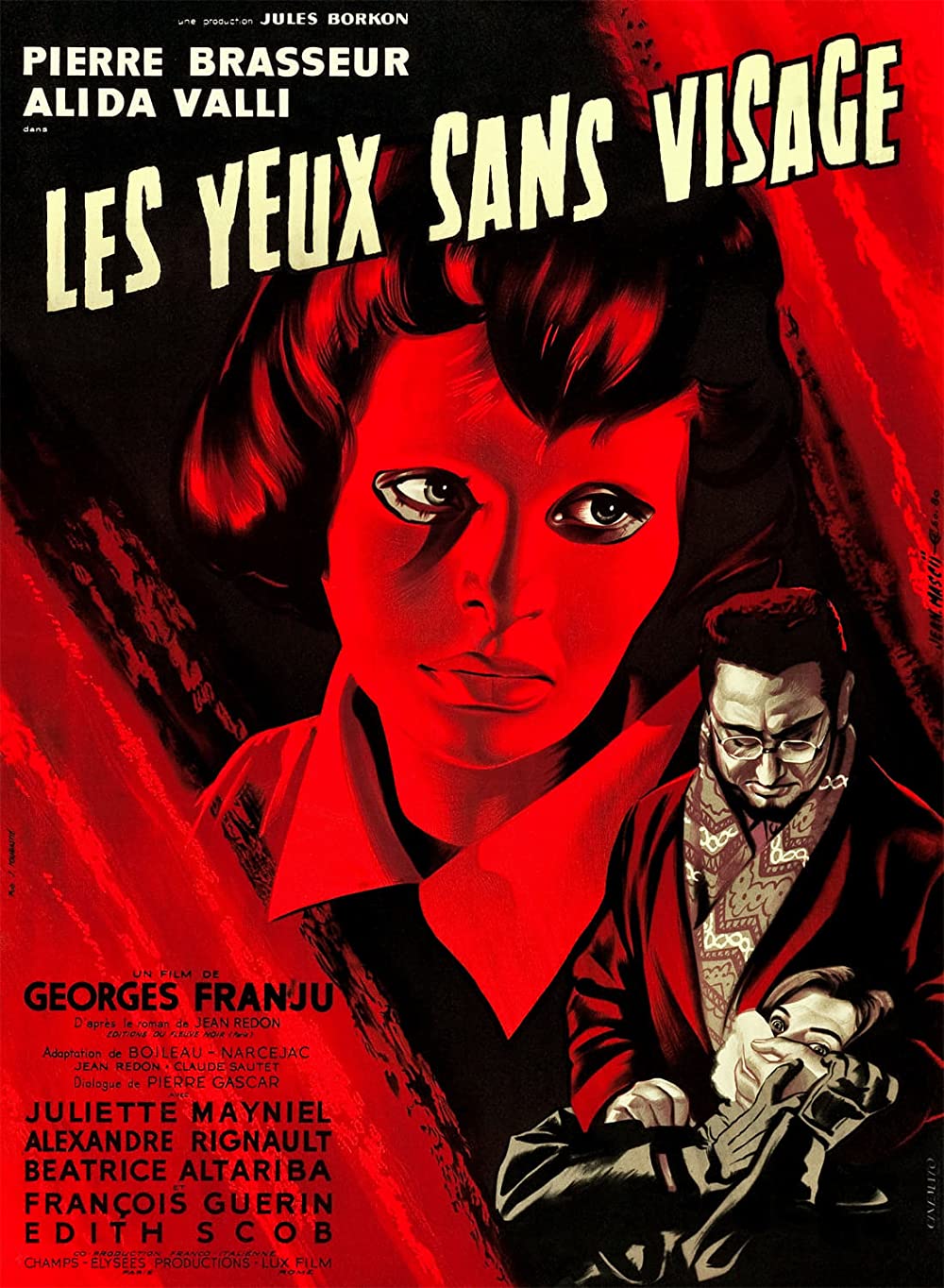 When you’ve got a title like this you know that something’s going to be happening to someone’s face. It certainly builds up the sense of dread as you wonder what’s going to happen next. The film is definitely going for an ominous feel as there are long stretches of silence but ultimately the film just doesn’t land and I would give this one a thumbs down.

The movie starts with Louise tossing a body into the river on behalf of Genessier so nobody will suspect a thing. See, Genessier’s daughter was in a bad accident a while back and so her face is quite disfigured. He has decided to try getting someone else’s face to use in her place but no luck yet. Each face just hasn’t worked and he aims to continue performing these experiments. The cops notice that girls are going missing but they have no leads at present. Can they figure out what is going on before more bodies continue to pile up?

It’s your classic evil scientist scenario here with Genessier trying to justify what he is doing in the name of science and helping his daughter but the guy’s just crazy. He doesn’t feel anything with murdering all of these innocent bystanders and was also running experiments on his dogs. Definitely checks off all the boxes for this kind of insane villain. You’re just hoping the heroes can put an end to him before too much goes on.

While this isn’t the kind of film that has a lot of deaths or anything like that, we do get a rather brutal surgical scene where someone’s face is removed. That almost seems out of place in what is otherwise a very tame film. It certainly sets the stage for how this guy is insane though. You’ll want to tune out for this moment but otherwise there aren’t many other intense moments like that. Someone does jump off of a building (Well more like pushed) at one point though and we see the aftermath.

It goes without saying that Genessier just doesn’t make for a great villain because we’ve seen a million evil scientists before and most of them were more interesting. The goal of wanting to help his daughter could have made him more interesting but that plot point isn’t played up as much as it could have been. If anything this seems more like an excuse and Genessier was going to do whatever he wanted anyway. This just gave him his justification for going the extra mile.

Christiane is the daughter in question and she’s had a rough time of it because her face was severely injured after the car crash. She seems to have lost a lot of her empathy over time though as she just watches Genessier murder these innocent women. She finally steps up near the end of the flick which was good but it was just so late into the game.

Meanwhile you have Jacques who was engaged to Christiane but believes her to be dead after Genessier framed that situation. He comes in handy since he is the one who starts to tip off the police but unfortunately he doesn’t have a lot of evidence and doesn’t investigate the situation as much as he should have. If not for Christiane taking the situation into her own hands then he ultimately wouldn’t have ended up helping out all that much.

Louise is Genessier’s right hand woman and she is certainly devoted to the cause of helping him out. No matter how corrupt he gets, she is willing to do the dirty work. We learn that he helped heal her face in the past but you’d like to think that she would have still stopped him once he became a mass murderer. Devotion being placed into the wrong person is always quite tragic. No excuses for her, she’s just as guilty as he is.

Finally you have Paulette who is used as bait by the police to try and see what’s going on here. Unfortunately they don’t do a very good job of this. It’s always a bit irritating when you use someone as bait but don’t actually have someone around to help if things go sideways. They didn’t think to have at least one officer outside to make sure that she got home all right? That seems like a really big oversight into the entire plan. By all accounts Paulette would have been dead if there wasn’t some outside help.

The Inspector loses some points there but otherwise he was a fun character. In a way he reminded me of Poirot, not just because their names were similar but he had those kinds of mannerisms too. The guy seemed to know what he was doing so the plan being so bad was an outlier I suppose. Ideally this would have made the doctor even more of a suspect later on but by then it would just be too late.

This film goes through the motions of being an evil scientist film and the pacing is decent, but ultimately I would not say that it was a good movie. The surgery scene is iffy and seeing the before and after pictures of the face can also be a bit disturbing. The Doctor gets away with a whole lot here and while it was nice to see him taken down by the dogs at the end, you feel like he got away with way too much before the film was over.

I will give the film credit in one area though which is that the soundtrack was actually rather decent. There’s a circus theme that plays several times during the film and it’s actually the villain theme. You wouldn’t really guess that at first since it seems so upbeat but maybe that’s to show just how shady these villains really are. That to them, murder and kidnapping is as normal a thing as going to a circus. Perhaps that is reading too much into it though.

Overall, Eyes Without a Face is one of those films that reiterates why you must not lower your guard too much around strangers. If someone asks to show you a possible place to live and then tells you to get into the car…it’s not a good idea. Going anywhere at the drop of a hat when nobody knows where you are going is not a good idea. It was a safer time in this era but at the same time it’s why so many crimes would happen. Based on how easily the characters would follow total strangers, it seems like people were too relaxed. Give this film a pass and check something else out instead.