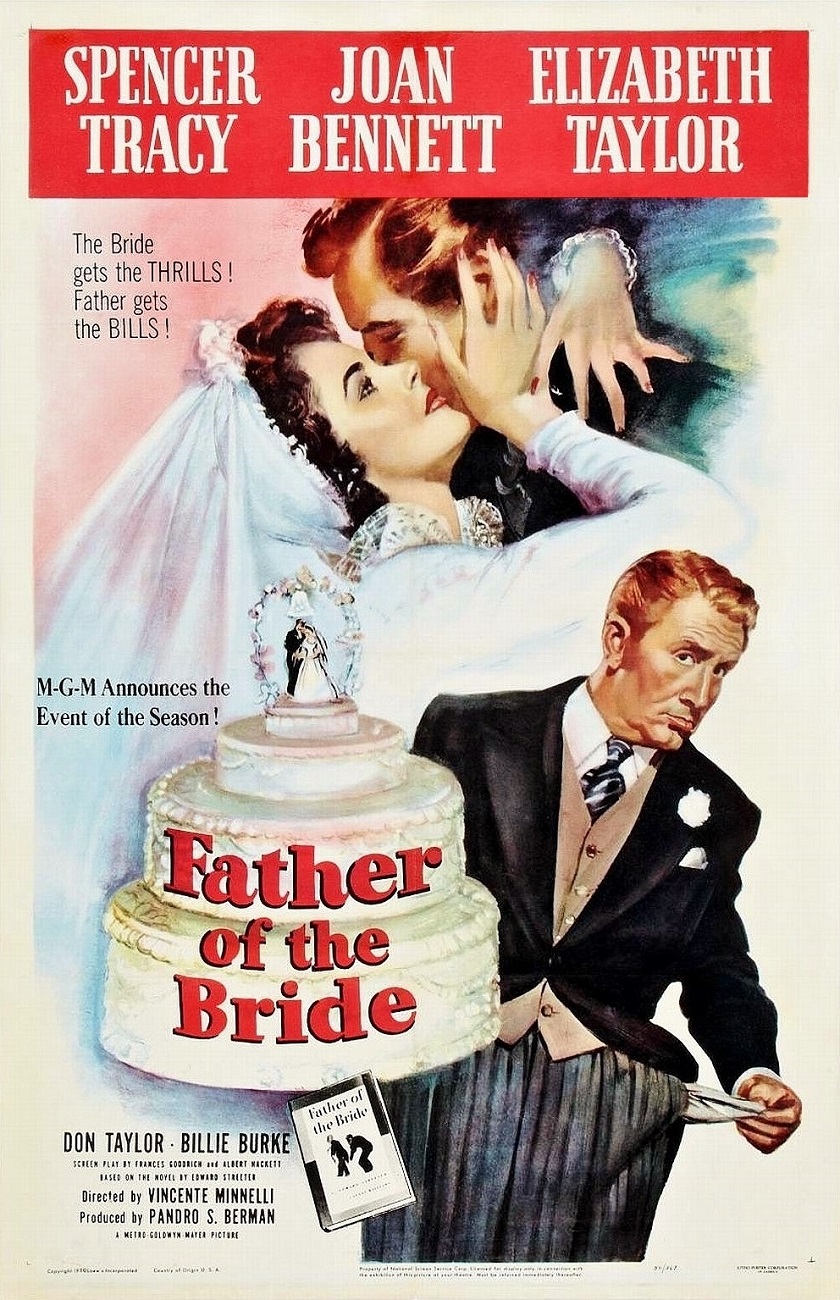 When you’ve got a movie with a very laidback premise like this you know that it’s going to feel like a very long movie. Whether this is a good or bad thing will definitely depend on the writing and the characters. If this is handled poorly then that’s really game over but if handled right then you’re in for a fun time. Fortunately I can say that this was a fun film. While it was hard to get behind the actual romance, I did like the main guy’s reaction to all of this.

The film starts off with Stanley in a fair good mood. It’s been a nice day and he’s enjoying dinner with his family. That’s when his daughter Kay drops the bombshell that she likes a boy named Buckley and intends to marry him. This sends Stanley into hysterics while Ellie is thrilled with the idea because she wants to be a grandmother. The next bombshell drops which is that according to standard customs, the parents of the bride must pay for everything and spend their whole life savings on the wedding. Stanley’s life has now been turned upside down…can he make a comeback here?

So in a lot of ways I sympathize with Stanley because I do think the whole wedding gig has been absolutely taken over by corporate and nobody realizes it. It all starts with the Wedding Ring that you have to spend a ton of money on as a symbolic gesture of love all the while not realizing that you are just tossing money into the tank. Why do you think so many people believe they have to spend a fortune on the wedding and make it a big event where they hire planners and such?

Big Business came up with that and have been laughing all the way to the bank for years. I’m telling you it’s just not worth it. If you ever end up getting married, make it a very small affair where you just get it official and don’t even worry about the ring. Once that’s done you can have a fun house party where everyone brings a dish of food and you all celebrate. Now you’ve taken the middle man out of the equation and just made it a really fun time like a Christmas party or something like that. You’ll have also saved on thousands of dollars minimum which is a really big deal.

You can then put that money to far better use. In the film we also see that Stanley has to pay for every person that attends. Forget that. I’m calling up my friends and telling them that they’re paying to attend if we’re doing some kind of formal gathering. Everyone pays for themselves and that keeps it even stevens. Definitely makes it all a whole lot better if you think about it that way. Of course you don’t even run into that problem if you do my suggested way. There are a ton of ways to save money on this while still having a great time with the wedding if you think it through. Naturally you should be thinking that through with your partner well before the actual date so it doesn’t become a surprise.

Throughout the film Stanley runs into the issue of having to lose money at every corner and that’s why you feel bad for him. He had been saving up for so long and to see it all go in an instant like this has to be rather rough. It’s hard to just get that money back when you’re already later in life like this. Ultimately he’s still a good sport for Kay’s sake and that’s definitely appreciated. He could have been harsh about it but didn’t want to guilt trip her about the whole thing.

Stanley also has a good sense of humor and helps give the film a lot of life. His inner monologues are really solid and the film has great writing in general. He’s definitely thinking things through all the while and he also stands up for his school when Buckley’s father gets a little ahead of himself. Ultimately you can always count on Stanley and he’s the standout character in the film.

Ellie is solid as well. She’s his contrast for most of the film as she is thrilled about all of this right from the jump. Ellie also wants a really big wedding and is eager to help out with it. At times Stanley gets so nervous that he ends up getting her nervous as well but in the end she always bounces back.

Then we have Kay but she would be my least favorite character in the film. She’s constantly bursting into tears and running off whenever she is confronted in even the smallest way. This even leads to her nearly cutting all ties with Buckley after we’re super deep into the film. He calls her spoiled at one point and you definitely see it. It’s to the point where she’s super irresponsible about the whole thing. Imagine if they hadn’t talked her out of it and she did cancel the wedding? A lot of the expenses can’t be taken back so the parents would have been out of a ton of money with nothing to show about it.

Even then Kay seems more upset about herself than the money. She barely ever lets Stanley get a word in edgewise before panicking or getting super defensive. Even when the characters are being very pragmatic like discussing which invites to cancel since they were over budget she runs off and starts yelling. It just ended up being impossible to like her and she made the whole situation a lot tougher on Stanley and the crew than it needed to be. The first red flag was not even telling her parents that she was in a relationship so serious that she was ready to get married.

Finally we’ve got Buckley and he seems okay I guess. The guy is constantly nervous but seems successful in his business. It raises some questions for the sequel but here he is really well off to the point where Stanley is rather surprised about it. Buckley’s got his priorities in order and will ultimately be going places. At least they know Kay will be in good hands. I think Buckley does try to make an attempt to do the right things an get a good bond with Stanley even if that tends to be tough.

As the whole film is building up to the wedding that is why it can feel long if you aren’t engaged. To me the film does a great job of staying interesting but I will say that it still does feel long. Because the plot doesn’t change much you can really see how it takes a while to get to the end. It’s a good movie though so that just means there is more time to enjoy the characters squirming and wondering what to do.

Overall, Father of the Bride is a pretty good movie. It doesn’t overstay its welcome even if the length gets a little close to that point. You’ll probably sympathize with Stanley a lot on all of the wedding traditions that have to be kept because they’re historic even when they aren’t particularly practical. I can’t imagine tossing so much money up for an event like that but I know that it’s still the popular thing to do. The movie got a sequel so you can expect a review on that pretty soon as well.