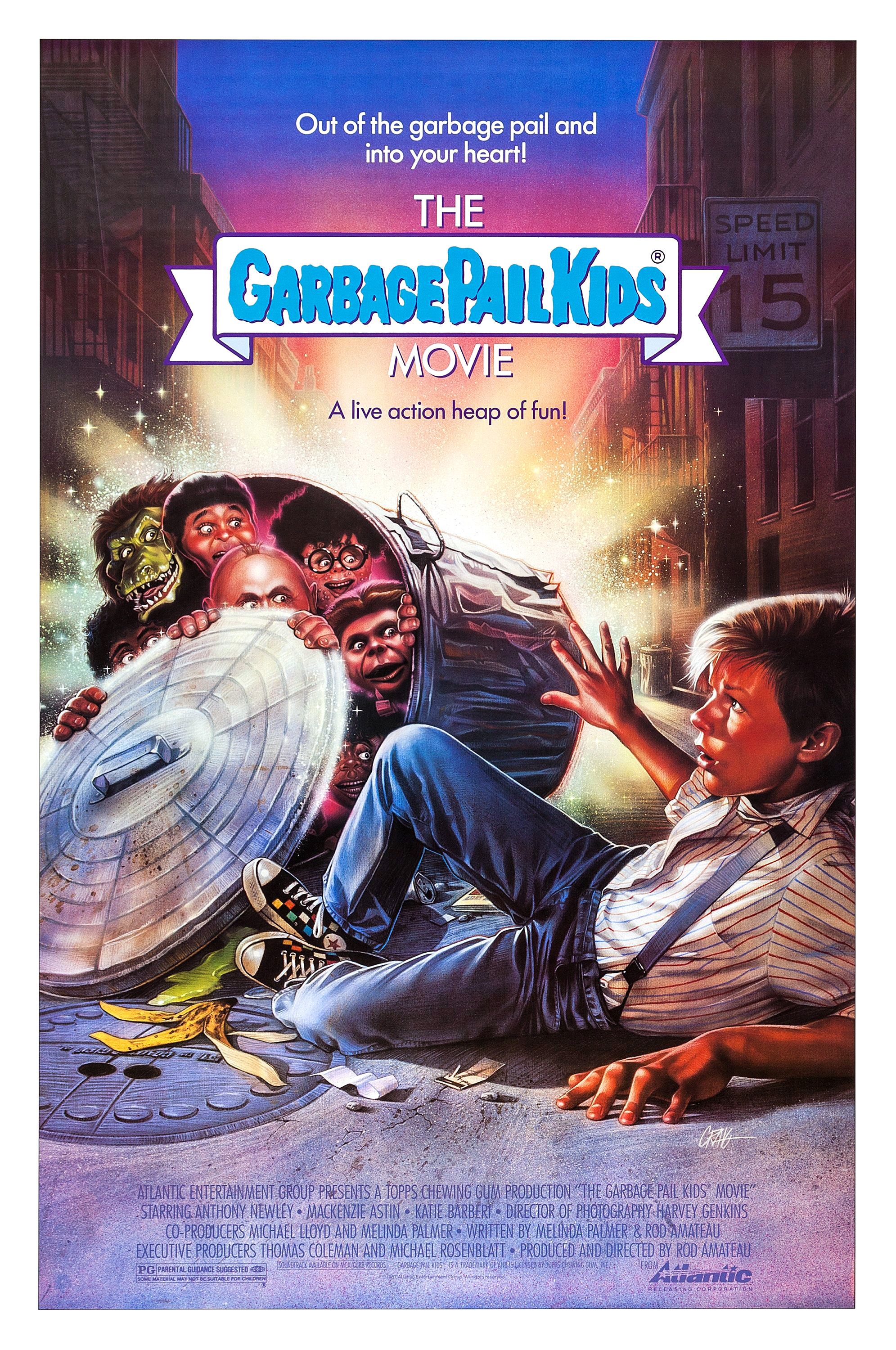 It’s time to look at a story from below the pail. I’m afraid that this film lives up to its reputation and just isn’t very good. There’s a lot of constant crude humor here and the kids look so bad that it makes the film hard to watch. Throw in a long run time and a poorly handled romance and you’ve got yourself a recipe for disaster. There really isn’t much redeemable in this film.

The film starts with Dodger getting bullied by Juice and the gang. He heads back to the magic store where he works part time. It’s led by a magician known as Manzini who has led a relatively quiet life as of late. He wants to keep it that way and warns Dodger not to let the Garbage Pail kids out. Unfortunately the bullies show up again though and beat Dodger up. While this is happening the pail falls down and the kids are set free. They save Dodger from certain death and he decides to enlist their help in impressing Tangerine. They agree to help, but warn Dodger that this may not be a good thing. So begins their tentative alliance.

You’ll definitely be asking yourself quite a few questions here. For starters, the Pail Kids seem almost too nice. Keep in mind that they were being held in the Pail against their will for many years. You’d expect them to hold some kind of grudge or something right? Nah, they don’t really seem to care much. Manzini very openly talks about how he’s going to stuff them back inside and they’re fine with it. Sure, the outside world is dangerous, but judging from how the kids constantly want to break out you can tell that they’re okay with this. The kids also seem like public knowledge to an extent as there is a whole prison just for them. This plot actually gets pretty dark at times as we find out that the kids are crushed. Maybe that’s how they are turned into cards.

Either way it’s hard to like any of the kids though as they just can’t help but do a crude humor joke whenever they appear. None of them have any self control either and aren’t very smart. There are no good qualities left for them so by this point they’re simply doomed. With a main cast like this there is just no way that the film can recover. Dodger also isn’t a good character as he keeps trying to go after Tangerine even when it’s clear that she couldn’t be less interested. She’s using him and isn’t even that subtle about it. He’s also quick to lie to impress her and we can’t forget that Tangerine is already with someone. Dodger just never had a chance and was deluding himself.

Tangerine is with the bullies from the start so that should clue you in as to what kind of character she is. I’d definitely give her a thumbs down here and the rest are just as bad. After all, the leader (Juice) gets a kick out of beating up a little kid. Not exactly the hallmark of a good character right? The only good character would be Manzini and even then that’s mainly just in comparison to everyone else. He has some pretty good lines like when he explains that he always marches forward instead of retreating. He also lands a good combo near the end. For the most part he does get beat up the whole time though.

As I mentioned early on, the film is quite long which doesn’t help either. It’s nearly two hours and you don’t want to be hanging around the Garbage Pail Kids for that long. They can’t hold their own movie so what are they possibly going to do for 2 hours? Nothing good, that’s for sure. The writing definitely gets a hard thumbs down because the film doesn’t make sense and it isn’t entertaining. We only get a few decent lines throughout the entire movie. The romance is pretty terrible since it’s obvious from the start that it won’t work out due to the age difference and the fact that Tangerine is one of the villains. There are no big twists or interesting moments to save the film either.

For one last logistical thing as well, lets look at a scene midway through the film. Dodger gets a ride with Tangerine to a fashion show. They start driving during the day and don’t arrive on the scene until it’s well past dark. As they are getting ready to head home Juice shows up so Dodger hides while they drive away. He then walks home……somehow. Think about how long the journey would be if the drive was many hours long by car. He would be walking for over a day at least and the kid isn’t very old. Maybe I’ll be optimistic and assume someone ended up driving him home, but personally I’m thinking this is just one of those logic moments that the film didn’t really think through. After all, the audience probably wouldn’t be focused enough to notice by this point anyway so it was a low pressure moment for the writers.

Overall, The Garbage Pail Kids is definitely not a film that you are gonna want to check out. It’s just pretty bad. It’s only PG so it’s not like the film throws in animal violence or anything like that, but in a way this speaks volumes on how bad the film is. After all, if it can get such a low score without those factors, well you can imagine how dicey things can get here. The only even slightly good thing about the film is the soundtrack which is admittedly pretty good. Still, if you haven’t seen this film yet then there’s no need to change that. Don’t let curiosity get the better of you as the film isn’t even bad in an entertaining way. It’s just not a good title and I can’t honestly see how the franchise ever got big in the first place.