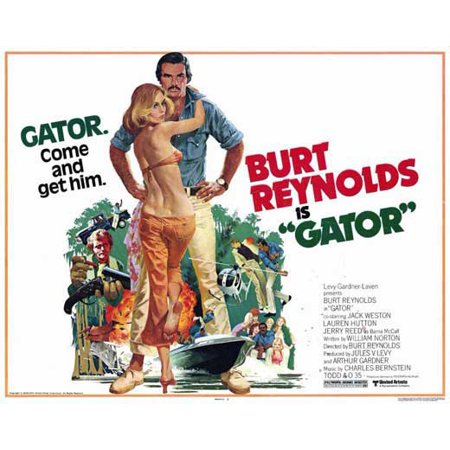 It’s time to look at the film known as Gator. You may be thinking of a monster film or something based on the title, but this one’s actually a pretty down to earth story about the government blackmailing someone growing drugs into helping them nab some others. It’s a reasonable movie, but one that doesn’t really have much to it. It goes through the thriller motions, but doesn’t really go out of its way to do anything else. It’s also hard to get behind the main character. How could he possibly get caught up in this drug stuff again after his first adventure??

The movie starts off with Gator and his family enjoying a peaceful morning at the cabin. Their day is thrown for a loop though when a bunch of helicopters show up to try and arrest them. We get a chase scene with Gator beating them up while on a boat before eventually succumbing to their blackmail. Since he has started growing Moonshine again they want Gator to head to a shady town where a lot of drug dealing is going on. The government had their eyes on Gator from the start though given how they were also going to blackmail him through his father. It was a lose-lose situation for the hero. So Gator heads to town and sees that the leader is an old friend of his. Maybe he can talk some sense into the guy…

I think we can’t really talk about this film without talking about why Gator isn’t ready for this line of work. He slips up constantly with one instance of this being particularly bad. He already knows that Bama is a bad guy, but is holding out some hope that he’s not so bad. Maybe he’s one of those nice gangsters who only murders people sometimes right? Well, he quickly finds out that this isn’t the case so he walks up to Bama and says that he’s leaving. Not a smart play, but if he’s got a plan then maybe it’ll work out right? Well, that’s not really the case. Bama agrees to this but offers Gator one last drink first. He makes an obvious motion to his henchman who spikes the drink and then Gator downs the whole thing. At first you figure he has a plan, but this isn’t the case.

Gator slowly succumbs to the drink while insulting the villains the whole time. Even that could have been a plan like he was hoping he’d get punched to block the effects of the drink but that didn’t happen either. So ultimately all this leaves Gator looking absolutely terrible. By the time he is able to make a comeback at the very end of the film as he runs over some people you are still left doubting his abilities. Even leaving Irving by himself so he can mess around with Aggie wasn’t a good idea.

The romance with Gator and Aggie definitely wasn’t good. It’s one of those really rushed affairs where they just get together to check off a few boxes, but ultimately it doesn’t really add to the film and comes across as pretty pointless. I preferred Aggie’s character to Gator’s though. At least she was actively looking into the criminal situation and trying to do something about it. Gator only ended up doing something after he was blackmailed into it. Aggie’s profession is also super dangerous since she is a reporter in a city that has been completely conquered by crime. That’s never an easy task.

Meanwhile we do have one more rookie in the film. His name is Irving and he is the main American agent. Here’s my problem with the guy. He talks a good game about being from NY and all, but then he walks into a bar and gets drunk. Naturally he gets beat up by the villains pretty badly, but why would he go in there like that? He also let the villains steal his gun which was terrible. Pretty much any scene with the guy was one where you knew he would mess up. Then there is Emmeline who is here as the quirky character with her cats and all. She thinks of this as a game and does her best to slow everyone down. It’s fair to say that things would have gone smoother if she had just given them the keys or been willing to leave her cats, but naturally that wasn’t going to happen. Bringing the cats is just putting them in harm’s way.

Also, this is another scene where the government looks suspect. If the proof that Bama is a villain is in the courthouse, why can’t they just grab it? That seems like something that would be really easy to do. Also, why didn’t Bama realize that they had the records? There’s a lot of parts in this film where you wonder why the government can’t do anything. Sure the town is bought out, but apparently not the rest of the country since they’re gunning for Bama. It should have been so much easier to take the guy down.

As for Bama, he’s a pretty generic villain. The guy likes selling drugs and going on power trips all the time. He’s got a shotgun and can fight a bit, but there’s nothing more to him. He’s certainly not my kind of villain. His minions have more character if anything. The big one is like the Jaws villain from James Bond. He’s pretty big and has a lot of strength, but ultimately that doesn’t mean much in a gun fight. Then you’ve got the other guy who is surprisingly durable since he survives a ton of things in this film. As a trio they were hard to stop.

Overall, While I do consider this film to be an upgrade over the first one, it really doesn’t hold up on close inspection. You’ve got a weak character cast in a rather bland backdrop. Everyone makes the wrong choices at all times and the film has to rely on quirky characters and a rushed romance to pad out the time. There just isn’t much here so the film has to drag it all out. It can be fun at times, but not really fun enough to get the film above the break even point.