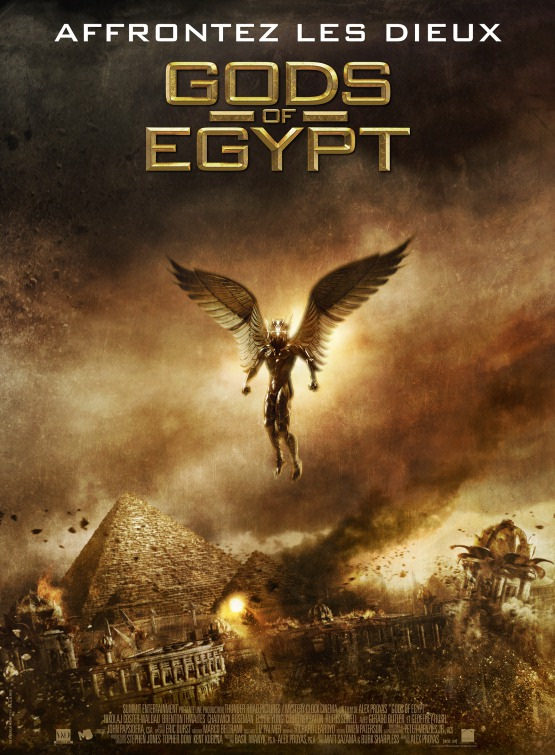 It’s time for a modern action film. Gods of Egypt is certainly very different from a lot of the films that I’ve reviewed lately. I’ve been saying that more and more lately so I suppose that I’m getting a good variety here. That being said, this is another film that certainly could have been better. The characters were very annoying for the most part with the big action scenes really being the only strong parts of the film. Well, I suppose the visuals were solid as well, but those two things go hand in hand.

This film takes place in Egypt, a long time ago. The gods still live among the mortals and they all have inflated egos as a result. One day, Set returns to the kingdom in time for a large ceremony. He is bitter at not being invited so he takes the kingdom over and steals Horus’ super abilities before banishing him away. The country falls into chaos as everyone now serves him and must go to war constantly. Zaya realizes that the only way the day can be saved is if Horus is able to go back to full power and restore peace to the land. She convinces Bek to go and recover his eyes so he can go and give them to Horus. Bek manages to get one of them and gives it to Horus, but the two of them will have to move fast if they want to get the other. All of Egypt is on their tail now and Zaya is also in a tough situation at the moment. Well, Horus is supposed to be almost invincible so this shouldn’t be too hard….right?

There are a lot of missed opportunities in this film, but lets start off by talking about the characters. Horus isn’t very good, but I could have told you that from the trailers. He talks an incredibly good game, but this doesn’t prevent him from being saved over and over and over again. He is simply not ready to deal with threats of this level as he has a decent amount of strength, but no durability. Without both eyes, he is basically just a Captain America level opponent. Horus is also not a good character as he basically admits that he was using Bek the entire time. He doesn’t care for anyone but himself. The end of the movie tries to get you to think that he is a changed man and will be more of a hero from now on, but it was way too late by then. You would have thought that the exile would have helped shape him into being a better person, but all it did was make him bitter. His romance with Hathor is also quite bad.

Hathor is the goddess of love and she loves to flaunt this fact whenever she is on screen. She can control anyone with a glance unless they have already found true love and she will use this ability on anyone just to show off her superiority. Luckily, Bek is immune to this power because he is just that good. Hathor is very annoying as pretty much all of her lines are her flirting. It’s hard to root for her and Horus because she seems to play the field so it doesn’t seem all that genuine. It was a side plot that didn’t actually add anything to the film and could have certainly been removed. Taking Hathor out of the film would have been a good choice.

Bek is the main human. Horus gets a larger role, but Bek is fairly crucial. He may not have any super abilities, but he is athletic so he can navigate through mazes quite well. The hype may have gotten a little overboard when he infiltrated a labyrinth that was made to stop other gods, but he mostly spends the rest of the film panicking and losing so that helps to keep things balanced. I didn’t like Bek and he is fairly generic. He takes Horus’ betrayal a little too well and I would have liked him more if he could actually fight. Zaya was all right, but she was a little too far on the other extreme as she had way too much faith in Horus. He was undeserving of all the praise that she gave him the entire time. If only she had been around to hear Horus admit that it was all a ploy. She never properly learns about this and just acts as if he is an awesome person the whole time.

Set is the main villain and he’s fairly standard as far as those go. He’ll remind you of the villain from Prince of Persia or Clash of The Titans. He does have a fairly cool god mode though so that at least makes him more memorable than the others. It may be a little hard to take him seriously since he couldn’t handle Horus in a fair fight right from the start, but he is still decently strong. I think that giving him a super form for the final fight was a little too much though. He became too strong, to the point where the writers had to get involved. When you need help from the writers, you know that things have definitely gone too far. At least Set isn’t distracted or hesitant with his goals though. He decides that conquest is more important to him than romance and never looks back. I’d say that Set handles his role as the villain quite well.

Ra is one of those high above beings who acts very wise and all, but actually just makes the situation worse the whole time. He makes both Horus and Set feel bad while fueling his own ego, but he doesn’t realize that this could be a little dangerous. He knows that Set is evil and that Set is willing to destroy anyone in his way. Did Ra really believe that he was the exception? Even his concept of a “reward” for Set was quite sad as nobody in their right mind would give up their expanded kingdom for a lonely job in space. See, Ra’s only job in life is to fire a few blasts at a space monster that pops up every day. He literally has to do the same thing every single day for all of eternity. It’s easy to see why Ra wants a replacement, but nobody is ever going to want to take that job. Not to mention that Ra should have still sided with Horus since he was clearly on the side of justice as opposed to Set. Ra seemed to just want to remain on the sidelines and ultimately that wasn’t a good move.

Finally, we also have Apophis. He looks pretty similar to the Krakken and Apophis is a very large monster. His physical strength is enough to cause everyone to worry. The only thing that can defeat him is a well placed fire blast from Ra’s staff. As sad as the situation is for Ra, it is all the worse for Adophis. He has no way of dodging the blasts since he is incredibly slow and he has no blasts of his own to counter them. All he can do is roar a lot and then retreat. Considering that he does this every single night, it probably gets old after a while. It also makes for a fairly anti climactic ending. Adophis is a cool character in theory, but the execution could use some work. If it was meant to be comical, then it succeeded.

There were some other characters, but their roles were fairly minor. Anubis looked decent as he commands quite a presence in the underworld. The god of wisdom was annoying, but I did find it a little funny that he could not solve the riddle. It’s like introducing the Flash in a Justice League movie, but he is then unable to win a speed contest so Superman has to do it instead. You are completely making the character’s addition into the film irrelevant by that point.

As mentioned earlier, the fights are what is really solid here. The first action scene isn’t all that great as the film goes for an eye pluck which I still find quite gross and unnecessary. After that, the god mode battles are pretty hype as the two of them fight in the air at high speeds with a lot of feats. Ra’s quick skirmish with Set also looked really good as both of them boasted a lot of destructive power at the time. The visuals always look sharp as well since there is a lot of gold and fancy architecture surrounding the place. The fire blasts and armor are also very crisp and would fit well in a comic book film. When the action is in place, Gods of Egypt can get you to think that it is a very solid film.

Gods of Egypt could have been so much better than it was though. Seeing all of the gods fight each other would have been awesome since they had such cool super forms. I also think that some of them were way too weak as many would die in an instant to very weak attacks. If they are gods, then they should all possess a good amount of super strength and durability so that they can really earn the title. The random ones barely looked like they were any stronger than humans. Size was the only thing that they had on their side. I also would have liked to have seen the monster be a little tougher or put up more of a fight. The whole ordeal was way too one sided for my liking and it would have been more entertaining if it was a good match. The humans weren’t really necessary for this film either, just focusing on the gods and giving us an epic action story would have sufficed.

Overall, Gods of Egypt is an all right film. It’s fairly entertaining and has a decent amount of replay value. What holds it back from being a really solid film is the fact that the writing is simply sub-par. It’s not incredibly cringe worthy of anything like that, but it certainly doesn’t feel as professional as it could have been. Horus being too overconfident is played up to an extreme that just doesn’t make sense. Nobody would be so confident after being beaten so much. Horus even lost to minion and random monsters throughout the film. That’s just plain disgraceful. The film never drags on at least and I do like the ending. Considering the circumstances, heading to the underworld is something that Horus should do immediately. He has enough power to defend himself so the guy doesn’t have much to worry about right now. He shouldn’t let his guard down though since Horus is way too arrogant for his own good. If you’re up for a quick action film, I’d recommend this one. It may not be the best, but it’s not bad either. Also, how many Egyptian action films have you seen anyway? It may be good to add another one to your collection.