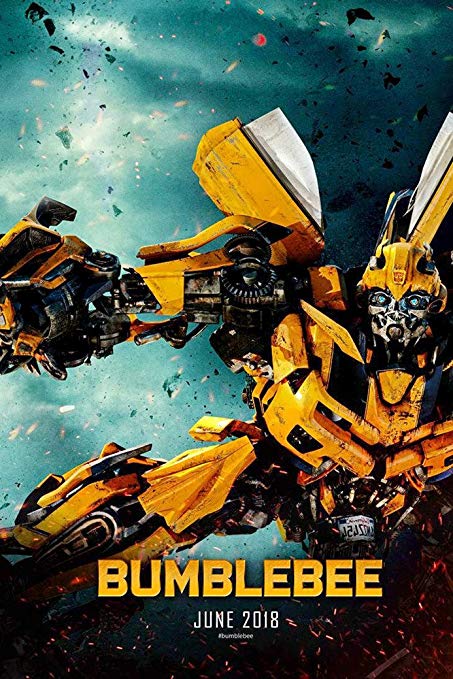 It’s time to look at the new Transformers prequel/reboot that came out. I’ve never been a big fan of the live action Transformer films. The franchise is still awesome and the G1 animated film was excellent, but for some reason it just couldn’t make the jump to live action. A large part of this could likely be blamed on Michael Bay and the Transformers not getting enough the respect a franchise of its caliber should have. A good adaption should be amazing. This one isn’t quite there yet, but Bumblebee is certainly an improvement and is actually a good film overall.

The film starts with a really nice action scene on Cybertron as we see Optimus Prime and a lot of the classic Autobots dealing with a Decepticon invasion. They are being pushed back though and Prime decides that they have to fall back. He sends Bumblebee to Earth to protect it and ultimately they will all converge on the planet to set up a counter strike. Bumblebee manages to make it to Earth, but a Decepticon follows and breaks his voice box. He has also lost most of his memories. We then cut to the main heroine of the film, Charlie. Charlie’s going through a pretty tough time as her father died and was quickly replaced with a new one. She has yet to warm up to him and has started distancing herself from her family. Her life begins to change when she finds Bumblebee and he becomes her first friend. Can she help him protect Earth from incoming Decepticons or is this all too big for one person?

I can’t stress enough how awesome the first scene is. I would certainly watch a movie all about the Cybertron fights and I think it would very quickly go down as the best Transformers title. It would basically be a CGI film at that point but the human characters really aren’t necessary so that’s not a bad thing. There’s no reason why Transformers has to be live action, especially if it’s a prequel. It’s almost a bit of a tease since you know the bulk of this film will be on Earth, but a strong opener is always a good thing to have for any film so I think this was the right move.

Also, the action does stay at a high level even on Earth. The previous films didn’t really have any choreography. The characters would typically just slam each other with normal hits but there wasn’t much to the fight scenes beyond that. In this film you actually see a lot of good hand to hand combat. Bumblebee is a really small Autobot compared to most of the others so as you would expect he needs to fight with a lot of throws and judo combos. The film shows that to great effect and the fights here have so much more energy than previous films.

The special effects are also much better. The characters actually look like Autobots and Decepticons here as opposed to being generic robots in the last few films. The designs are very faithful to the source material. Cybertron itself looks amazing and all of the visuals are just top notch. The soundtrack is also quite good. A lot of big 80s songs pop up here. Sometimes back to back in the same scene. It’s always nostalgic to hear these tunes. I can’t say that I knew too many of them, but the style itself just feels very nostalgic right from the start. It helps make the human scenes more fun.

Jack steals the show here as far as the human characters are concerned. From the start he suspects that the Decepticons are up to no good and is pretty reasonable about it. As he explains….their name is the Deceptiocns! That should be the end of the story. Unfortunately he is outvoted by the top brass so he is forced to work with the Decepticons, but I like that he voices his displeasure over this constantly. He doesn’t even pretend to play ball with them which is good. If you’re that confident that they’re up to no good you can’t shake on it. I hope he will return for a sequel.

Charlie is the actual main character here and she’s pretty reasonable. Naturally she is going through a tough time so she isn’t in the best of moods, but she isn’t nearly as sour as other main characters who were in a similar predicament. She does a good job of doing what she needs to and even her inevitable blowup moment isn’t nearly as dramatic as you might expect. She also ends up helping during the climax. The only moment where Charlie doesn’t look particularly good involves a diving situation. Granted, she never agreed to anything but the way she handled the situation wasn’t amazing. Also, I probably would have kept the window closed in the next scene. Memo is the next door neighbor who shows up and acts as the comic relief here. He’s not nearly as bad as he could have been, but I can’t say that I was a big fan. He seemed a little too desperate to hang out with Charlie the whole time and I don’t think it was just so they could be friends considering how quickly he was going.

So the film had a lot of positives, but it certainly wasn’t perfect. I do think that some of the humor scenes could drag on a little too long. Bumblebee stumbling through the house and breaking everything is definitely an overdone trope. After breaking a bunch of stuff you’d think that he would learn and adapt quick enough to stop making things worse. That doesn’t happen and he almost completely totals the place. I also think Bumblebee being so scared during his first appearance was a little odd. That subplot seemed to stick around as he didn’t even put up a fight towards the climax. I suppose the damage from the opening scene may have also prevented him from fighting, but I was still a little puzzled the whole time. Other humor scenes worked fairly well though like the Ricky Roll theme getting a quick cameo.

Charlie’s family also wasn’t too bad. I can see why she wouldn’t get along with them, but I thought the parents did a reasonable job of being annoying while still feeling genuine about looking after her. They weren’t trying to be annoying and at the end of the day they were a little helpful. The new dad more than the Mom, she could be a bit much at times since she was more reluctant to help. The bullies were certainly dramatized, but I did like the fact that they didn’t recognize Charlie outside of her job. In movies a lot of time they seem to have perfect memory but realistically I doubt they would remember everyone they make fun of. The revenge against the bully was a bit drastic though and I think that scene could have been cut. I didn’t find it particularly funny.

Overall, Bumblebee was pretty good. It was certainly a lot better than I had expected it to be which helps its case quite a lot. I think it will hold up to repeat viewings as well even though I certainly don’t plan on re-watching it anytime soon. The pacing is on point with an action scene always being around the corner. The film can try a bit hard with the humor at times, but at least it never devolves into dirty jokes like the old film. Whether you find them funny or not, I wouldn’t say that any of them are terrible. If you are avoiding the film because you have had poor experiences with the previous installments don’t let that stop you from watching this one. Bumblebee really feels like a brand new start for the series and if the quality stays at this level then I can finally start looking forward to these Transformer films again.