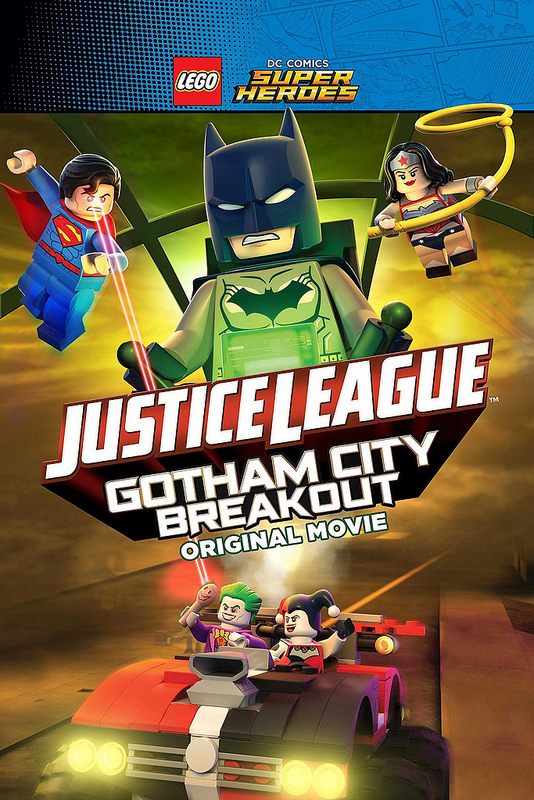 It’s time for another lego film. In this one, we get 2 main plots instead of 3 or 4 like usual. This allows each individual plot to be fleshed out more but of course it means that you have to like both or you’re out of luck. Fortunately, both plots are pretty solid. The Batman plot ends up winning for me, but both of them are on the up and up.

The film starts with Batman’s friends deciding that he needs to take a vacation. As such, Nightwing and Batgirl take him to the place where he first learned how to become Batman. Batman’s master is known as Madame Mantis and she is the one person that he actually fears. It can be a little novel to see Batman actually scared of someone (for 2 seconds anyway) but the next twist made the whole thing even more interesting. Basically, Mantis had actually been kidnapped and Deathstroke had taken her place. Here’s why this is interesting.

For starters..Mantis had actually been beating Batman. That means Deathstroke is even more lethal than he used to be. He also saw a side of Batman that few ever have..his nervous side. Now, Batman claims that he knew this from the start which was a nice save but you have to decide whether you believe it or not. At the very least, Batman did end up winning in the end. It was a great way to start off the plot, but maybe that was also a bad thing. The rest of the story (Batman’s side) isn’t quite as exciting as this initial confrontation. The fight was epic, fast paced, and well choreographed. It was just hard to top it.

Batman and friends discover an underground bunch of beings who work under Madame Mantis and together the gang teams up to take down Deathstroke and foil his evil ambitions. I can’t say that I liked the Trogowogs much and I had to look their name up online because there is no way I was gonna remember it. The revamped origin story of Deathstroke and Batman was pretty cool though. I wouldn’t mind if it became canon since it adds an extra layer of intensity to their rivalry.

Meanwhile, Superman is left in charge of protecting Gotham while Batman is away. Arrogant and over confident as usual, Superman believes that the city’s villains are a joke. This leads to him being tricked by the Joker and losing to Poison Ivy. The whole film is a lesson in humility for Superman. While I could start talking about plot hax and how Batman’s villains really would be a joke to Superman…it’s so self explanatory that I won’t even bother. I don’t mind seeing Superman get put in his place either. His over confidence is why I like the character, but I definitely don’t mind poking a little fun at him. Superman is eventually forced to call in Cyborg and Wonder Woman although they also have a hard time with the situation. It’s a little odd since they certainly aren’t overconfident, but it proves what Batman has been saying for years. He’s the best member, the other Leaguers are just here to back him up!

A big part of the plot is that Robin wants to help out, but Superman constantly patronizes him and reminds the poor boy that kids can’t fight super villains. Superman’s technically correct if this was a normal universe, but in comic book land we all know that kids can be pretty tough. Robin works on his homework for a while, but eventually realizes that without him the team is doomed. He gets set to win and ultimately proves to be the League’s secret weapon. Who’d have thunk it?

As per usual I have to give a shoutout to Batman’s voice actor. The specials really wouldn’t be the same without him since the dialogue is part of why the specials are so fun. Batman just steals the show with ever appearance that he has. The rest of the characters are solid as well and fulfill the parts as best they can, but Batman’s just feels totally legitimate. He sounds like the guy from “How it should have ended” and maybe it’s just easier to voice Batman. Who knows, but either way it works well.

The soundtrack is also pretty good as per usual. The Lego films have been getting progressively better with the fight scenes or at least consistent. The format has shown that it can actually deliver serious fights when it wants to do so. The fight with Batman’s teacher at the beginning was definitely the best one in the film. I’m still not crazy about Lego animation and at this point I don’t think I’ll be changing my mind on that anytime soon, but it won’t take you out of the film. If anything, I’m fairly used to it by now and it still beats Stop Motion. That one’s definitely aged the worst.

The film’s pretty short as always since it’s just over an hour. 70 minutes seems to be everyone’s favorite go to for short films. The old films from the 40’s-60’s were always around 70 minutes like the Universal Monster films and same with anime. Maybe there’s some kind of research which shows that 70 minutes is just right. I do admit that it helps the pacing to stay consistently fast so I suppose it has worked out quite well. With the Lego style, I suppose going to 2 hours could be hit or miss, but if done well it could definitely work.

Overall, This is a pretty fun DC special. It’s not the best Lego adventure, but it can hold its own with ease. I am glad that Batman’s plot got a lot of screen time since a DC special without him just would not work well. This one also didn’t have Supergirl rhyming the whole time like a certain other special so I was down with that. Aside from her, there haven’t really been any poorly written heroes in the Lego specials. We’ve had some bad villains like Vandal Savage, but that’s all. I’d recommend checking this one out if you enjoyed the other DC specials. It’s fairly similar to them and follows a rather safe formula. It hits enough of the right notes to certainly be counted as a good film.