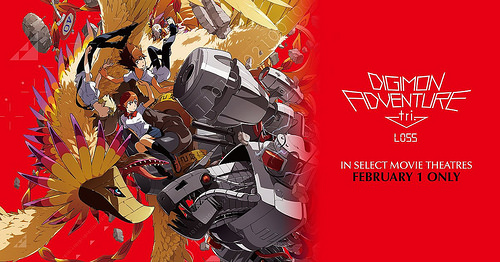 It’s time to look at the 4th film in the Digimon Tri series. This one finally has the gang head to the Digital World, but what does this mean for all of the ongoing plot lines so far? Well, they’re basically gonna get dropped for this film so we can focus on character introductions. This was a bit of a dicey call and I can certainly see how this would be the weakest installment yet. It basically just feels like filler for the most part and choosing to lead with a grainy low budget intro was…interesting to say the least. The scenes in the intro were interesting, but I wanted my high budget animation!

So the film starts off by showing us the school agent back when she was a kid. Apparently she had been one of the chosen ones (Or not chosen depending on how you interpret the speech) along with the teacher guy and she had to watch the elders appear for the first time as they sacrificed her friend to save the world. Well, now she has found a way to bring him back, the reboot! Meanwhile Tai and the others are in the Digital World, but their Digimon haven’t gotten their memories back as expected. It’s no big deal since they all get along…with the exception of Sora and her Digimon. Can they reconnect in the middle of this crisis? They better get their act together soon because Mega level Digimon are after them!

Sora is the main focus here as she goes through her personal dilemma. Was I on her side or not? Well, here’s the situation. The gang has arrived in the Digital World but their partners do not recognize them. The humans knew that beforehand but they held out hope that the Digimon would just remember somehow. Sora is no exception and since her Digimon wants nothing to do with her she takes it pretty hard.

I’d say that part of the problem on her end was that she was rushing the whole thing too much. You can’t expect to become friends with someone again over night like that. Granted, part of the reason why she got such expectations was because the others did the same thing so quickly. Naturally she gets a little jealous about the whole thing and since she is used to bottling her feelings up, Sora doesn’t do a great job of handling the situation. Naturally this is all leading up to the fact that I was not on her side. Not only should she not blame Tai and Matt at all, but her issue doesn’t even seem as big as the others. If she didn’t get emotional every time Biyumon yelled at her she would be in a far better position.

Now lets talk about more serious dilemmas. Unfortunately this is the first film to really get wonky when it comes to the power levels. It is quite noticeable even if you don’t usually focus on things like that. Gabumon is able to cancel out an energy blast from a Mega level Digimon despite being only a rookie. Then another rookie is able to stun the Mega. At that difference in power the attacks shouldn’t even be noticed. Rookies can rarely even damage champions, a mega is too much of a stretch.

This is definitely an issue that I would say falls with the writing. The film appeared to be trying to create a sense of danger and suspense for the heroes and figured that putting them in such a dangerous position was the way to go. That was not actually the case though because the writers went too far so when the heroes make a comeback or delay the inevitable like in those scenes it just doesn’t work. The film should have just not used a Mega right off the bat or the heroes should have kept their ultimates. That would have made a difference.

As far as the soundtrack goes, it’s only natural that this film could not top the last 3. That’s because this is the first installment not to feature the excellent danger theme that I always like to see. You can’t just cut out the best theme in the series like that. We also don’t have the techno intro but we have other insert songs at the ready here so it seemed like a fair trade. It’s still a reasonable soundtrack but one that is now missing a little impact. The animation continues to be consistent here. If you liked it in the first 3 parts then I don’t believe that this would change here. The fights are solid and the landscapes are on point. The character designs/animations may still be a little pale but as they don’t have their iconic costumes I suppose that it can’t be helped.

As far as Dark Jedi goes, the film does its best to make him as unlikable as possible. He goes through the trope of licking one of the heroes for shock value and to make sure you know that this guy is batty. So much for being the calm and collected mastermind right? The FBI agent is also going downhill fast as her final scene already negates her sob story. The other agent is certainly taking his time figuring this all out as well. I’m just ready for Alphamon to show up and start wrecking everyone again. Having the King of Digimon show up soon would also be a lot of fun.

Unfortunately this movie didn’t bode well for Meiko and Meicoomon either. Both of them panicked under pressure when the going got tough and made the villain’s job quite easy. The other Digidestined should also be blamed to an extent as they totally ditched her without any good reason. The whole point of the mission was to protect her and yet they left to go on their victory lap. Really? That also seemed very plot convenient. Also, the heroes had many chances to attack Dark Jedi (They even knew to call him Dark Jedi pretty quickly) but they kept just not doing so. At some point you have to step up and make an attack. Only Joe actually tried here and naturally it didn’t go well. I appreciated the attempt though. If the heroes had knocked him out that could have helped the situation quite a bit.

So while this film could have certainly be handled better, you’ve still got to give it credit for building a compelling story. The universe around the characters still feels nice and mysterious the whole time. The villains operate in the shadows so most of the residents in the world don’t even know what is happening. While certain scenes can be frustrating, at least you do care about what is going on. I’ll give a more thorough breakdown of the various plot lines and such in the final film so hopefully it is able to tie everything together.

Overall, This installment seemed to be buying for time to an extent. If you didn’t know any better you would almost assume that there was some kind of change in writers behind the scenes as the story definitely seems to be changing directions. That’s not a bad thing per say, but hopefully they do have an end goal in mind as I still have quite a few questions that need to be answered. Even if there may be some missed opportunities by the end of this series at least the plot is still engaging and I don’t expect that will change. Naturally if you saw the first 3 films then I’d recommend checking out this one. If you have not, then maybe you could jump on here and still enjoy the film as it’s a reasonable jumping on point but you will be missing some context which will make the scenes less emotional.

Gon has super speed that he can use to fight Loss. Loss may have been cool back in the day, but compared with Gon, she can’t make it. Gon’s just too strong to be beaten by the likes of her. Gon wins.