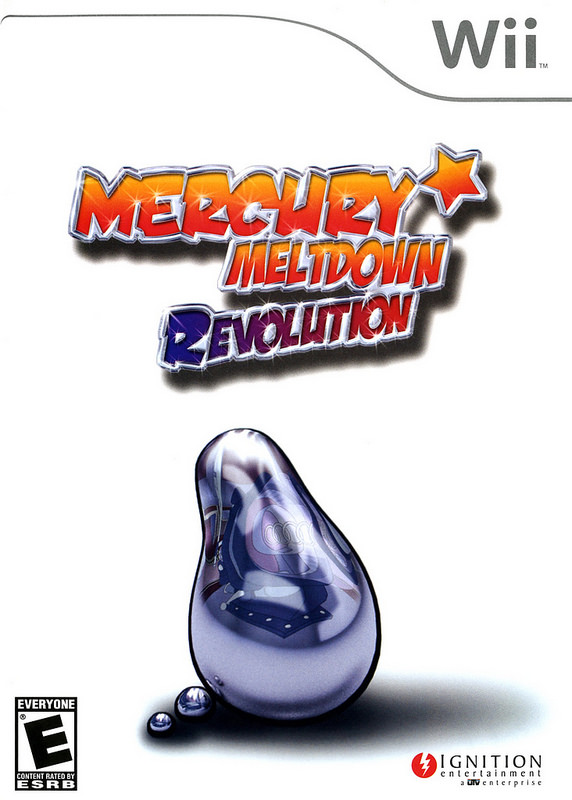 One can never get tired of playing these obscure Wii games eh? Mercury Meltdown Revolution is one of the many games that I bought a while back when Gamestops were emptying out their Wii inventory. The sheer amount of levels deterred me from starting this one for a while, but I decided to finally take the plunge. I didn’t play all 160+ levels, but I went as far as I could without grinding out some levels to get the final worlds. It’s a pretty fun puzzle game and it’s quite a bit better than most of the other Wii games that I’ve played. There are a few iffy levels and the controls aren’t explained too well, but this one’s a keeper.

The gameplay is fairly similar to Super Monkey Ball. You control a blob of Mercury and you have to get from the start to the finish. At first, the levels are fairly linear. You just have to use the Wii’s motion controls to get across. Later levels turn into intricate puzzles where you have to bump the mercury across a corner to split it and then navigate through the level along both paths simultaneously while not letting any of them fall. The levels continue to get tougher and tougher as you move along so expect to have to retry many levels multiple times. You need to pay close attention to the primary colors and subsets since some levels will only allow you to complete them as a certain level. Once in a while there will be levels where you can be dead without even knowing it. This happens when you turned into the wrong color or left your Mercury pal behind.

One thing that the game doesn’t mention is that a certain levitation button reverses your direction. I died over a dozen times trying to perform the fall just right without realizing that I was only falling due to the reverse. Trust me, it wasn’t a very happy situation. There is a lot of strategy in this game and much more so than Monkey Ball. Monkey Ball’s still better though because I prefer the physical skill aspect to be the big focus. This game is good for making you play patiently as you think about the options, but sometimes you just want to rush in there and start completing levels. You won’t be able to do that very much in this title.

Still, it’s definitely a pretty calm game. It’s something you can play to relax or to compete with a friend over who has the firmer hand when navigating the tougher turns. There is apparently a party mode since I unlocked party games several times. I didn’t actually check out the mode, but I’ll probably play it at some point in the future. It’s a good thing to have for the replay value although the game has quite a lot of that already as it is. Going back to each level and trying to complete them with more Mercury is a fun way of adding a challenge. I’m not crazy about it being tied to the rest of the worlds, but considering that there is no story mode anyway, it’s a little less annoying than it would be otherwise. You’ll also want to grab the stars that are scattered in all of the levels to unlock more party games.

The graphics are simple and to the point. They’re pretty bright so you don’t have to worry about straining your eyes to see what is happening The only area where the graphics are lacking a bit is that it can be hard to tell what color your Mercury is at times. Yellow, Aqua, and Silver all look almost identical. It’s pretty crazy since Yellow and Silver should never look that similar. Beyond that, the graphics are good. They aren’t great, but they’re certainly passable for this game.

Surprisingly, the soundtrack is actually pretty good at times. It is annoying how the same victory theme plays for each level though. You’ll get annoyed by it fairly quick as it isn’t even a good tune. Seeing the Mercury try to dance around can also be fairly disturbing. Get rid of the victory theme and the music would be just about perfect in this game.

One of the crucial parts that made the game good was the fact that the controls are actually very smooth and responsive. You will rarely die because the controls forced you over the edge. That is very crucial because the whole game is about testing your steadiness and reaction times. Bad controls would defeat the purpose and make the game unfair. It’s especially impressive since most Wii games are downright terrible when it comes to this area.

There is only one kind of level that I didn’t like in this game. Those are the escort missions. As always, escorting someone is pretty annoying. You’re trying to get a square of jelly to step on a switch for you, but he doesn’t like to listen to reason and gets in your way as often as possible. There was one level with a green jelly who could KO you in one hit if you bumped into him. That guy was also very unforgiving and my best advice is to simply stay away from him. No good will come out of those levels and they’re not worth the time sink. Stick to the standard levels.

Overall, Mercury Meltdown Revolution is a game that is easily worth the 2-4 dollars that you’ll spend to get it. Having over 160 levels is quite the feat and none of them are copies either. The levels all feel distinct and offer their own original challenges within. Each level is an experience while you may not want to try and beat too many levels in one shot, you won’t burn out too quickly if you do. If you like puzzle games a lot, then I recommend this one. It is certainly no Professor Layton, but these challenges will still have you scratching your head. It’s the kind of game that I’d never buy for the original retail price, but it’s a fun brain teaser.