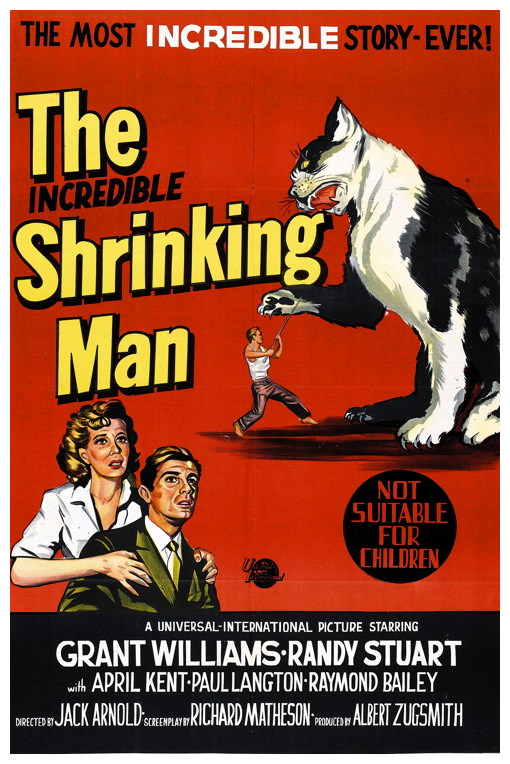 It’s time for a classic film that I’m sure everyone has heard of at some point or another. It’s a concept that is always fun to play around with as shrinking makes the world look even bigger. Honestly it’s not a super power that I would ever want to have because it just wouldn’t be as fun as the others. Being able to make snow would be far superior if you ask me and that’s something that I could get behind. Still, it’s not as if the lead asks for this ability in the film but he takes it so poorly that you have to wonder if this character was ever good to begin with. The film plays it off as if this ability slowly makes him grow worse and worse as a person, but really it just brought his true self out into the light.

So, the plot starts with Scott and his wife Louise on a boat. They are on vacation, but Scott is as annoying as always and just wants to get drunk on as many beers as he can handle. Vacation ruined, they prepare to head back home when a UFO whizzes past them and blasts Scott with a bunch of radioactive material. He shrugs it off, but gradually notices that he is getting shorter. At first everyone denies it and cites crazy theories that you just shrink by a noticeable amount during the day so it’s all legit. After this is impossible to deny, the doctors work around the clock to create a cure while Scott decides to take out his frustration out on Louise. Will she trap him in a jar so that he can’t hurt anyone anymore or will the scientists have to give him a fake antidote to buy some time? A lot of tough decisions are on the table.

The premise has potential even if it’s not a whole lot of potential. It could be a reasonably fun comedy like Honey I Shrunk The Kids or something. Instead, this film decides to play it straight and is so serious that it is borderline grim at times. Scott becomes such a villain in the film that he yells at his wife, stabs the cat, and even destroys a spider. If I said he was beyond redemption at this point it would be an understatement. I couldn’t stand his character by the end and he already showed signs of being bad from the start with how he ordered Louise to get him a beer. When she denied this he played it off as a joke but this guy is definitely a bad apple. Did I mention how he also starts getting ready to cheat on Louise with someone from the circus but his plans are dashed when he shrinks again? That’s just the kind of guy he is and it’s unfortunate since Louise is such a good, loyal person. She definitely deserved better than what she got in this film.

Naturally none of these scenes are any fun to watch. Scott is basically acting like a bully only there isn’t anyone around to notice and call him out on it. Louise decides to just take it because she hopes he will be better soon. Although in my head canon I like to think that she purposefully let the cat inside and then shut the door to teach Scott a lesson. I was rooting for the cat by the way. Fortunately the cat doesn’t die or get seriously injured but the film was definitely stressful for those scenes. Still, Scott later murders the spider in graphic detail which sent the film that had already jumped over the shark all the way over the cliff. It was game over. Game Set and Match. There was just no hope left for it. Mixing in animal violence is always a way to sour any recipe and this film is no exception.

There just isn’t anything good about this film. Scott and Louise are basically the only two characters in the film. It feels rather low budget which would explain the small cast. Scott’s brother (in law? I forgot if they mentioned this or not) shows up once or twice to point out that Scott is acting petty and he should try getting some money for this. Scott denies because he just wants to see the world burn and in exchange the brother almost steps on him a few times by the end. The human interactions in these old films are usually the good parts, but it’s just hard to enjoy them. This is what a bad main character can do. He can wreck the rest of the movie just on account of how insufferable he is.

The only positive thing I can say about the film is the ending. Granted, it’s because the ending has Scott get destroyed by his own ego as he shrinks away into nothingness, but I’ll accept that. Scott couldn’t be left alive by the end of the film. A life taken is a life lost after all so since he took down the spider I’m glad that the universe placed the scales back in order. We can’t let reckless villains like Scott do whatever they want. I have higher hopes for another installment in the franchise since Scott would no longer be around.

What another film should play up more is the media angle. I want to see how the rest of the world handles this. There’s a lot of potential there as there always is when something supernatural happens in an otherwise ordinary world. I’d also like to see the main character get adjusted to his new situation and make the best of it. Moping for a little can be all right, but there has to come a time where you just make the best of it. Make a film like that and it could actually end up being quality confirmed. This goes without saying, but no animal violence either of course.

Overall, in case you didn’t guess, I didn’t like Scott. He’s absolutely terrible and the same can be said for this film. He just makes every scene around him worse and I already said that so lets keep it moving. The animal violence didn’t help matters and you’ll just struggle to get through this movie. I highly recommend staying far away from this film. The only thing it’s good at is winning Razzi awards and as much as I would like to vote for this one, I probably couldn’t depending on what the competition is. Either way, if you want a film about someone who shrinks, check out Ant Man. I wasn’t the biggest fan of that movie either, but it’s still considerably better than this one.