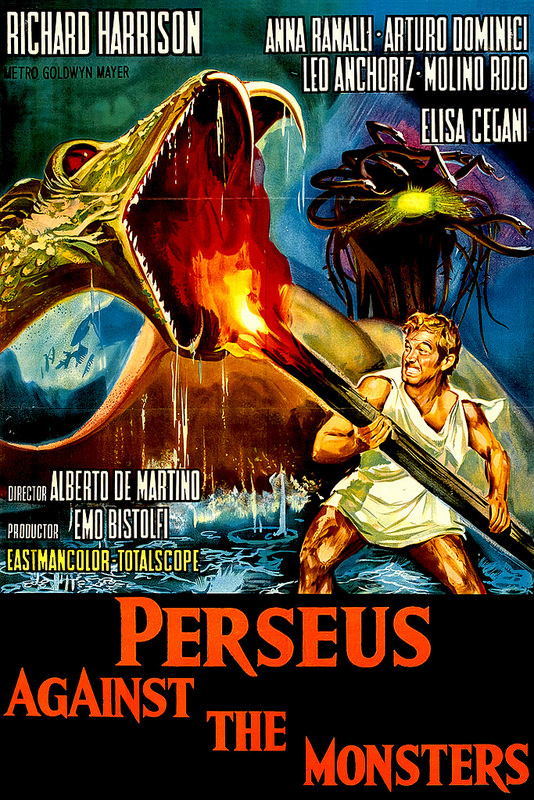 It’s time for a really old film that basically nobody remembers at this point. It’s just very obscure and it’s easy to see why since it’s pretty low budget and feels kind of random. The good news about this is that the film can basically do whatever it wants because it’s not like there were any expectations for it. The film’s pretty fun and has some nice monster designs. I wasn’t sure if it would be able to stay the course for the whole film and cross the line into boring territory but it stayed entertaining throughout.

The character names are a little tricky, but I know the important ones. Perseo is just an ordinary guy living in the poor slums of the world. He doesn’t know that he is actually the son of Hercules so I’m assuming that as a baby he got lost or was banished for some reason. Either way, he’s content since the princess (He doesn’t know that she is royalty) comes to visit him every day but never tells him that her name. He vows to catch her one day before she escapes him. The problem is that Andromeda has an arranged marriage to Galenore in order to stop an impending war. Galenore and Perseo meet which ends up with Perseo getting humiliated in combat. He will get one chance to redeem himself as Andromeda saves him by initiating a tournament. The winner claims Andromeda so the stakes are high. Can Perseo win?

This is one of those films with a ton of different climaxes. There are many times you’ll think the film is about to end when it just keeps on going. I’d say that this is a good thing for the most part since it means that the film keeps up a very fast tempo. I’d expect nothing less. It’s old but the effects are actually pretty good for its time. Case in point, the monsters. There are two main monsters here. The first one is a Sea Serpent who picks off anyone who gets too close to the water. Fortunately for the serpent, everyone runs to the water and even the villain trips inside it towards the end for plot convenience. I liked his design and this monster was not to be trifled with. Nobody could stop him.

Then we have the Medusa. It’s a living Tornado with an evil eye that turns everyone into stone. It claims a lot of victims during the very first scene but sadly only appears once or twice after that. It’s definitely another strong opponent and this may be my personal favorite Medusa design. At the very least you have to admit that it’s very original and unexpected. Since the Medusa is even in the title, you want it to go down with a little dignity. It certainly had a lot more than the human villains.

Galenore is the main antagonist and he talks a good game while he’s winning. Once he suffers his first defeat, he quickly becomes afraid of his Perseo. He basically cowers behind his father from this point on and only fights when his opponent is at a disadvantage. Naturally I’m not a fan since his only motivation is basically that he wants to marry Andromeda. You can probably see why he’s not my kind of villain from that scene alone. His whip skills were fairly solid I suppose, buit I definitely don’t consider it t be one of the better weapons out there. Give me a sword any day.

Andromeda was an okay heroine. She had bow and arrow skills which is more than I can say for most. I would have been happier if she had used them more during the film though as opposed to getting knocked out with ease. Granted she was in her room in the palace so you’d think that nobody would break in, but the guards were all dispatched in an instant. Honestly the security was pretty terrible. Going against the arranged marriage was good and all, but she could have been more direct with Perseo. The romance was pretty weak throughout though so I’m glad it was given a relatively small presence. I saw the comedy version on Svengoolie with the extra sound effects and I can certainly say that they did at least make all of the scenes a lot funnier. Enough that I’d possibly give it an extra star as most of the additions were pretty well placed and also made Andromeda a better character.

To round out the main cast, I can’t say that I like Perseo all that much either. He just seems a little desperate for Andromeda and yet he still gets completely wrecked in his first fight. I was expecting him to put forth a little more effort to be honest. It was just sad how he lost and even in the rematch he was not faring well for a while until Galenore got overconfident and went too close. It was interesting to see him suddenly become the head of the army and break into the villain base though. It was a pretty big shift in stature in just the span of a few minutes. The King of the heroes wasn’t even that grateful the whole time as he forced Perseo to get in the army. Then we got a plot twist about where Perseo truly belonged which was at least mentioned in the beginning so there was some foreshadowing. I felt bad for the Mom since it took ages for Perseo to arrive. I believe she ended up dying rather tragically as well but I don’t remember the specifics.

It would have been nice if Perseo’s army was a little stronger though. The difference in power was crazy and how did the villains get those overpowered monsters? The heroes losing everyone to the Medusa was also pretty suspect since you’d expect at least a few to throw some arrows or sword stabs into the tornado while it was busy freezing others. Of course, given their lack of teamwork and how they got picked off by random guys the whole time, I suppose it is to be expected.

Overall, This was a pretty fun film. It’s certainly not amazing or anything, but it’s surprisingly a pretty solid experience. Something is always happening and the film never got too fishy with Galenor’s obsession with Andromeda. Perseo was always ready to break things up. The action scenes are entertaining and this just makes for a really good light hearted action film. It’s certainly not serious and it’s not even self aware but you’d be surprised at what you can do with a limited budget. This film was clearly ready for it and I’d certainly be up to seeing more films in this series. I’d recommend checking it out but don’t expect the monsters to get a huge role. At the end of the day, it’s just a story of the hero trying to save the Princess from the villains.