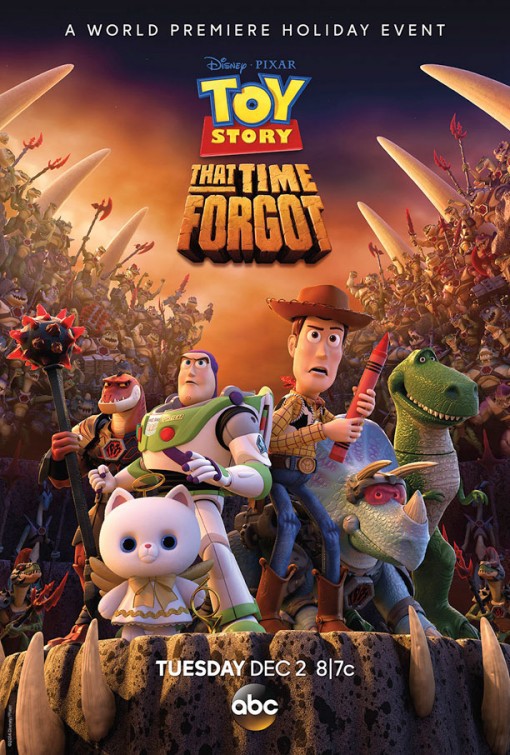 Toy Story has had a good run of animated shorts and movies so far but now it’s time to see if this latest one holds up. This time the heroes have to do battle with some wild toys and the fact that we got some actual action scenes here is quite impressive. The short is held back by a romance subplot which will make you cringe a bit but once you get past that, the rest of the special is on point. It’s a fun little adventure and you should breeze through it.

The story starts with Bonnie being invited to her friend’s place to hang out. When she gets there, she finds out that he has gotten addicted to video games and he quickly gets her on them as well. She tosses her toys aside to have fun here but Woody and friends quickly find out that this place isn’t a very nice area. The Battle Dinosaurs don’t realize that they are actually toys much like Buzz from the first film and so they’ve built a violent arena where they take toys down for the count. The heroes have a dinosaur of their own in Trixie but will she be able to stop these guys?

The standout character as always is Buzz here with how he is quick to fight back and actually does well against the villain. Unfortunately Woody isn’t quite as skilled and ends up holding them back. I was still just surprised at how we had a real action sequence so that was just a lot of fun. It also added to the sense of danger that was present during the special. These dinosaurs were not holding anything back and lived up to their name as the Battlesaurs.

The main fighter on their side was Maximus and he gets a solid role here. He has completely bought into the whole arena atmosphere and seems to have been winning every match for a while now. I doubt any of the heroes could beat him in a straight fight which is why they ultimately need to go for a more emotional approach and to bring in outside help. He’s good as an antagonist but as a hero he can be extremely cheesy. He goes a bit over the top with the whole romance with Trixie.

As mentioned earlier, that’s my main issue with this. The romance isn’t handled well and feels like something out of Scooby Doo. These dinosaurs just met each other and the dialogue is very stilted. Keeping that out of the special would have been a really good idea if you ask me. It’s the only weak point of the special. It also doesn’t let Trixie really get to show her stuff as the lead because this plot is slowing her down. She’s very oblivious to everything during the whole special but in her defense, everyone seems rather oblivious the whole time.

As for the villain mastermind: Cleric. Well he serves his purpose well enough. The guy wants to build his evil empire and has done a really good job of it. He’s hidden the signs that would cause his followers to lose trust in him and has built a rather solid atmosphere for himself all things considered. Considering that the kid could show up at any time and ruin things, the Cleric really showed a lot of guts with this plan. Finally you have Angel Kitty as the mysterious new character here to drop some wisdom on the other toys. She was a fun enough character even if her gimmick gets old a little quickly. One note characters will always need a little something extra to stay interesting so if she ever appears again they’ll probably need to do something more with her.

Not surprisingly, the animation here is as good as ever. You couldn’t really put a big difference between the special and the full movies. Not to say that there is no difference, but it’s close enough where you’re pleased with how the special looks. There isn’t much of a soundtrack to be found here which is too bad but maybe they can squeeze one in next time. A really solid rock theme for the battles is a good opportunity for some music after all. Aside from the romance the writing is on point as well so on a technical level the special is sound. Throw in that I liked the idea of the Battlesaurs and you can see why this is a win.

Overall, That Time Forgot is a bit of an odd title. I feel like it should be “The toys that time forgot” or something like that. As it is, the title just doesn’t feel grammatically correct. Still, it’s a fun special and one that does justice to the Toy Story brand. You’ll have a good time here even as the film feels like it’s over just when it has begun. You could easily make a whole 2 hour film for this premise since Bonnie would probably be playing video games for that long and you could have the toys move their way through the arena by winning some battles. A lot of potential there for sure. Well, we’ll see what Toy Story short comes up next.

Well, the Mega specials continue here as Alain carries on in his journey to defeat all of the Mega evolved Pokemon. Unfortunately, this is a goal that is even more difficult than Ash’s dream of being a Pokemon Master so it shall never happen. Still, Alain can just try to defeat all of the Mega Pokemon that he encounters. That would be a nice start to his goal. This special is pretty good, but it’s not quite as engaging as the first special. There simply isn’t as much action to be found here.

Alain was looking for more people to fight when his sidekick ended up falling down only to be helped up by the Pokemon Champion, Steven. Alain quickly challenges Steven to a fight that the champion cannot refuse and Alain’s big fight is here. His Charizard is powerful, but he’s up against a champion right now so you can bet that it won’t be an easy fight. That’s the meat of the episode and after that the heroes use some ruins that they have found to locate a large energy source. It could be the ultimate Mega Stone…let’s hope that it doesn’t fall into the wrong hands!

Speaking of which, Lysandre has a pretty big role in the special. There will be no drama for the kids who played Pokemon X/Y, but for those of you who do not play the games, you’ll still realize that something is fishy with this guy. I didn’t care for him anyway as Lysandre interrupted a good fight and he seems a little condescending. His hairstyle is pretty good though since it stands out. Hopefully Alain turns against him quickly and uses his good ole Charizard to take his boss down!

Steven is a pretty likable character and you can tell that his skills are worthy of being a Pokemon Master. I don’t like the fact that his Metagross is not blue, but I suppose that making it a shiny version makes the kid look even more impressive. Suffice to say, I was rooting for Alain, but it definitely makes sense that he was being crushed in the fight. One simply does not defeat a Pokemon Champion and especially someone with Alain’s track record. See, Alain talks a good game, but he has a habit of losing when the going gets tough.

Alain’s goal is to defeat all of the Mega Pokemon, but he’s already been defeated twice if I recall correctly and he suffered a tie that would have been a loss in this special as well. Alain is a nice guy and he’s finally getting used to the power of friendship, but he’s still going to have to improve his fighting skills if he wants to stay relevant in the Pokemon world. He’s definitely no Ash Ketchum, but he’s a cool lead.

I still can’t wait until the anime starts to use Mega Evolutions more as it is certainly a good step in the Pokemon universe. Imagine seeing Pikachu having a Mega Stone and gradually mastering his new form as the series goes on! It would add a Shonen Twist to keep Pokemon going and the visuals are always great once that happens. The Mega energy that envelops the Pokemon and causes many cool destruction scenes is something that we need to see more of.

The animation is naturally very good for this special. The fight scenes are a lot of fun to watch and the energy attacks all have a lot of detail. The character designs are easy to look at and it’s a win all around. Pokemon definitely proves that it can still hold up with the best mon shows. Unfortunately, the soundtrack is another story. It wrecks the tension and excitement that the fights have because the music is so slow and happy. It’s simply not well suited to accompany these action scenes and I have to wonder what the channel was thinking. Throw in some rock themes from GX or rip some music from Pokemon Advanced, but just about anything would have been an improvement over what we got. Music is a key ingredient in anything and especially an anime so they need to get that fixed before act III comes out.

Unfortunately, this special is still really short and it’s basically equivalent to watching a normal episode of Pokemon. To an extent, it does feel like a normal episode and you would probably just call this filler if it was occurring alongside Ash’s adventures. That would have actually been interesting, but this way is better since we get to have both. Hopefully this series gets many acts although I hope that they make it bi weekly or at least monthly soon since the wait can be pretty bad. It will certainly help with the pacing since nothing really happened in this episode, but it wouldn’t feel as bad if we had the next one coming in a few weeks.

Overall, Act II may not be as intense as Act I, but it’s still a pretty fun Pokemon special. It’s really everything that you would expect from the classic franchise as we get some cool action scenes and some world building for the future. It’s almost inevitable that Alain will have to fight his boss so that should be a pretty intense fight. I hope that we get to see some more game characters like Red and Blue as the special series goes on. The most important thing is for the specials to fix the soundtrack. That negative really needs to be addressed before the third Act arrives since it really limits the special’s potential. It’s only about 20 minutes so I’ll expect all of my blog followers to give it a shot by then unless you plan to watch all of the acts as a film once they end. Otherwise, see you then!