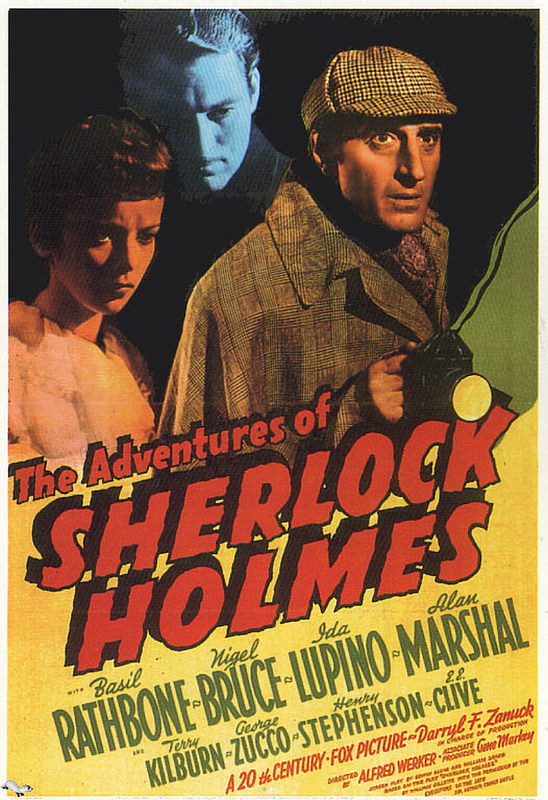 It’s time to take a look at another Sherlock Holmes title. This one brings in his arch nemesis Moriarty to match wits against. It’s a very solid mystery film where we actually see Holmes on the losing side for once. It’s rare to see him have trouble intellectually against an opponent but that actually turned out to be the case here. With two main cases to deal with here, there is plenty to keep you busy.

The film starts with Holmes finally solving the secret to Moriarty’s alibi but he arrives too late to testify in court and the villain gets away. Moriarty then decides to commit another crime and aims to use his innate knowledge of how Holmes operates to pull it off. The first case for Holmes is that someone appears to be trying to murder various members of one of the families. The lady asks for Holmes’ help and he eagerly helps as he figures Moriarty’s hand is at work here. Meanwhile someone is after one of the largest gems in all of England. This case bores Holmes so he decides to send Watson in his place. Can Holmes solve the true meaning behind these crimes?

It’s always a bold move in any form of media for a villain to explain the whole plan at the beginning. Typically you assume that the plan won’t work then or that he is leaving a lot out which will make for shocking plot twists at the end. That’s why it is actually surprising when the plan goes without a hitch. Moriarty’s goal was to get Holmes to pay attention to the 2nd case by making it sound more dangerous and it worked completely. The only reason the plan didn’t finish 100% is simply because the villain took too long at the end. A big part of the rivalry between Holmes and Moriarty is how they know each other so well and they can predict each other’s movements that way. Holmes was rather confident in how he could predict Moriarty’s actions so maybe that was his downfall. Of course, Holmes was also stuck being reactive while Moriarty was proactive and the latter always gets the advantage as well.

Just because he lost doesn’t mean Holmes looked bad though. His disguise was on point once again in this film and he is a fun character to have around. He isn’t afraid to point out how smart he is and insults Watson for not living up to this rather high bar. His violin is also a solid hobby to have on hand. I didn’t quite buy into the look of surprise Holmes had on his face when he punched someone off a building though. He clearly knew what would happen as a result of that and it’s not like it happened too quickly to react to either. He just wanted to get the win.

I also have to go off on a quick tangent to say just how interesting it is to see Sherlock live in a rather public place. Everyone knows where he lives so a villain could pop in and try to destroy him at any time. I suppose just like how Holmes has a tight grip on the police, Moriarty may have influence on the mobsters which prevents them from trying such a tactic. Usually the great minds have to be a little more discreet, but not Mr. Holmes. I guess that’s another plus about either bumping off all of his opponents or arresting them. They won’t be able to enact any kind of revenge in the near future.

Watson is a fun sidekick as always. While he may not be as smart as Holmes at least he always tries hard. He is conventionally smart which means that he will find the obvious answers to each question which are the ones that the villains want him to find. Honestly he can’t really be blamed for the police scene either since the cops should have known about that or Holmes should have had a way to make sure they were authentic. It was sad for Watson when a kid was proving to be his match in wit though. He certainly beats his evil counterpart as Watson will talk back to Holmes while the other guy does not. It’s certainly an interesting parallel though.

Then we also can’t forget Moriarty. He is definitely a very memorable character so it’s almost a shame that he might be written out so soon. It’s nice to have someone who can actually keep up with Holmes and I could see him acting as a rival in future films if he ever had a common enemy along with Sherlock. His plan is solid and he also knows how to fight so he is definitely a complete villain. We also get to meet the Police Chief here which was fun. I always like his character type because the guy comes in with such confidence whether he is right or wrong. Throw in the fact that Sherlock is looking out for him and this guy’s career is certainly set.

I haven’t spoken much about the actual cases. There isn’t much to say about the diamond as it barely appears until the end. I definitely agree with the police chief’s disappointment since Sherlock promised multiple times that he would show up, but ultimately sent Watson instead. The other case is the main one as we have several suspects and a lot happening the whole time. I will say that the main heroine’s fiancee was particularly bad though and I don’t think she should have forgiven him so easily. The whole movie he knows that someone is targeting her brother but still goes out of his way to convince them all that it’s just a prank. He tries to prevent Sherlock Holmes from getting involved (To no avail) and just comes off as a villain. Despite his half hearted protest that he was trying to protect Lloyd on his own, he certainly did a poor job of it. He should have walked with Lloyd to the house or stayed inside since the villain wouldn’t be able to commit the murder once the day was up. All of the characters who are being targeted play their parts rather terribly as they fall into every possible trap. 5 minutes left til midnight? Perfect time to run into the forest all alone! The characters do this sort of thing quite a lot and definitely make the situation harder for Sherlock Holmes.

Overall, This was definitely a very solid mystery. You’ll be engaged all the way through. Even if the main mystery is a diversion and you the viewer are aware of this, you’ll still be able to enjoy it. You’ll probably be shaking your head at some of the decisions that are made, but the scenes are still delivered with good writing. The dialogue is really what makes this film. For a mystery film it is especially important and this will be a tough Holmes film to beat, but there are plenty of other installments left so I’m sure we’ll have quite a few contenders by the end. If you haven’t seen this film yet then I definitely recommend checking it out!