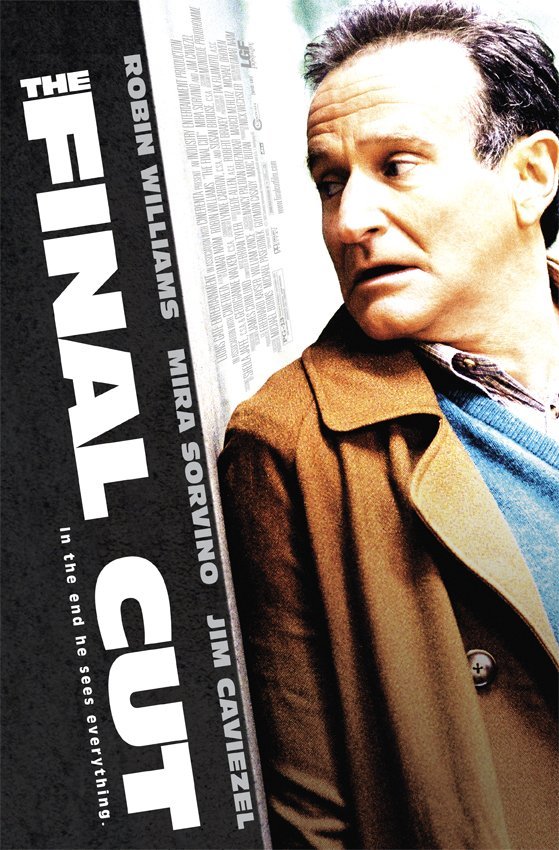 The Final Cut is a sci-fi film with a pretty interesting idea. It definitely raises some interesting discussion points about the idea of having something that can record your every moment. Unfortunately the movie doesn’t take much time to think about this. The film feels very short which can be seen as a good thing but at the same time it means there isn’t a lot of room to explore anything. At times the film feels rather aimless and never completes any of the more interesting questions it touches on.

The movie starts by introducing us to a new concept that has happened in the universe. There’s now a chip you can implant in yourself which records everything you see and say. When you die, a relative can then send your video file to a cutter who is effectively someone who looks through that data and makes a movie out of it. They then play this at your funeral or “Rememory” as they call it. Alan is known as the best in the biz because he’ll take on the memories of the worst people around and edit the film so much that they appear to be good people. His latest case is another tricky one since he has to clean up an evil guy’s act but then he recognizes a person in the memories. It appears to be someone who died back when Alan was a kid. He’s now determined to find out the truth but meanwhile the people taking a stand against the chip are determined to do whatever it takes.

To start off, the idea of implanting a chip that records what you see doesn’t sound too far off. It seems feasible that this could happen, but I would certainly be on the resistance side. There’s a whole lot of risk with putting anything in your body, especially something that’s around where your brain is. If it short-circuits in your head or you hit your head very hard, what will happen to the chip? It can easily fry your brain or do something else. That’s already reason enough for why you’d never want that kind of thing to be legal. Chipping is just a bad idea for any life forms.

Then you have the whole privacy issue. After all, even if the person using the chip has granted their permission for this to happen, what about all of the people who will inevitably get filmed over the course of that person’s life? Effectively nothing will be private since the cutter is granted free reign over every single memory. Additionally the future audience will also get to see the moments that make the final cut. There are just a lot of reasons why this is a bad idea and of course to maximize its effects we learn in the movie that a lot of people have it plugged into their kids when they are born so there was never even a choice for consent.

The movie tackles both of these themes a bit as there is a whole resistance force against this. The matter even went to court apparently. Alan’s character can’t be bothered with this though so he always runs off when the debate is starting. Alan is completely fine with this until he remembers the skeletons in his closet so then it’s time to dash again. It’s definitely one of those things that you can picture since people are often okay with things until it happens to them. Alan’s definitely not a likable character in the slightest though. His friends are right that his job as a Cutter is just not very savory or even ethical. He’s really just rewriting the past for various characters to try and make them look better. That isn’t good. You can make a case for his being an accomplice by not saying anything.

Naturally the film makes sure to go all the way for this so during the film we see how characters do a lot of awful things that Alan wipes out from the film during the cutting process. The film goes way too far in this area which definitely doomed the movie. You could definitely have established the context of why people are against the implant without having to go into this detail. It shows that the film was not super confident in what explaining its own premise. The worst part is still that we don’t really get to debate the idea either. Alan never really defends his position of why he helps beyond half hearted generalities.

It’s just another reason why he wasn’t a fun lead to follow. Then you have Fletcher who is effectively the main villain here. He wants the tape that Alan is working on so he can prove that this guy was no good from the start. Naturally the proof in this tape would be quite incriminating but Alan is determined not to hand it over because of the Cutter’s Code that he agreed to. Fletcher makes for a much more interesting character than Alan so it would have been interesting to see more of him. I will say that the ending was pretty unexpected with how things played out. I’ll give the film credit on that one.

Then there’s the main heroine Delila but she doesn’t appear all that much so it may be a bit of an overstatement to call her the main heroine. By the start of the film things are already rocky between her and Alan. That said, it still seemed like a bit of an overreaction on her part later on when she’s watching the videos. She clearly knew what his job was so this was the kind of thing he would be doing constantly. It was more personal since it was videos of her of course, but it’s not like that should change the context of what he was doing. I suppose her solution to this was quite permanent but at the same time she could have probably been sued for a ton of money so it was a pretty big risk.

The Final Cut has some interesting ideas and takes place in a unique setting but it’s far too short. We don’t really get to see much of the rebellion itself, the company’s reaction, government, etc. It feels like we’re seeing a very small corner of the world and unfortunately not a very interesting corner. The film relies too much on shock value from the scenes on the videos and is more interested in doing that than actually having Alan have some real conversations about his job. That would have made for a much more interesting film as well as some good debates. If he and Fletcher could have a proper discussion about this without either one constantly dodging questions then that could have been good.

Overall, The Final Cut is a pretty bad film. Alan’s just a poor main character and the fact that I couldn’t agree with any of his decisions and motivations did not help matters. All the videos he would watch tended to be more on the disturbing side. I like the idea of showing a world where this is possible but it wasn’t used properly. In the real world I’d definitely be against any kind of implants like that though. Seems like something that will create a whole lot more harm than good. Maybe someday someone will take another crack at the premise.