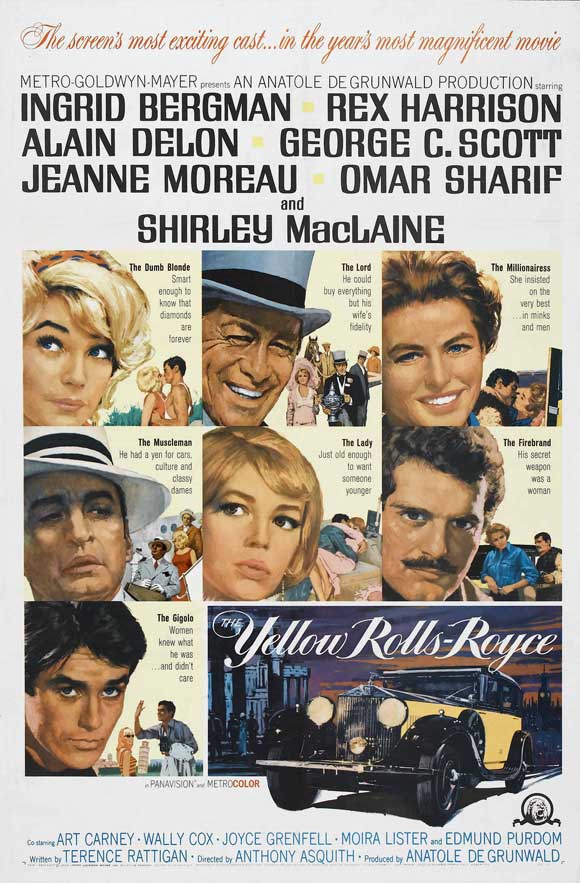 Time for another anthology type film. The Rolls-Royce is a pretty interesting car to see and I can see why the brand was so well known back in the day. Personally I can’t imagine spending too much of a premium for a car though. Cars are already an outrageous price so to go even higher just for design? Maybe if the car could make me my morning Pepsi or something but otherwise no dice. Still, it makes for a fun little car to connect the 3 stories together. There is a whole lot of deception and cheating going around in these films so you really can’t trust anybody.

The first story picks up with Charles heading to the dealership to pick up his car. It’s a Yellow Rolls-Royce that even has a phone in it. Everything’s not quite how he wanted it installed but he needs it today and can’t fuss over it further. See, he had forgotten his anniversary (pretty big thing to forget to be honest) Still, he figures better late than never and heads on home to a big party. The Gold Cup is happening the next day which is a huge horse race that he looks forward to every year. He tends to win it every year but it never loses that feeling of excitement and splendor. Still, his wife Eloise is acting a bit odd. Charles doesn’t want to read into it but people are definitely giving him ideas. Particularly one lady who certainly doesn’t like Eloise and basically tells Charles that Eloise is cheating on him. He can prove that she isn’t pretty easily by checking on his Rolls-Royce. The thing is, checking the car would mean that he didn’t trust her. So the instant he heads for the car the relationship will never be the same but at the same time he has to know. What is he to do?

The film doesn’t keep it a secret that she is cheating on him from the start. This isn’t a mystery or a thriller. It’s really just about showing how betrayal can hurt quite a lot. At that point there isn’t much Charles can do. He’s tied up socially although I think that’s no excuse. Are you really able to just keep going on like everything’s normal? I feel like that’s not a good strategy because now either he’ll just go on knowing that she is probably having affairs with other people or he’ll do the same thing as revenge. Either way I don’t think he’ll be able to get excited for the Gold Cup anymore.

This was a pretty strong way to start the film. It’s easily the most emotional special. While you can’t say Charles is a great guy (He routinely ignores an ambassador who is trying to convey urgent information because he doesn’t want to deal with it) he at least seemed like a nice one. He definitely takes this hard and who wouldn’t. Eloise definitely looks really bad here. Cheating is definitely never a good idea and it’s really impossible to sympathize with her plight here. She half heartedly almost decides not to cheat but quickly goes through with it anyway. At that point she certainly made her choice.

Next up is a story about a gangster named Paolo and his gal pal Mae. He is trying to show her all the best sights in Italy and Rome but to his great annoyance she is really not impressed with any of them. In fact, they bore her completely and she wants to leave. Paolo is determined to get her to change her mind but ends up having to leave on business. See, he’s part of the mafia and from time to time he is called in to erase people. He leaves Mae with his most trusted ally Joey. Joey does his best to look after her but Mae quickly begins to like a local guy named Stefano. Stefano is a guy who flirts with everyone and admits this quite openly. He’s had more affairs than he can count but assures Mae this is the real deal this time. They have an affair but then learn that Paolo is coming back. It goes without saying that he’ll murder Stefano if he catches the guy with Mae. What can she do to save his life and prevent such a catastrophe?

Well, this is another story about cheating so I can’t say I feel bad for Mae or Stefano. Keep in mind that the person cheating is just as guilty as the single person who convinces the person in a relationship to get together. Now, in this case we have the mafia angle so you could make the case that Mae doesn’t even like Paolo and isn’t truly in a relationship. I’m not really sure that one would hold weight in this case. At the very least the secretive nature of the whole thing isn’t great and if she was serious about this she should escape with Stefano right away. I have no doubts that Paolo would track them down eventually though so then the best thing to do would be to not have the affair at the start. It would be the best way out.

Joey was definitely a really solid friend here. He maybe looked the other way too much but he did his best to keep Mae safe. Even if it meant keeping Paolo in the dark he succeeded in his mission. Paolo told him to keep Mae safe and that’s exactly what he did. Meanwhile Paolo made for a pretty fun figure. You could never really know what he was thinking. I suspect he knew more than he was letting on at the end of the film but chose to look away just this once. Perhaps he had more mercy than I would have suspected.

Finally we go to a story that actually has a war in it so there’s some high stakes here. Gerda has bought the Rolls-Royce as she prepares to travel around Europe. People keep trying to warn her that a war is breaking out but she refuses to hear it. Sensing that Gerda may be someone easy to manipulate we are introduced to a guy named Davich who claims he is a hero who will help end the war. When Gerda doesn’t really understand what this means he gives up the subtle act and just holds her at gun point to help him out. She begins the journey but is she actually bringing along someone who is very dangerous and will jeapordize the war?

This story definitely didn’t go quite how I thought it would. See, I was convinced that Davich was a bad guy. That he would turn out to be a Nazi or something as he showed his true colors. Instead his story was actually on the level and he was hear to helo the rebels win the war against the Nazi’s. It takes an incredibly long time for Gerda to get on board with this though. At one point she even starts eating a meal while bombs are flying in the distance and she couldn’t be bothered. It was a pretty surreal scene and I wasn’t sure if it was being played seriously there or if it was supposed to be a comedic moment.

The special has a lot of different vibes throughout for sure. One thing the special didn’t manage to do was make Davich likable though. I don’t care how undercover he was, he threatened to murder Gerda’s dog which was pretty crazy. There was no way I could possibly root for him after that. He just seems a little too willing to do anything to help out even if it means becoming a villain himself. Even his ending is a bit suspect as he absolutely refuses help even if it would have been very helpful at that moment. I already talked about Gerda, she isn’t very good either. She’s just too slow on the uptake the whole time and would very quickly turn on her dog at times. The final special definitely suffered from a weaker cast than the first two stories.

Overall, The Yellow Rolls-Royce is an interesting anthology. All of the shorts are pretty solid. It’s definitely one of the more emotional ones as the first two shorts have sad endings and the final one has a happy ending but with somber undertones as there were significant casualties. It is good that the main heroine there was quite skilled once she realized the danger was real and quickly pitched in to help. Imagine if she had been that heroic the whole time. While the movie can be quite somber I wouldn’t say it’s ever too down in the dumps. I would describe it as the film never letting you get too excited and content because you know things are going to turn but you have a good time in the meanwhile. The first special definitely handles this the best I’d say in part because the betrayal just feels the most personal and the film succeeds in making you feel bad for the main guy even though he wasn’t portrayed to be very heroic. I’d recommend checking this out if you want a good collection of dramas.