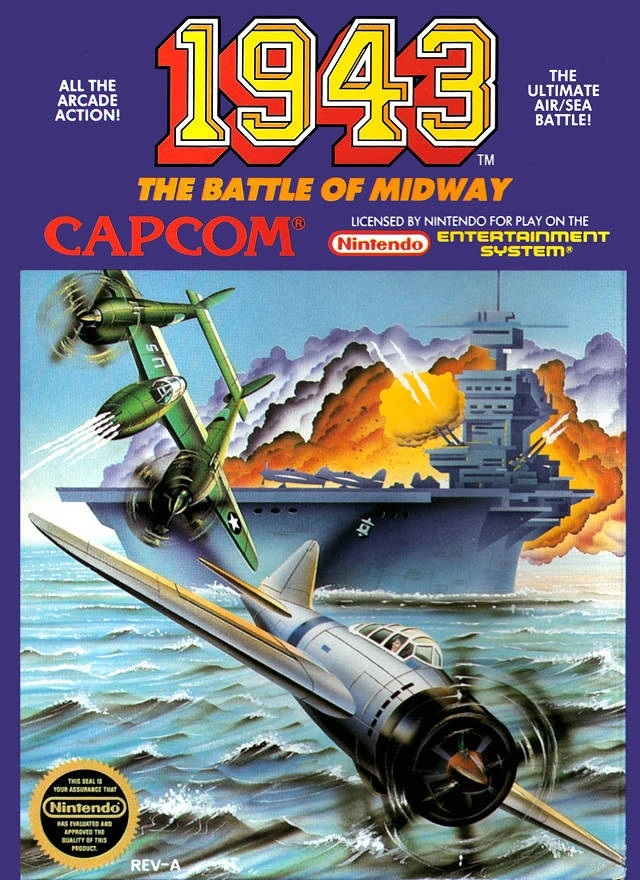 1943 is a rather basic airplane type game. There may be a plot but you wouldn’t really know it from playing the game. I don’t tend to count booklet plots all that much. So you have to enjoy the gameplay as that’s really the focus of this game. I wasn’t particularly impressed with any one element but the game itself is solid enough. It’s a game built on its fundamentals and there are quite a few weapons and mechanics to learn. Ultimately they may not stand out but this is a really difficult game so good luck trying to beat it without using any of the advanced features like rewinding and such. This one is going to take all of your abilities to get through to the end.

The main gameplay here is an overhead style as you watch your plane go forward and land major damage. You are attacked by all kinds of ships and other enemies as they overload the screen. Your task is to take them out as they come through and survive until the end. Typically there will be a boss at the end although not every level has one. Sometimes you will just keep on going until the level ends.

Now when I said the game was tough, I definitely meant it all the way. A few hits can take your plane down for the count. Additionally your plane keeps changing weapons when you touch the power ups. Some are better than others so avoid these when you have one that you like. On the other hand, you can shoot a power up to turn it into a health item but you have to do that carefully. Shoot too much and it’ll be a power up item again, shoot too little and the same thing could happen. It’s all a battle of reaction times and you have to make sure that you are on point the whole time.

You’ve also got some kind of bomb/thunderstrike ability. This is really handy as it affects the whole screen but surprisingly it won’t necessarily defeat all of the minions that it hits. It’s strong but not a one hit KO move the way that most of these attacks tend to be. I was certainly surprised when some of the villains endured the attack. I guess it helps as per game balance but I’m used to it being a one hit KO in all other games so it took me by surprise.

It’s not worth using anyway though as it cost your health to use this attack. It takes a solid chunk out of your health bar so even if you land a lot of hits with it, it’ll rarely be worth it. I’d say at best, use it if you’re completely surrounded and are about to be shot down. Then you have nothing to lose and may as well give it a shot. Moves that take up health are just rarely worth it to me in any game.

The graphics are decent here. Nothing too special but the game itself is clear and you always know what’s going on so that’s worth something. The soundtrack is more on the forgettable side but it’s not bad. In general the game just doesn’t have a whole lot of personality. From a screenshot you could easily mistake this for any other aerial fighter. I think they should have done a better job of standing out. Even if this is trying to be fairly realistic, you could still pull it off if you thought about it hard enough. It’s an old game so I’m not expecting anything out of this world but I think it could have done more.

There also just isn’t much of an ending or a sense of accomplishment when you make it to the end. It just starts looping as if this is a super old NES game. I would have liked there to have been some kind of end cutscene or something. That would have done a lot of good if you ask me. Well, it’s not a bad game either way but you probably won’t see me picking it up again. This is very much a one and done kind of game. You play it through and then move on to the net thing.

Overall, 1943 is a decent game to play for a little while. Blackhawk Striker/Shooter is a much better plane game though. If you want a game with a lot of personality and energy then that is the one to check out. Without a doubt that one tends to blow everything out of the water in the genre. This one feels more like a dime a dozen and hey, that’s still not a bad deal for 40 minutes of free fun. It’s just not enough to take it to the next level so I’d recommend giving this one a try and then looking for something more long term.