This review is of the edited TV-14 version of the film. All thoughts below should be addressed as such. 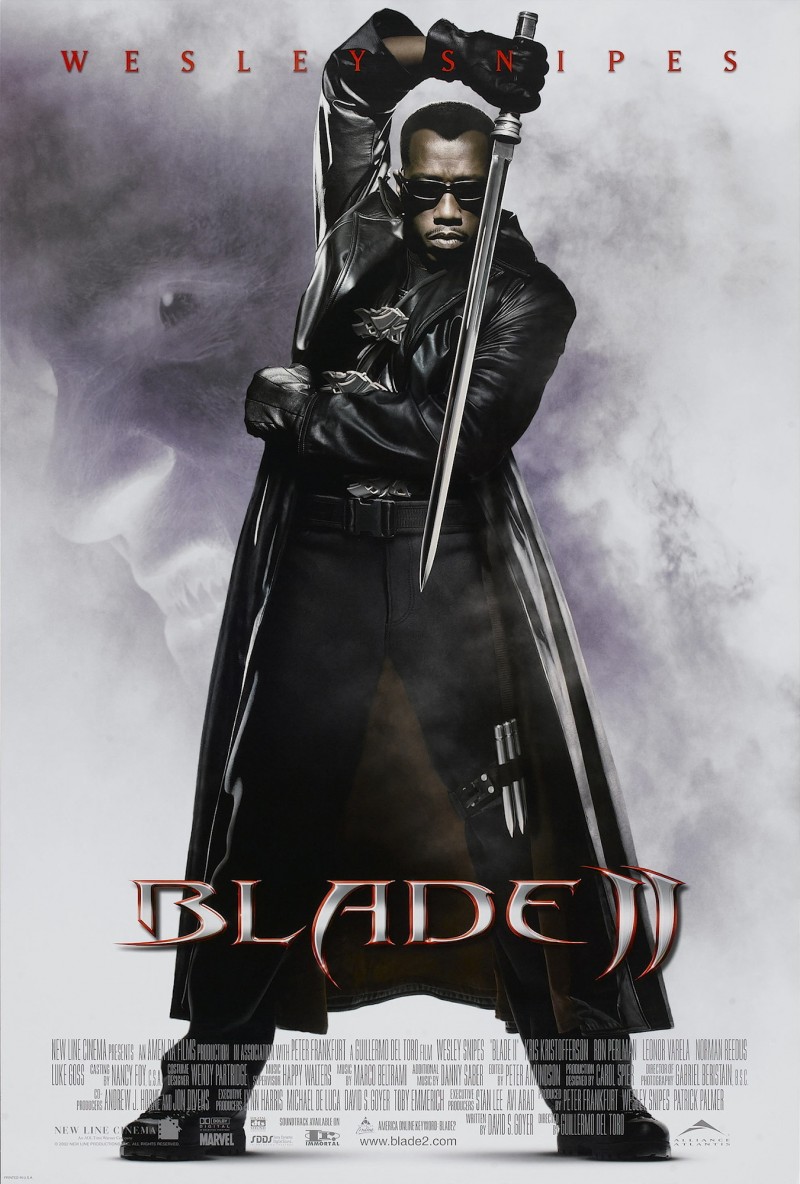 It’s time to look at the sequel to the original Blade film. This time we’ve got him in an actual group so you can expect some of the other characters to get big fight scenes as well. I’d definitely say that this one improves upon the original for me. It’s not by a whole lot as there’s only so much you can do with a gritty vampire film. Still, I’ll take any improvement I can get and we got more special effects with the fight scenes so get ready for some sped up superhero action!

The movie starts off by slightly retconning the ending to the first one. Despite being in a near death state and then shooting himself, The Whistler managed to survive somehow and the vampires have kept him alive for kicks. Blade finds out and frees him. Shortly afterwards Blade is attacked by a pair of vampire ninjas who reveal that they have come to ask for his help. There are a few super vampires running around that are immune to silver and garlic. Defeating them will be nearly impossible without Blade. To this end, they will make him leader of the Bloodhounds which is an elite fighting force that was originally meant to destroy Blade. This is a fragile alliance at best, but Blade figures he should take down the super vampires so they team up. Are the vampires hiding something from him?

There’s definitely a lot of action in this film and the choreography is on point. Blade has definitely nailed the whole “slow walk towards the villains” routine as this point since he does it so often. I do have to give the films a lot of credit for how smooth his outfit looks. It’s very accurate to the comics and honestly it looks pretty crisp. Whenever Blade shows up you know he’s about to take down a lot of monsters. Those fights are always a lot of fun and accompanied by solid rock songs. The Blade series has had a pretty dynamite list of songs and this one is no different. I miss the early 2000s rock that we used to get for the various fight scenes. It still happens sometimes but it is certainly a lot more rare.

The special effects have also improved since the first film. I already spoke about the fight scenes but even the vampires getting blasted away. It’s all pretty neat. My favorite fight in the film was Blade against the two Ninjas. It’s an example of solid choreography with some back and forth action compared to Blade just absolutely dominating the random minions who can’t fight back. Those fights tend to be pretty fun as well but you really can’t compare the two. An even match like this ends up being quite satisfying even if surprisingly Blade may have lost. It depends on how fast he regenerates since his hit would presumably be fatal since it was silver and the ninja attack wouldn’t be, but it would have been a clean shot that could be fatal anyway.

The plot of having to team up with the villains is also pretty interesting. It’s always a very tricky dynamic trying to work with someone who could back stab you at any point. I also like that Blade keeps the upper hand for most of these interactions. He humiliates one of the vampires when they start getting smart and throughout calls all of the shots. Whenever they point a gun at Blade he does the same to them. The early banter are some of the best parts of the film. I consider the plot to be a little more interesting than the first film’s as well. It does have the benefit of being a sequel so we already know the characters.

Now to the negatives which are effectively the same as the first film. For starters the film is incredibly violent. We see a lot of characters get drained and murdered by the vampires. Characters are stabbed and tortured as well. The violence never really ends in these films which can be a drag. It takes away from the moments of the film that actually are good. I have to say that the opening of the film makes everyone look bad no matter how you look at it. It feels like the guy is a bit of a sucker when he’s being led down a series of halls into a locked room with suspect characters. I don’t remember the place looking so shady when donating blood. I get that this is a special place but even so it was obvious that it was a trap. Then it makes the trappers look bad since this is way too obvious. Anyone who is “caught” in the trap is suspect themselves so it was never going to end well for someone.

The writing is okay. There’s quite a bit of language that this version fortunately skips which does help to a degree. It still seems to be a bit of a crutch for the writers. I also have to dock some logic points for how they don’t even bother trying to explain why Whistler survived. There’s just no way he would have lived through what happened and as hard as the film tries to do so, there’s no way they can explain it. I suspect that’s why they don’t even bother. I don’t even see why the plot needed to be brought back since Whistler doesn’t even do a whole lot during the film. Him leaving his post at one point was also an odd red herring. Why not bring your communicator for when your partners are being bumped off?

Overall, Blade II brings in a more interesting plot as well as better fight scenes than the first film. This does result in a better experience for me. That being said, it still can’t shed the vampire roots of the film. I don’t see how the films can get much higher without toning that aspect down a bit. The violence can be quite excessive. Even though none of the vampire members were particularly likable it was still pretty neat to have a whole group structure. It’s probably the closest we’ll see of Blade on a team for quite a while. Ultimately I could see him getting a new movie or show at some point though. If you really like vampire films then you should check this one out I guess since it delivers on what you’d expect with everyone getting bumped off in gruesome ways left and right. On the other hand you can definitely do better.