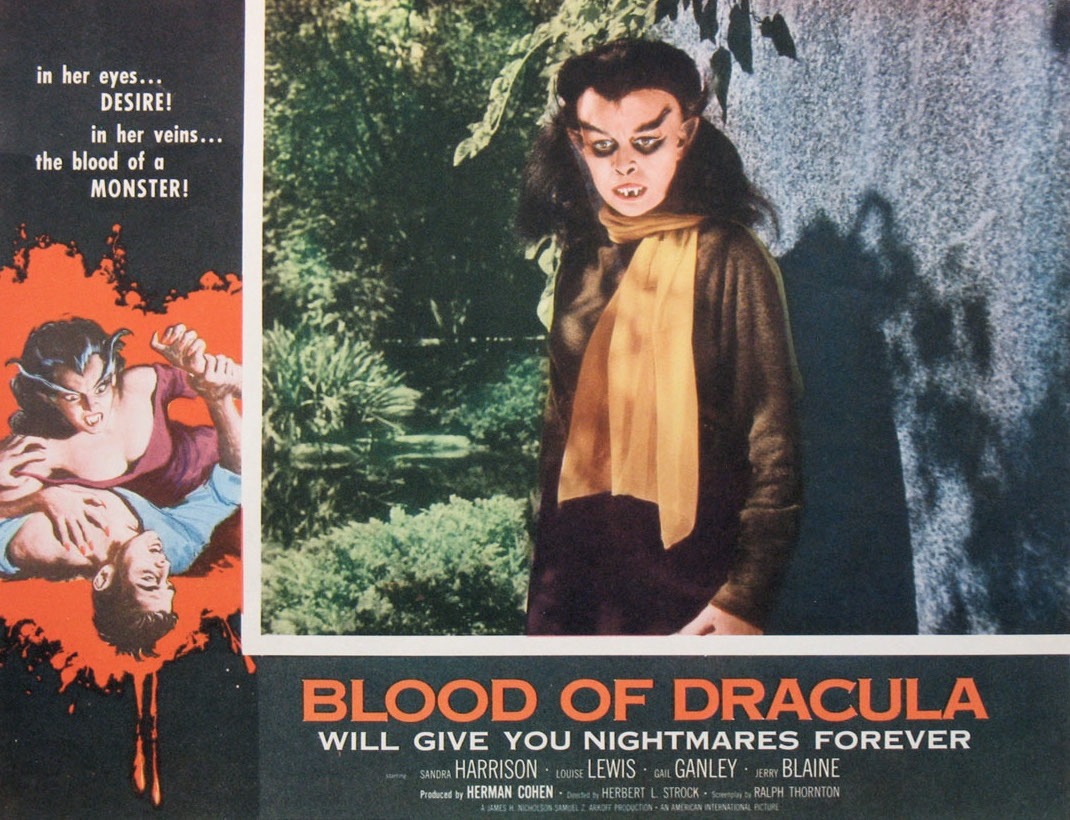 Time for a very obscure vampire film. Part of why I chose this poster in particular is to show you how the vampire actually looks in the film. The effects aren’t great here but the film seemed to be proud of it since we get a recycled transformation sequence a few times. Now I doubt there are very many who have heard of the Blood of Dracula, I certainly hadn’t before now. With a title like that you may be expecting Dracula so I may as well let you down easy now and tell you that this isn’t the case. Dracula is going to be missing this adventure. There really isn’t any connection to him so that was just to sell tickets. This one’s more of a personal story as we find out the dangers of messing around with science.

Nancy is being taken to a private boarding school since her father just remarried and the step mom isn’t a big fan of Nancy. It’s one of those annoying elements where you realize the dad is just as guilty for not noticing this and remarrying so quickly. Apparently it hasn’t even been 2 months since Nancy’s mother died so this feels really quick. It’s all just to get the parents out of the way. The school seems normal at first even if all of the other girls are bullies but the real issue here is that Miss Branding, one of the teachers here is running some dangerous experiments to turn people into vampires. She has always wanted someone tough to experiment on and Nancy is that person. Can she get out of this school safely?

The plot may work well with a thriller context as the vampire starts bumping everyone off but the film’s actually a lot more low key than that. In a way it even makes for several climaxes as I thought the film was gearing up for the end a few times and then suddenly it would go back to some slice of life times until the next event. It’s an interesting attempt but in the end the film just ends up being a little more on the dull side. It doesn’t help that the case is rather weak.

Every girl in the school is against Nancy for basically no reason. It seems like they formed a clique right away and the newest member has to go through initiation. If she doesn’t submit then they will do their best to break her. Nancy is trying to act like the tough girl in some respects but then in other ways she isn’t so it makes her a frustrating lead and doesn’t do anything to make the other girls better characters. They all even take turns dating Eddie since he’s the only guy on campus which makes them look really desperate. I’m sure he loves the arrangement but they are cool with this?

None of them get a whole lot of development except to raise a death flag before they die. Myra is really the only one that really gets a decent sized role here as she knows about Branding’s experiments but looks the other way. As a student it makes sense she wouldn’t want to get in the teacher’s way but she really does nothing to help or alert Nancy. Ah that’s right, it’s because she is one of the bullies as well. So the school really had no likable characters to protect themselves.
As the “tough” character in the film, what Nancy could have done to have been more of a solid character is to have actually fought back. Where she effectively failed the test is when the girls jump her and rob her of all her belongings. That was absolutely the time to fight back and just show them what was up. By not doing that she set the stage for the bullying to proceed more and more. You have to take at least one of them down from the start to lay down the groundwork for their leaving you alone. Perhaps you can’t beat all of them but throw a few punches during the attack and the outcome’s a lot different.

Additionally Nancy just takes the blame for the noise and everything which didn’t make sense. Her worst scene is in the climax though. So presumably as a vampire you have a level of super strength and speed or durability right? During the various action scenes this seems to be the case although with how everyone falls down and looks shocked, this isn’t a guarantee. It was hard to believe when Branding is actually able to overpower Nancy’s vampire form though. That just shouldn’t happen in any context.

The ending is really a letdown on the film’s part. It really didn’t live up to the potential that the movie had although I wouldn’t say it was a ton of potential either way. This was never going to be a great title because vampire films just aren’t built that way but it could have been better is what I’m getting at. The climax is trying to be intense and give the final fight that we’ve been waiting for but it just doesn’t work.

By the end you’re also wondering on the point of these experiments. We may have needed some villain exposition for a change so we can understand the purpose. She says repeatedly that these experiments will help humanity but in what way? It’s very unclear as to how turning into a vampire will help humanity in any way. Is it only some chosen people whose dna is able to activate with her talisman or can anyone be picked? There are a lot of unknowns and at the end of the day we don’t even know if she has more talismans to hypnotize people with.

Also, as in all hypnotism films you just wish Nancy would look the other way or fight back against the control a bit. In all of these films the character is mind controlled so very easily. It’s like they have no self control or will power to defend themselves with. It also doesn’t make for the most riveting scenes as the characters just stare absentmindedly into the abyss. That said, mind control isn’t an excuse on why Nancy was so cold with her boyfriend though. She couldn’t give him a single straight answer and it just made their relationship strained for no real reason. Just tell him you need some space but will rejoin after the school term has ended if you want him away from the danger or ask to drive off with him if you want to get away from the evil school. Either option would have worked better than just being completely vague the whole time.

That guy gets credit for driving so far to check on her and make sure she was okay since he hadn’t received any word from her. He’s braver than Eddie who was scared to even be in the graveyard with one of the girls when everyone is used to hanging out there. That guy was doomed the instant we found out there was a vampire on campus. As a vampire film you have the usual amount of victims as their blood gets sucked away and you even have the police step in at one point but it isn’t as exciting as you might expect. The one police officer who believes in vampires is quickly laughed off in their first scene. You would think that after the first murder or two they would just shut the school down but that takes a while to even be considered. Even then it’s mostly in the background as the principal discusses the possibility of the parents making a move. (I like the level of dread that is felt whenever the “parents” are mentioned. The best conversation is between him and the lead teacher as they talk about the school’s reputation.

The film is a lot more tame than most vampire films so there isn’t a lot of blood sucking or anything like that. That’s a good thing at least but ultimately it can only help out a bit since the rest of the film is more on the mediocre side. It just doesn’t hit with the kind of power you need in any aspect. Throw in a likable character or give the police investigation more screen time and you could have something interesting here. As it is, there’s really no hook to the film.

Overall, Blood of Dracula is a film that really goes through all of the motions without a whole lot of emotion or feeling. There is no mystery here as you know Nancy is the vampire right away and the main drama is trying to figure out how she can break the hypnosis. The issue is that she just isn’t really able to even try since she doesn’t remember. Each time she has a feeling that something’s off but just goes back into the teacher’s office like nothing is wrong until the very end of the film. It felt like this movie wasn’t sure if it was a slice of life or a thriller at times and as a result just meekly walks through the adventure. The worst thing you can say about this one is that it would have been better off just being a normal slice of life flick. You’ll want to give this one a skip.