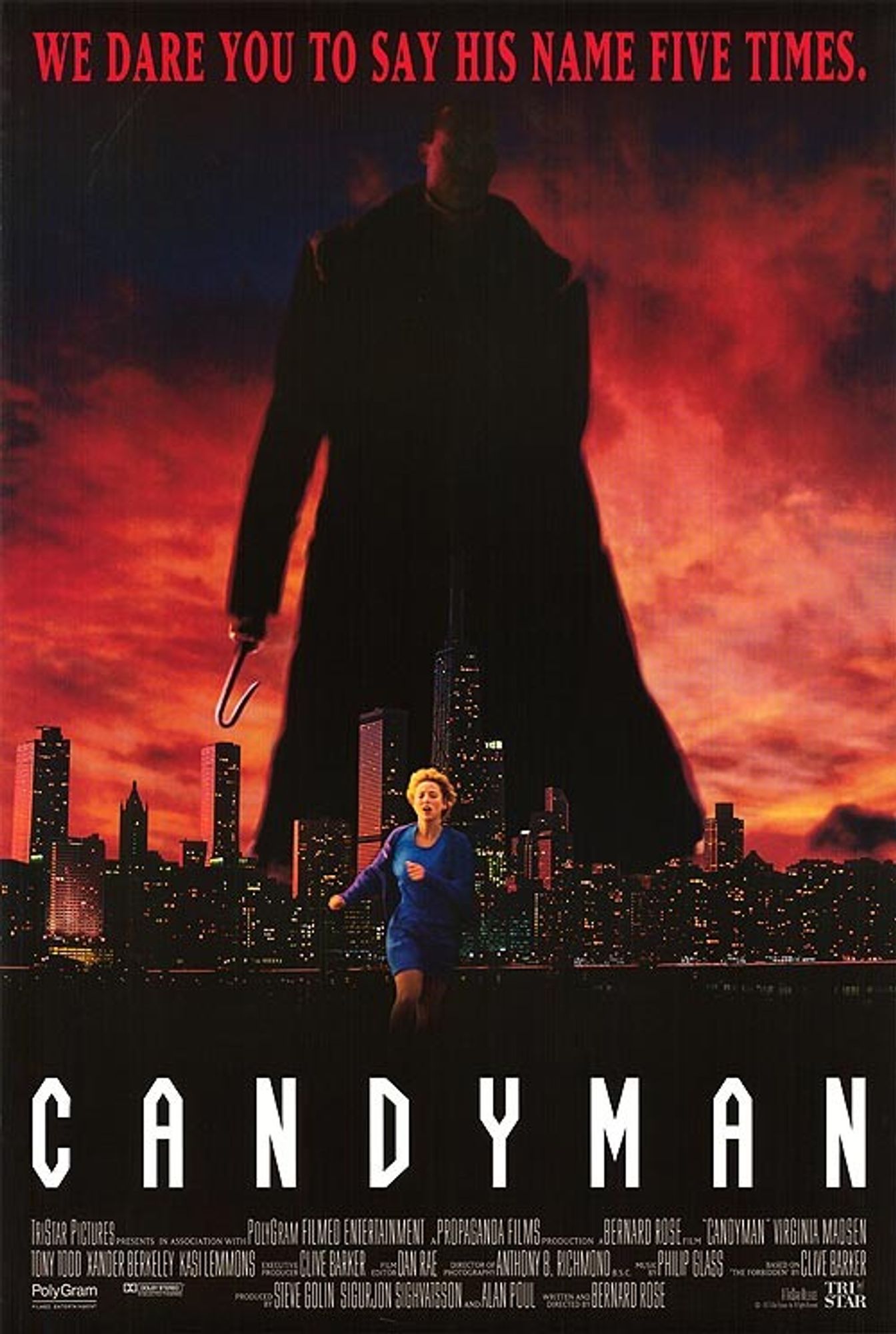 Candyman plays out exactly like the kind of slasher horror you would expect. I’m still not entirely sure why he is called Candyman but there’s got to be some slang or history in the term that would explain it. Now in the recent remake they make it quite clear by changing up his origin but in this film…yeah it’s a bit of a mystery. Not enough of one to save the movie though.

The movie starts with some guy getting ready to have a cheating affair with a girl. She randomly brings up the legend of Candyman, basically a guy who fell in love with a girl back in the day but this was back in the days of segregation and the town wasn’t going to abide by a mixed relationship. Candyman was tortured and murdered and now haunts people from beyond the grave. If you say his name 5 times into a mirror then he will appear and murder you. So at this point the guy should ask “Who starts a conversation like this?” Seriously they’re about to start the affair and she suddenly brings this up as a complete mood killer.

The guy says the name 4 times and then runs off but the girl says it a 5th time and gets murdered. We cut to the present where Helen is writing a paper on Candyman and needs to do a lot of research. Her friend Bernadette is helping with this but starts to think Helen is going too far. Helen wants to go to the seediest neighborhood in town for extra research and even wants to say Candyman’s name 5 times in the mirror to make sure the legend is false. Candyman doesn’t appreciate her trying to discredit his legacy so he makes his move.

Candyman is one of those spirits who is only powerful while people believe in him which should be a rather big weakness in the modern day. How many people actually believe in this guy right? His abilities are rather unique for one of these slasher villains. For starters, he has the powers of epilepsy which is not something to be taken lightly. He can flash crazy lights into your mind which prevents you from running away. This is something he used on Helen when she tries to escape in the parking lot at one point.

Among other abilities he seems to have illusions, super strength, regeneration, and a bunch of other powers. It does feel like defeating him might actually be possible compared to some opponents like the Grudge but it’s still super unlikely. There isn’t much to the Candyman in terms of motive and everything though as he only starts to deal damage when someone says his name 5 times. So if he really wanted to get revenge on everyone or restore his legacy you’d think that he would be more proactive about it.

Helen has a strong case of plot armor in this film though as he doesn’t murder her instantly the way that he does to everyone else. Now, he wants to use her to further his own legacy but in a way won’t this make it weaker? Everyone just thinks she is insane the whole time, not that Candyman is possessing her so it doesn’t do a lot to strengthen belief in him. The fact that he also goes to sleep and lowers his guard is something else too. Helen came quite close to taking him down at one point.

As with any slasher movie though, the film likes going overboard on the violence. Get ready for characters to be brutally murdered. The film also goes for a rather disturbing angle with the whole Bees thing though like Candyman forcing a marriage with Helen. That whole scene was really disturbing and quite gross with the bees coming out of him. I definitely could have done without that.

As for the characters there weren’t a lot of good ones here either way. For Helen, she really wasn’t smart with how she would do her investigating. You absolutely need to have a cop with you or a lot of friends if you’re going to go into some dangerous areas by yourself. She was lucky that she only got beaten up and wasn’t murdered on a few of her escapades. Even when Candyman first shows up with his incredibly loud voice and mysterious get up she is super slow to act. She just talks as if it’s a normal conversation instead of getting into the car and speeding away. This allows him to get close enough to use his seizure abilities on her.

Bernadette is the only reasonable character here as she tries to hold Helen back and stays in her corner. This does get more difficult for her when Helen is framed by the Candyman and it would be hard to blame her for walking away at that point since every bit of evidence was against the lead. The old “Candyman possessed me” argument wouldn’t really work in court.

Then you have Trevor for some relationship drama. He’s cheating on Helen with one of his students and it’s one of those plots that may not add anything to the film but I suspect it’s there for more motive on why she may have cracked. To the outside world is gives them more reason to suspect that Candyman isn’t real at the very least. Then you have Anne who is doing her best to raise her newborn kid but unfortunately gets roped into the whole candyman business thanks to Helen.

One thing about Candyman is that he really doesn’t mind collateral damage so her kid is put in danger just for being around. There’s one guy who is murdered without ever even uttering the name Candyman. In a way this is even more tragic for them because they aren’t even able to see him since they weren’t the summoner and as such have no real way of defending themselves.

As a horror film we do get a twist ending of course which is pretty solid. Lets just say that one character definitely didn’t make the smartest move. I don’t even know how you say someone’s name 5 times in a row without meaning to. How? Either way this character doesn’t last too long and we see the birth of a new legend. In theory this could be a good villain for the sequel or if Candyman is still around then it could be a vs movie. Of course that won’t happen but I think that would have been the best decision for a second film.

The only good thing I would say about the movie is that the soundtrack is rather intense. It goes for a very opera type feel at all times. Candyman likes his regal music and as the guy seems to think of his followers as being in a religion of sorts then it makes a lot of sense. The soundtrack was memorable which is always important for these kinds of things. It at least puts Candyman ahead of the curve in that respect.

Overall, There just doesn’t seem to be a whole lot of point to Candyman. He’s one of those delusional killers who doesn’t just want to leave a trail of bodies but also wants to make sure to break Helen first. He’s completely obsessed with her but it’s such a one way battle because he can knock her out or possess her at any point with no effort. So really the film is just about him toying with her and that kind of cat and mouse game certainly won’t end up being entertaining. Throw in all the extra violence, unlikable characters, and Candyman wanting to marry/merge with her and you’ve definitely got yourself a big miss here. Maybe the sequels can change things up but in the meantime you will want to skip this one.