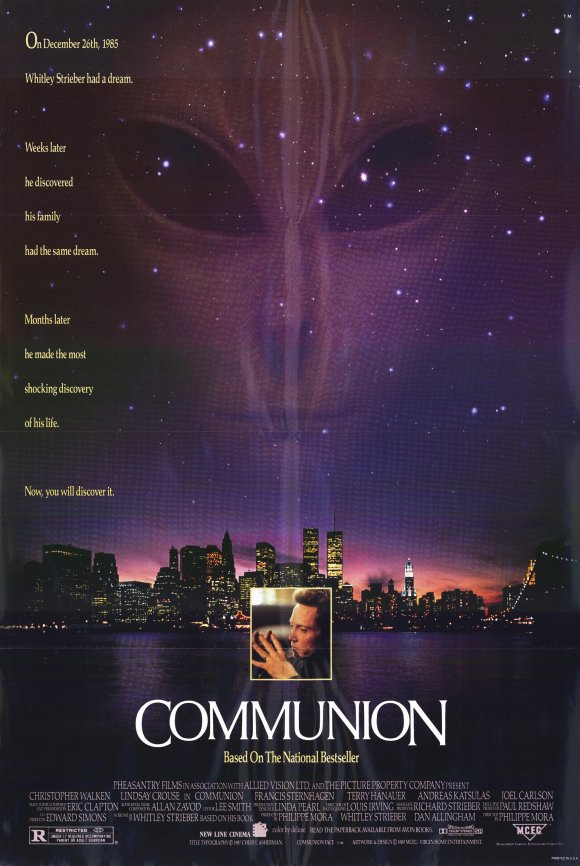 Whenever you have a film with aliens in it you are hoping that a lot of fun things are in store for you. Aliens should be fun and make for imposing villains. Unfortunately that was not the case here. The film is based on a book of pure fanfiction from an author who was delusional but you hope that the film can surpass this. That’s not the case though and the film is very weird from the start. This weirdness ultimately starts to crossover into just being an awful film and by the end you’ll be cringing so hard that this will hit rock bottom. The film was just reeeeally bad.

The movie starts with a guy named Whitley who is an aspiring author. The issue is that he can’t focus on anything for more than 5 minutes so instead of working on the book he’ll play pranks on his wife and kid. Whitley is always rambling on about random stuff but one night when a few friends are over there is a bright light that shines across the world. An alien shows up as well. Whitley doesn’t want to tell anyone about this though so he keeps quiet and continues to go more and more insane. Eventually the aliens come back to kidnap him and things get dicey for the guy. Can he cope with the experiences that he went through?

Part of the problem here is even before the abduction, Whitley already seems certifiably insane. He just never makes any possible sense. He’s always wearing a different costume while working on his book and never ends up making any progress on it either since he ends up throwing out what he had started on each time. Then once the aliens do appear he starts to grow worse as he sees them everywhere. Hypnosis only makes the visions grow even more and he can’t trust anyone even at the end so he fights on his own. One of the annoying things about Whitley is that he’s also really bad at explaining things. Often times he may make an attempt to talk about the aliens but he does it in such a round about way that it doesn’t get through.

Additionally, the aliens seem to have told him not to tell anyone. Throughout the film we eventually learn more about what happened. See, initially we only get the quick jump scare before going to the present but a lot more happened that night. By the end of the film we learn that they definitely did a number on him. So, you would expect that after this he would probably want revenge or something right? Well, this leads to the most insane part of the film where he tracks the aliens down and ends up dancing with them for kicks.

Never mind the fact that the aliens also attacked his wife and used psychic powers to murder his son once already (and vowed to return) but he still wants to dance with them. He takes the old approach of forgive and forget. His wife doesn’t seem to mind either when he tells the story to her. The whole thing is just off the walls. It’s clear that after a point Communion is intentionally trying to be as weird as possible. The characters just don’t make a whole lot of sense with their actions. If they should do something then they will do the other. I dare say the dancing scene had to be part comedy or something. How do you seriously do a scene like that? The music was also as happy as possible for ultimate contrast.

A better film could have handled this well as perhaps a parody of some sort but not this one. This film seems to actually be trying to have a horror vibe at times but I can tell you now that it doesn’t succeed in the slightest. The characters are all too ludicrous for that to work. They never act scared in a natural way so why should we be scared? Whitley has a panic attack at one point when a kid scares him using a costume and it’s so over the top that you’ll just be shaking your head. The writing isn’t any good either. You’ll lose count of how many times the wind has to silence Whitley as he goes off on a tangent. The actual story makes no sense either.

The film doesn’t exactly have any subtlety either. For example a big thing here is that Whitley is traumatized because the aliens physically ran experiments on him including some rather invasive maneuvers. Anyone can put the pieces together particularly because there are tons of memes about this and it’s the first question someone asks whenever anyone mentions being abducted by aliens. Communion doesn’t realize that though so we get a long flashback detailing this just for extra grit and edge. The movie tries to make this as tragic as possible with Whitley attempting to fight them off at first, then trying to joke around so they’d let him go but none of this works.

It makes the rest of the scenes with him and the aliens even worse. It seems like the film was trying to say Whitley had stockholm’s syndrome with the aliens to an extent and that’s why he likes them now but that’s a very disturbed way to end the title. You just know that by the end he has completely lost and that’s the real shame here. There isn’t a happy ending to be found as the aliens have won and you know that more and more humans will keep on being attacked. Since nobody believes that the aliens exist it’s not like anyone has begun to fight back against them either. That just means that the aliens have completely won.

The premise has some potential of course because alien invasions are fun. Maybe have the government find out about this and have them send over some heavy artillery. I think that would go a very long way to making this interesting. At the end of the day one of the big things holding this film back aside from all the other negatives like the endless flashbacks, slow pacing, extra grit, and characters making nonsensical choices the entire time is that the character cast is just really bad. They all come off as insane and it’s really hard to follow a group of characters like that.

Overall, Communion is definitely a disgrace. There aren’t any core positives to be found here. The movie wastes a whole lot of time in each plot so the story developments that are in the film could have easily been handled in half the time. I like to think a sequel could start to fix this film a bit by making it a total action thriller but the first step is to completely shift the focus from this film. Maybe even ignore this film entirely so in a way the sequel of this film would be starting from scratch. Kind of like a reboot. Regardless, I would highly recommend staying far away from this one.