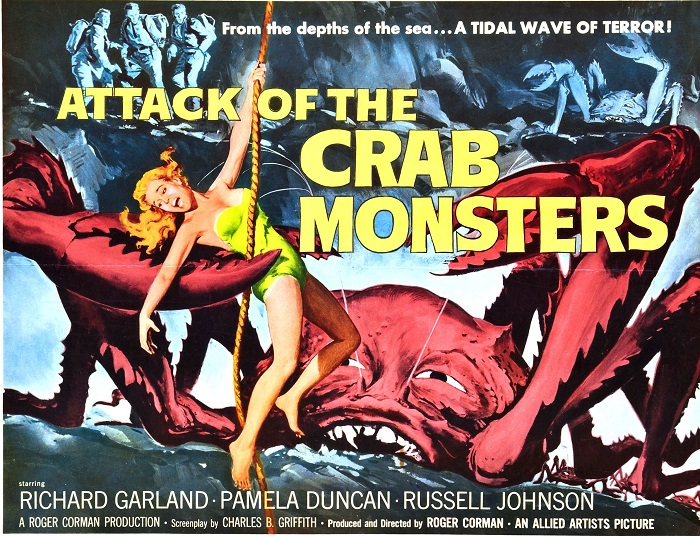 Whenever you see a title like this you know you’re going to be in for a good time. They just don’t make creature features like this one anymore. At the same time Roger Corman usually only delivers pretty bad film experiences at least from the titles that I’ve seen so this was really a close one. Would it be amazing, terrible, or somewhere in the middle? I wasn’t sure if I was ready to find out but then it was time to dive in and it actually worked out quite well. This is definitely his definitive title at the moment.

The movie starts by introducing us to the main cast. They’re not exactly the most memorable characters but you’ll quickly get the dynamic. You’ve got the main heroine Martha who is an experienced biologist. She is going to an island along with fellow scientists Dale, Hank, and a few other people. This group is trying to do some research on the radiation that covered this island not too long ago. I feel like they should have protective suits but I suppose at this time it wasn’t really known quite how long radiation would tend to linger in the area. Well, everything appears normal at first until it turns out that the radiation has changed the Crabs in the area. Now there are huge Crabs roaming the area and murdering people left and right. The heroes want to get off the island but it isn’t really an option at the moment because of huge storms. When you try to escape your plane either blows up or you fall into the ocean and get obliterated. Making things worse is the fact that they can hear the voices of their dead friends.

One thing that really differentiated this from your classic monster film is the whole ghosts aspect. Now it seems like there are ghosts around but there’s actually a great deal of intelligence on the crabs part making it seem that way. Here’s where things get pretty interesting. The film has an Invasion of the Bodysnatchers element to it on top of the classic Godzilla action. There’s even a bit of a mental thriller aspect here. So the Crabs have the ability to mimic the people they murder as well as hold onto their memories. They turn these people into their arms of sorts and also get regeneration. It’s sort of like a hivemind of sorts. Once you are absorbed you can say goodbye to being a good guy. It made the enemies so much more interesting than they would usually be. I mean, a giant monster running around blowing people up works well too but I just liked this spin on things.

One of the best scenes in the film is when one character goes outside after hearing his friend call out to him. Now you do have to excuse the fact that this guy isn’t very smart at all since the “friend” is saying a lot of suspicious stuff like coming alone to the abandoned cave in the middle of the night and not to tell anyone. That should throw up a few red flags right? I mean…what friend would tell you that? Well, the guy goes anyway and does the whole “Where are you” yells while looking around. That’s when you hear the guy say “Right here man” in a very calm voice as a giant claw shows up and ends the guy. It’s a pretty intense scene partially because it’s so unexpected. I mean, you know foul play was involved from the start but I just wasn’t expecting these mastermind Crabs. It was really quite genius.

Now, that’s not to say that the movie is perfect of course. The writing is pretty solid but the characters are all very lacking in common sense. You wonder how they became such top notch scientists because they make a lot of mistakes here. Splitting up, entering abandoned caves, etc. Even by the end Hank gets way closer to the giant Crab than he needs to. You could have done the plan from a better distance. Then you’ve got Dale who is always trying to keep Martha out of the action but leaving her by herself isn’t really going to help her out much. I also question the scene with the Giant Crab in the closet and his reaction. He basically panicked and ran out but did the whole “Can’t tell you what’s going on” to Martha and split. You should probably mention the Giant Crab right away.

The movie has some pretty intense scenes like one guy’s head literally getting taken out but the film’s usually not very gruesome. It can be surprisingly intense for its age but it’s nothing too drastic so you should be okay. The Crabs just don’t take any prisoners and I could have told you that. I suppose the worst thing you can say about the film is that it’s fairly forgettable. The characters are all very traditional with personalities that just don’t stick. Martha’s a nice lady who knows a lot about science but does faint if things get too difficult. Dale is the everyday man of the group who does his best to cope with the situation but tends to snap a lot. Then you have Hank who can come up with ideas at times but isn’t even the smart one of the group because everyone here is relatively smart. Then there are two sailors who are around but you know that they’re doomed from the start.

The most annoying character is easily the oldest scientist. So he figures out that something is wrong almost immediately but refuses to say anything about it. He keeps telling the other characters that they’ll know eventually but that’s not very helpful in a life or death situation. He kind of goes out like a chump too. I dunno what the guys deal was. To me it felt like half the time he wanted the humans to lose to the Crabs but when he got bumped off he didn’t seem too keen on the idea anymore. Maybe the whole thing just played out better in his head? That’s the only explanation I can think of but it didn’t do him any wonders. Makes for some fun dynamics though.

Overall, Attack of the Crab Monsters is a pretty surreal film. It works really well though in large part due to how original it is. You just don’t see movies like this with the monsters actually having master plans and overwhelming the heroes like this. The main monster basically acted like a tactical genius and I suppose it makes sense with how many people he’s absorbed. The voices added to the effect and the movie just passes by real quickly. The characters aren’t very smart but I wouldn’t dock points for the film from that. The writing is still a lot of fun and this just feels like a very balanced movie. You really can’t go wrong here.