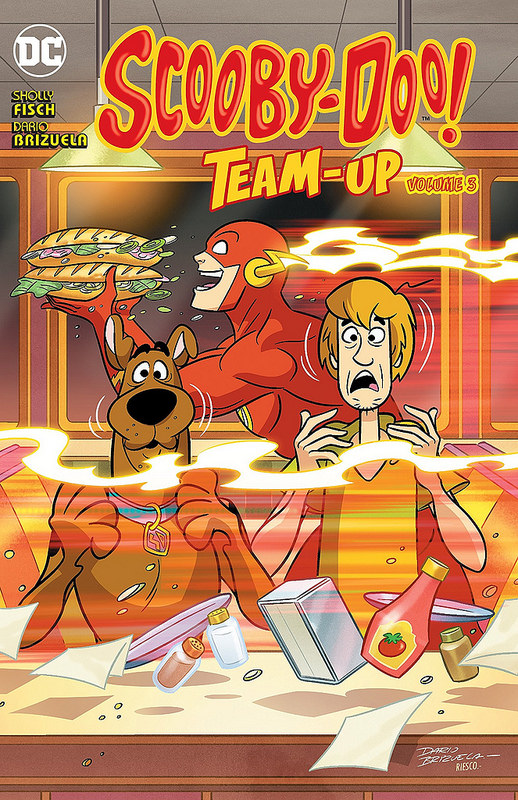 It’s time to look at another volume of the Scooby Doo and DC team up series. It’s been quite a while since I read the last one so it’s pretty nostalgic to see it return. The Mystery Inc definitely makes for a good crossover cast with how confident they are in their deductive skills. No matter how powerful the villain is they just continue to solve the case their way. It’s admirable even if it causes them to get in a lot of trouble. The stories in this volume are all pretty solid even if the final one is a bit weaker than the rest.

One of the stories has the gang head over to Fawcett city when Shazam and the rest of the Marvel family disappears. Granted, Uncle Marvel stuck around along with the cat mascot. Unfortunately they have no idea what happened but the Mystery Inc is up for the challenge. Along the the way Velma and Shaggy even get their own blend of Marvel abilities do they can finally fight with the best of them. It’s a nice payoff for fans who have always been waiting for some kind of power up. Definitely a nice story and seeing the gang get abilities is always fun as well. It’s not like Shazam got beat in an actual fight either so at least it wasn’t a moment of plot hax for him to be saved either.

Another story had Scooby Doo get recruited to help The Galactic Dog Patrol (Not their exact name but it is nice and descriptive) as their main members where all destroyed by an evil villain group. There are 2 groups running around, a cat group and then there is an evil dog. The cats are defeated rather easily but the dog ends up being an issue. Good thing Scooby is here. Surprisingly the issue actually has quite a lot of action so that helped it get past the issue of the human characters not being around. Pretty much the whole comic was a bunch of fight scenes and I can always get behind that. Scooby Doo can get rather annoying though. Even when the villains are making a move and the stakes are serious he actually tries to desert the team. There is being a coward and then there is just being a traitor. Abandoning your friends to die gets into the latter’s territory so the dog couldn’t save himself after that.

Another issue was with the Phantom Stranger. He visits the gang on Halloween and asks for their help. A villain has been defeating all of the cosmic beings of DC. This should surprise no one and the gang takes it in stride. They figure that the Spectre can save them but alas he was defeated as well and then the Stranger is tricked into falling in the cage. Scooby will have to use a forbidden power to save them all but at what cost? It’s good to see Scooby step up even if it isn’t willingly. A pretty fun comic and it’s always nice to throw the gang into a situation or cosmic significance like this.

We can’t forget the issue with Hawkman and Hawkgirl either. They are up against 3 ghost related villains so naturally the Mystery Inc are the first people the cops call. The superheroes actually seem rather offended about this, but it’s not like the cops have their cell numbers. Meanwhile everyone knows how to contact the detectives. It’s a pretty nice issue like the rest. I may not be a big fan of either Hawk character, but maybe that’s why it’s so good as the Mystery Inc puts them in their place.

The Flash issue brings back Gorilla Grodd who is certainly a classic character for his mythos. It was a little less interesting than some of the other stories for that reason though. I can’t really take Grodd all that seriously usually. A slow villain vs a fast hero? This does not compute. Still, it’s not as straight forward as just tackling the guy sometimes (Even if it could be) and it’s still a good issue. Finally we also have the Aquaman team up. His kingdom is being attacked by Black Manta and the Ocean Master so the King has his work cut out for him. Honestly there wasn’t much that Scooby and the gang could do to back him up in this case but they did give moral support and were always willing to yell if they saw something. If I’m giving them a fair trial then I guess I have to admit that they did help in beating the enemies a little bit, but there just wasn’t much detective work for them to do in this case since the villains were already known.

Now this is probably around the part where I have to point out that Shaggy and Scooby are still as annoying as ever. They constantly let the world know that they are scared of what is happening and it’s just embarrassing for the rest of the gang. They are always ready to ditch the others and prove time and time again that they aren’t really heroes. You just can’t trust these guys and it might be time for Fred to cut them loose. It would be tough to fire a friend like that, but Shaggy and Scooby have failed them for the last time.

Fred, Daphne, and Velma are solid as always though. Their roles here naturally aren’t as big as the dynamic duo’s, but they get their moments. Fred actually manages to knock one of the villains to the ground which prevented him from escaping. Velma manages to use her deductive skills a few times to determine who the villain is and Daphne is always around to keep everyone in line.

The art for the issues is pretty good. All of the characters are on model and it’s easy to tell what is happening at all times. The art style goes for a rather basic approach which is smart if you ask me and it’s easy to read through. It can also make for good fight scenes although of course you shouldn’t expect too many of those. It’s just a nice nostalgic style which will remind you of the classic Scooby Doo days. The writing is also good and helps equally in achieving such a nostalgic frame for the volume. These stories could very easily be turned into episodes and nothing would appear to be out of place.

Overall, This was a fun Scooby Doo adventure. I certainly had fun reading it and not actually having any bad stories is always a plus. It’s a rather quick collection so it won’t take you long to finish it all off. I already have the next volume at the ready so I will be reading that one shortly. We’ll see if it can match this one. The team ups deliver on what you would expect from such a crossover. It has the comedic charm of the Mystery Inc while also adding in a little extra action for the DC fans. Now all we need are more Superman and Batman team ups with the gang.