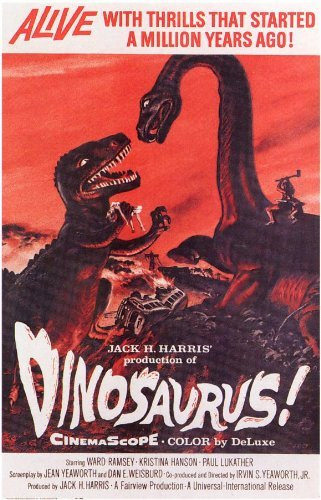 It’s time to look at an old Dinosaur film that probably has one of the most creative names I’ve ever seen in the genre. Unfortunately the actual film is rather bad and you’ll just be wondering where it went wrong the whole time. The premise is decently good but the execution is pitifully bad and so you can understand why the film was forgotten.

The film starts off with a team of diggers/construction guys trying to finish a project in time but are being held up by the government. Bart is rather irritated because he had gotten the governor’s approval for the project but the second on command doesn’t want to help. He doesn’t have much of a reason for the resistance so I’m assuming that the guy just likes to be a nuisance. After all, despite the tough talk the heroes are basically powerless without him as the guy is the only one who can get mail off the island. The villain is sure to burn the letter before it can be read of course. Things get a little crazy when a Cave Man and two Dinosaurs break out of the ice and things start to get wild. Can the Bart stop the madness before the governor hears about it or will he simply be eaten!?

The film is rather loaded with plots as you see but the writers don’t know how to handle any of them. The first we should look at is the villain’s plot. It’s actually rather dark as he uses his power and influence to bend everyone to his will. The characters look the other way when the villain attempts to have his way with the maid and we also see that he is rather tough on the kid. At least the main character was in the room for the latter scene but doesn’t even land a hit on the main villain as the guy gets off with a simple warning. The villain even puts up a fake act about worrying for Julio’s safety which Bart actually buys. Bart is a whole lot more gullible than I would have suspected. As you can guess, I didn’t like the main villain and his entire character was unneeded when the dinosaur should have been the focus. Why should there be a gang of corrupt bandits on the island?

Then we have Bart. I guess the character is good at face value as he is a nice guy who wants to help out and make a difference but he is a pale imitation of any other heroic main character. There just isn’t much to him although he is probably the best character by default. Then there is the main heroine who is also fairly generic but in this case that is a bad thing as most of the old female leads weren’t exactly known for their bravery. She faints 3-5 times here and usually over nothing. We can’t forget the tripping either. This character is really just annoying.

Then we have the Cave Man who definitely isn’t a fun character. He is more heroic than the rest which is a great start but of course they play up his base desires a bit as no film can seem to keep it classy with this kind of character. I think the Cave Man should have sat this film out. The same goes for Julio who is a main character here. Despite the kid having a pretty tragic childhood this far, he doesn’t seem to have learned anything. Surely by this point he knows to stay away from the main villain right? He doesn’t seem to get this fact at all. The kid also isn’t very useful during the dinosaur fight and if anything he just holds the Brontosaurus back.

Of course the victor was never really in doubt if we are being honest. Nothing can stop the T Rex. While their role was rather small, it was still nice to see him the Dinos. Their role was rather small though and the fight was definitely brutal. That should have been toned down quite a bit to make the fight more enjoyable but in general the film should probably just avoid them fighting at all. Even with stop motion, you gotta be careful with animal fights.

I have to also point out that the roar in the film was rather odd. At first I thought it was a sound that the block added to the film but then it kept on happening so I figured out that it was real. It was a good roar, just an unexpected one. Finally, I will say that I didn’t buy into the climax. No way a T Rex is going to lose out to a little tractor machine. That’s just not happening. I was hoping the T Rex would pick up the tractor and throw it into the ravine.

Overall, Dinosaurus is not a particularly good movie. It isn’t very fun or entertaining. None of the characters were all that good and a weak cast is the first step towards a film falling down with the score. I don’t see why the film decided to add a Caveman to the mix either. I guess they really weren’t confident in their actual premise about dinosaurs. Pretty much everyone dies by the end so the heroes end up going back to the status quo. The ending would have been 100% more hype if we had heard one last roar at the end. I’ll give the film a tiny bit of credit for adding a question mark at the end.