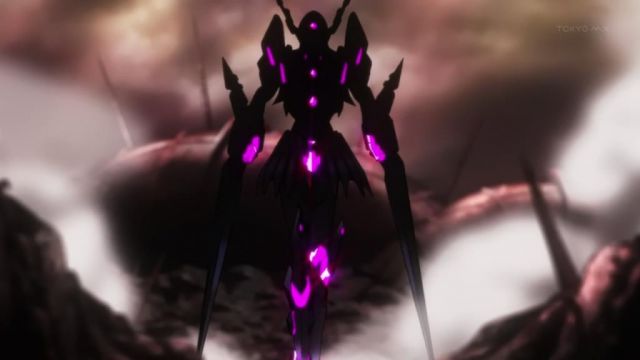 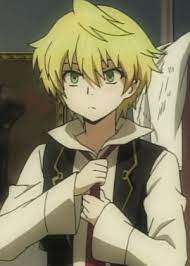 Oz Vessalius is a capable kid who did his best in trying to unravel the mysteries of the world. He can fight but he’s not ready for a battle hardened warrior like Kuroyukihime. She earned her title as one of the kings due to her unbelievable power. She can move faster than Oz would be able to capture with his eyesight and her attacks have a solid amount of piercing power. A single good hit would easily win her the match. Kuroyukihime wins.

Suggested by Sonic Kuroyukihime is one of the 5 Kings and a being of incredible power. Skin’s main advantage in combat is usually the fact that it is hard to deal any damage to him. That’s going to be his downfall here since Kuroyukihime has enough power to bypass his defenses. Mix that in with her massive speed advantage and that’s a wrap. Kuroyukihime wins. 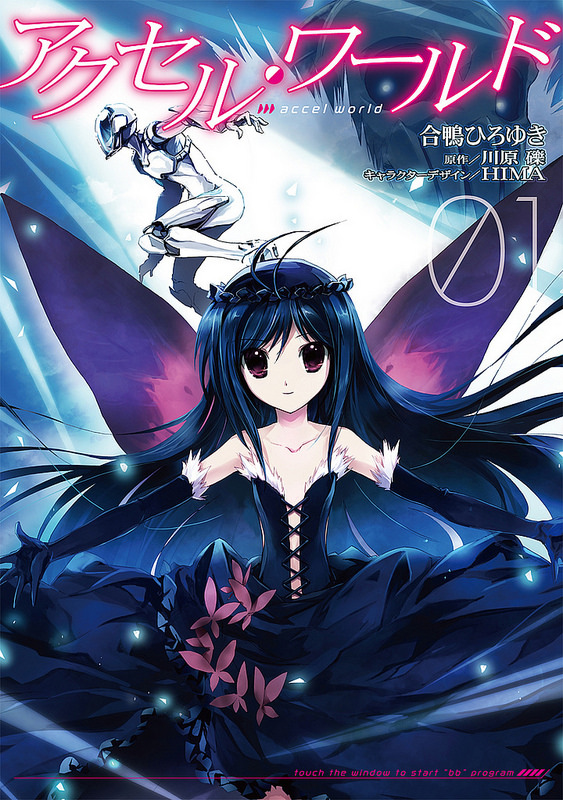 Accel World has always been a series with a good premise. A fighting game with total VR is always something that I like to see and the combat designs are on point. However, The main character often holds the series back with how bad he is and that is likely always going to happen no matter the medium. Well, the manga decides to play out like an abridged version of the manga. It adapts a book, skips a book, adapts, etc. I can understand why they would skip an arc that was already animated and all but as a result the manga ends with an arc that doesn’t really have any fights. Ah well, it’s still a decent adaptation.

The series follows a kid named Haruyuki. He is down on his luck as everyone bullies him. He has two friends, Taku and Chiyu. The dynamic between the three of them has grown awkward as the other two got together. Fortunately for Haru it appears that Taku is evil so Haru will now be able to beat him up. Haruyuki also befriends the school club president Kuroyukihime who introduces him to the real vr game known as Brain Burst. Essentially you fight other players to get points and level up. With these points you can stop time in the real world and use it in all sorts of ways to get through life. The downside is that the pain you feel in the game is very real and you may be targeted in the real world by other players. Will Haruyuki be able to get through all of this or is it over for him?

Accel World does a good job of not feeling like a cash in when it comes to the art at least. It looks pretty sharp and the character designs are on point. The fight scenes look good as well so there was definitely some real effort put into it. It’s not even a case of the series starting out rocky and then hitting its stride as the first fights in volume 1 already look good. At most, the humans can look a little chibi at first, but the designs look more like the anime by the end. It naturally can’t look quite as impressive as the anime which really takes advantage of Silver Crow’s flight speed and all of the energy effects going on but the manga does a really good job regardless.

Another thing in the manga’s favor is that it adapted the short story from one of the Accel World novels where Haruyuki gets to meet up with Kirito. Kirito is definitely the fighter that I would put my money on, but Haru does a good job of keeping the fight close. Seeing as how both series are still ongoing I would definitely be up for a full crossover arc that continues across both series. Even if it’s just one novel from each that would make for a pretty epic story. The crossover chapters were certainly very intense and did a good job of giving Kirito his due respect. I think we both know who would win this fight.

One of the negatives for the series is Haruyuki. He’s still as unlikable as ever to the point where you feel it’s intentional. Most main characters just stumble into awkward situations while Haruyuki actually tries for them. He really can’t handle talking to most of the supporting characters and gets intimidated by everyone. He let’s dark power consume him with ease. There aren’t really any redeemable qualities about him and it’s just tough to have a main character like that.

At least the supporting cast is better. While Taku starts off as a very iffy character and it’s hard to go back from that, at least he ends up being an interesting character. A shame that he is stuck in a very slow avatar that basically never gets to win an important fight. Chiyu is another of the main supporting characters and she is good although Chiyu can be iffy at times. She practically states that she only went with Taku so as not to break up the band and once they split she seems to be flirting with Haru at times. It may just be her chipper attitude mixed with Haru always acting in the worst way possible for each exchange but you can’t help but feel that she was never interested in Taku. I didn’t agree with most of her decisions in the arc that was skipped, but since it was skipped it doesn’t even matter all that much.

On that note, it makes sense that the manga would have to skip parts because the pacing can be rather slow. Not in a dragged out way, but the manga really wants to be as detailed as the anime so each chapter won’t adapt a whole lot. This is one of those series that works best when you marathon it in volume format. I can barely believe that it was 8 whole volumes as it just feels a lot shorter, but it has been a very long time since I started the series so I suppose it makes sense. By skipping around, the manga could still adapt later parts while giving the early ones a lot of screen time as well. 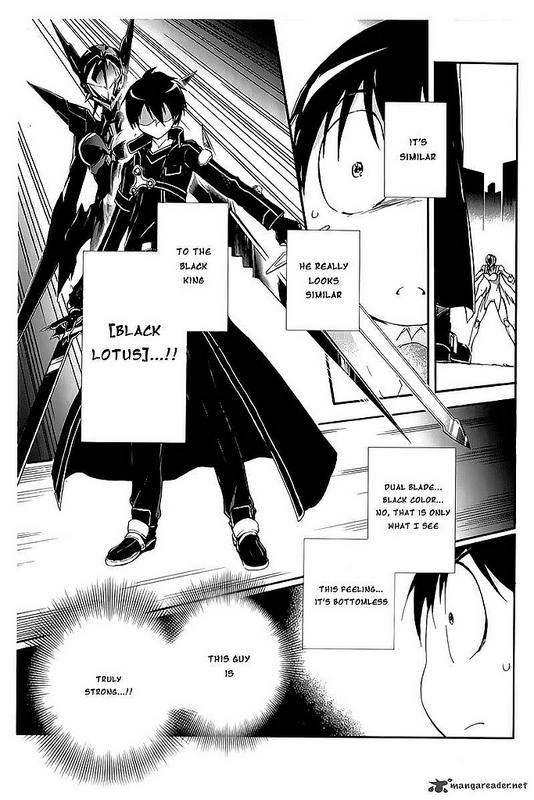 Back to the characters. Kuroyukihime is a solid character and I’d say that she is still the best character in the series. She also happens to be one of the very strongest as she is at Level 9 and just needs one more level up to clear the game. Pretty impressive if you ask me. Her Black Lotus avatar is definitely a really cool one and at the moment she has yet to lose a serious fight although we’ve seen a few opponents who could give her a run for her money. She definitely helps the series out quite a bit.

Scarlet Rain also has a decently large role in the series. She’s a good fighter but when pretending to be Haru’s sister you have to wonder if she could have come up with a better plan. That one is extremely risky and if it was any other character who was a bit smarter it simply would have worked. The strategy probably would have worked just as well if she just cornered him after school and forced him into a battle. She was really just testing his combat abilities after all.

The Chrome Disaster armor/entity is as cool as ever. You definitely have to appreciate the design and since he works like a symbiotic it leaves a lot of potential for future arcs. I’d like to see him use the power more and try to master it since it would be really handy against the stronger villains in the series. It lets you use Override techniques a lot easier and can even heal so it doesn’t get much better than that.

The series does have a few hiccups as it falls into the trap of fan service. It’s not too excessive but present enough to be noted. What the series prefers to focus on is throwing Haruyuki in awkward positions that may not exactly be fan service moments but with his terrible reactions and everyone constantly flirting with him, it can be just as forced and unnecessary. Considering that Haruyuki seems to want to be with Kuroyukihime, you’d think that he could control his thoughts better with the others, but he just isn’t quite that good.

As the manga ends early you can’t help but think that we never really got to get to the “good” part. Not necessarily stuff from the novels but imagining that this manga wasn’t based on anything you would have to assume that these early volumes were building up to the 5 Kings actually appearing and Haruyuki eventually getting to fight them. A high level battle of that caliber would definitely be a blast to watch. There’s just so much left to do when the series ends but at least it’s not as if the title is only 3-4 volumes. 8’s not a bad number to end on and the series certainly still got to do a lot. I’m sure to an extent it’s not like the author had much of a choice on where to end it. 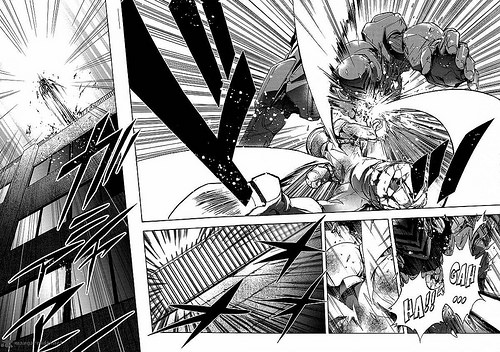 Overall, Accel World is a good action manga. The fights are good and the art also holds up well. It suffers from some fan service issues and an iffy main character which holds it back from being a considerably better title. It’s not a very long series so you’ll be through it pretty quick but it’ll be a fun read nonetheless. The ending may not feel too epic or climactic but that’s basically because the series had to come to an abrupt end. The author still did a good job of picking a decent place to end for those who don’t like cliffhangers. I would have liked it to end in the middle of a fight with the tag line “Read the book to find out what happens” myself but it is what it is. So I’d lightly recommend the title. I’d certainly be interested in seeing what someone who has not read the novels or seen the anime would think about it. It may feel pretty random but it’s still an action title so as long as you get engaged into the story then you’ll be fine. Who knows, maybe it’ll end up getting another manga series if we ever get another season or the light novels really take off in America.

Medaka Kurokami is a very high tier fighter and she’s one of Shonen Jump’s elites. Kuroyukihime is very skilled as well, but not even she can defeat such an opponent. These two are meeting in battle because they are both from the Student Council and they’re similar in many respects. They both seem to be decently rich and their designs are even a little similar. Medaka Kurokami wins.

This battle may not be anime vs anime, but I had to do it since Soundwave’s design looks so similar to Black Lotus’. Black Lotus is definitely the superior fighter and Soundwave won’t be able to get near her thanks to the massive speed difference. Kuroyukihime also has a good long range ability at her disposal and she could just finish him off in close combat. Kuroyukihime wins.