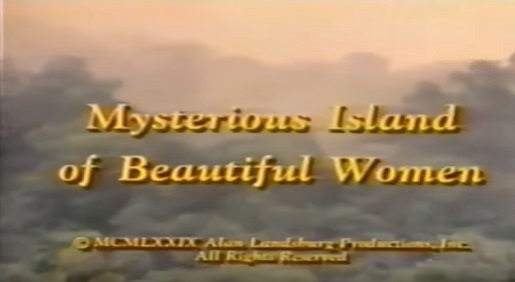 The Mysterious Island of Beautiful Women is one of those films where you have a pretty good idea of the quality of the title before watching it. This definitely isn’t a good film and manages to stay consistently weak in all areas. It doesn’t do much to try and make this a memorable adventure so at the end of the day you are just wondering what the end goal of the film was. We may never know.

The film starts with a bus full of people heading to a plane and realizing that taking to the air may not be such a good idea. This thought is confirmed as we cut to the present where a group of people are flying around the globe to try and cure someone’s eyes or he may die from the pain. Unfortunately they get lost thanks to the pilot not being very smart and they didn’t stock up on fuel either. They land on a mysterious island where the women and the men are out to destroy them. Can the heroes take their guns out in time or is it all over for them.

Right from the start you’ll see that the title is a little misleading. At the very least, you weren’t expecting a bunch of men to be running around right? Well, you’d be wrong. There’s a tribe of men that have been defeating the women left and right, destroying their shroud of Mystery in the process. The girls can’t actually fight that well as they just seem to panic whenever a guy appears who isn’t trying to surrender. It’s easy to see why they’ve been losing the war and so I have to blame this on their commander Lisbeth. (Spelled more like Lisabeth, but they never pronounce the a so I may as well not write it in..) She got drunk with power and is more concerned about destroying her own people than coming up with some good plans. Not a great leader to have on your side if you ask me.

The main characters aren’t much better though. The pilot is a drunk who has seen better days. He drinks up the whole supply so nobody else can use it as a pain reliever and then decides to take a nap in enemy territory. Safe to say that this was his final mistake. He just never became a good character. The body guard was reasonable I suppose since at least he could fight and is crucial in the getaway plan. He isn’t the most interesting of characters but he is good enough.

The guy with the injured eyes doesn’t get to do much more than yell from all of the pain. It certainly isn’t his most impressive showing either. The most interesting character is the really over expressive one. He is constantly yelling hypothetical questions in condescending tones throughout the film. He can never just say something, it is always a yell. I feel like his whole personality with that is rather unintentional but maybe he is supposed to be like that. At the very least, he was certainly trying hard to escape or make a deal. The constant panicking gives the film some form of tension even if it’s not enough to save the atmosphere.

Unfortunately we do get some painful romance with the main characters. It’s certainly sketchy since they point out multiple times that the women on this island stopped growing mentally a long time ago. It seems iffy to start a romance under those circumstances as their only other experience with it up to this point has not been pleasant. The romance never really feels balanced and the film definitely should have avoided this land mine. The film also delves into gritty territory with the whole plot of having the men involved. We really didn’t need the movie to go there and the film should have just been about the women as the hunters, not the hunted. Any mystique of toughness they may have had is eliminated once we learn that the men are on top of the food chain once again. Destroys the whole premise of the film as well.

Finally the film also throws in the animal violence for good measure. This movie definitely was not very subtle right? It basically tries squeezing in every possible negative it could. The shooting definitely comes out of nowhere. Then there is also the painful writing to think about. The dialogue is just terrible. None of the characters are particularly likable as a result. Why did Lisbeth teach everyone such broken English when she was old enough to speak well? Was it another power move? Her English also deteriorated but I suppose it was part of the act. The Nun also didn’t handle the situation well since she never suspected a thing. It’s a little sketchy how everyone would trust Lisbeth so completely as to not even check of the Nun was still around.

There are no redeemable qualities in this film aside from the fact that is is rather short. At least you won’t be watching it for very long. The sad part is that there’s an easy fix, just eliminate the tribe of men from another island. Have the main plot be the main characters being hunted by the Amazon warriors. It would be a much better film and while it may still get gritty, the premise is a whole lot better. It’s not like you’d want to root for the main characters anyway so you wouldn’t mind them getting bumped off.

Overall, this film is definitely a mess. It has so many issues that you’ll wonder how this film was ever created. Clearly the writers didn’t even care for the premise which is why it plays out nothing like what the title suggests. The only thing to do for a film like this one is to simply forget about it. Out of sight and out of mind right? If you want to watch a good film about a mysterious island, check out Scooby Doo, Zombie Island.