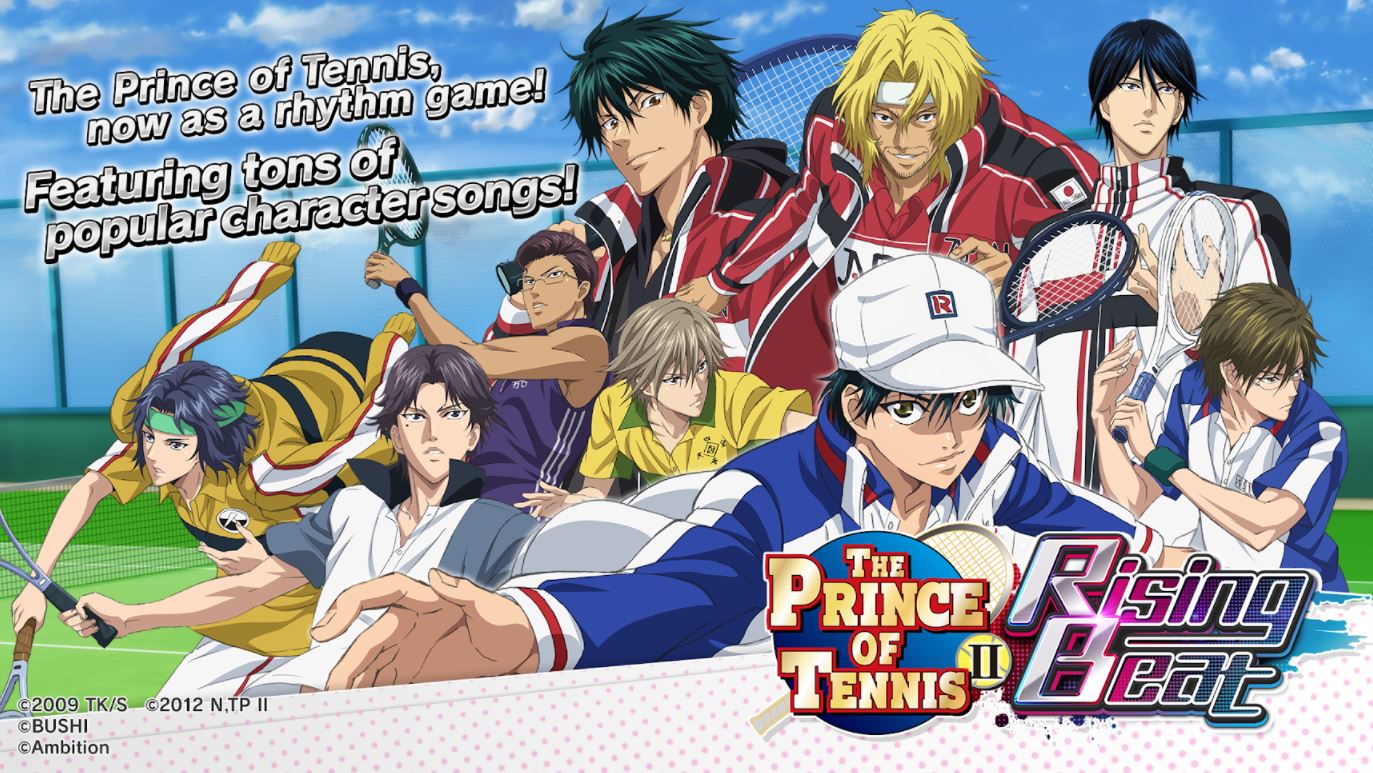 This was definitely a pretty random app game that’s for sure. Who’d have thought that Prince of Tennis would be coming out with a rhythm game right? This is really the first one I’ve played. I can see the appeal but I think there’s room to improve on the execution. Ultimately this isn’t a game that I stuck with for very long as you’ll see based on the various brief stats page I’ll be uploading. It just doesn’t feel as interactive as I’d like although the songs are cool.

The plot seems to basically be handling the early parts of the New Prince of Tennis series. It’s been so long since I read those parts that this really feels brand new at this point. That also means no Ryoma at least in the levels that I played so you’ll miss him a bit. The game is still relatively early on so there aren’t a lot of story levels yet but I imagine that will change as the game continues to update.

Aside from the story mode there are a lot of other things to do like playing through normal battles or customizing your characters. In fact you have to play through some of these normal levels in order to progress through the story or you’ll get stuck very quickly. After two story levels is when you have to play your first side mission. I’d rather the game let you just play through the story without having to go on a side tangent. I suppose the gameplay is all the same so it shouldn’t make a big difference but I want to just see what happens next in the story.

The graphics are pretty good. The art style is colorful and I like the gameplay effects. On the other hand, it’s all fairly repetitive. Every stage looks very similar and the characters are chibi style which can be fun in short doses but I don’t think it works for the whole game. It’s fun and looks nice though which is the important part. The soundtrack is definitely impressive with all of the lyrical songs. That makes sense of course since you can’t have a musical game without the songs to accompany it right?

As for the gameplay itself, the goal of the game is to tap precision. It’s effectively like Dance Dance Revolution except instead of dancing to the beat you are tapping to it. If you click the circle when it’s in the right spot then you can either hit the ball or even return it. It’s not very hard to get the hang of it either. At times you will hold onto the icon in order to complete the action and other times you will just need to tap it really quickly.

A lot of mobile games have a heavy emphasis on tapping so this isn’t anything new but at the same time it just doesn’t feel very interactive. Maybe it’s because the animations are set and your actions don’t change it. Usually at least the animations change like in a fighting game or something. Here you will be seeing the exact same animation back and forth as the two characters hit the tennis ball around no matter what you do. There’s not really any variety either.

I think that’s really what hurt the game for me. It’s just not all that interesting after a while and I wouldn’t say the story is enough of a legend to hold the whole game up. For that you could probably just read the manga or watch some of the shows and movies. I wouldn’t call this a bad game but it doesn’t really have enough strong points for me to call it a really good one either. As a result it ends up lagging behind the other apps.

There’s not a whole lot more to say about this one. In terms of replay value there is certainly a lot as long as you enjoy the game. Customization alone is already quite extensive and then you have the level up system and wide array of characters to work with too. The game will likely continue updating as long as it gets support so you shouldn’t have to worry about content drying up anytime soon either. Just keep on chugging along and you shouldn’t have any issues. The game is free too so it’s not like you’re spending any money here.

Overall, I’m glad Prince of Tennis got a game even if this one didn’t really hit it off for me. I’m still surprised it came out since the title doesn’t seem too huge anymore, particularly the sequel. It was hard to find on the app store initially due to the way it appears in the search results too. Hopefully it does well enough for them to consider another game in the series but with a different gameplay style. A tennis focused game would absolutely have a lot of potential if you ask me. You can definitely achieve that with mobile. Now for mobile I’m really just waiting on Megaman X Dive to show up. That’s a title I’ve been looking forward to for a very long time.