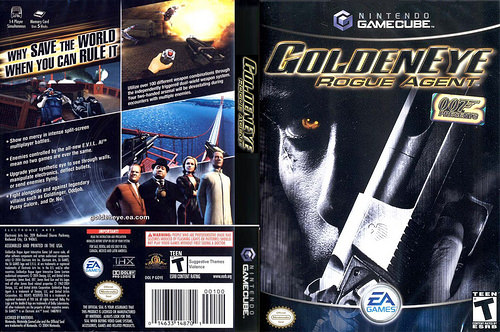 It’s time for a very interesting game review. The reason why I say that is because this review isn’t 100% complete. This game came in two discs and the only problem is that I don’t have the two discs. I only bought the first and I’m not about to go and try to buy the other one so I’m reviewing the game based on the first half. That’s reasonable though since the first disc has over half of the levels since the second one focuses on the multiplayer aspect of the title. It’s a fun game and feels rather polished. It may not be my favorite Bond game as that honor belongs to one that I’ll be reviewing shortly, but it is definitely a solid game in its own right.

The game manages to bring together most of the biggest villains from the classic Bond films. They have all united to try and take the agent down for good which is certainly bad news for this operative. Fortunately he has the help of Agent Terry, a fighter so powerful that even 007 has to acknowledge his abilities. Together these two agents will do their best to fight against the forces of evil. Can they succeed or will they fail? It all comes down to the skills of you, the player.

The gameplay is pretty straight forward. You try to shoot the enemies ahead of you and ultimately you have to survive at any cost. Your mission will typically be to activate something after you’ve cleared out the guards. You have your hand weapon when starting a level but you can also pick up weapons that are scattered across the room from the various minions. You can also engage in fisticuffs when you are out of ammo, but I can’t really say that I would advise this. Just try to have some ammo on hands so don’t waste your shots. The gameplay is quite technical all things considered and you’ll want to try and remember as much of it as possible.

Also, it should be noted that this game is quite difficult. I’m not great at the FPS genre so that should be taken into account, but the levels are very unforgiving. Shots from the enemy take up a lot of damage so even with your health being able to regenerate it is hard to proceed through a level. The enemies also bring the fight to you so you can only hide for so long. It’s definitely not a game for newcomers to the genre or kids in general as they won’t stand a chance. It helps the game last longer for sure though so that’ll help it be worth the price you paid. The main game length should take you around 10 hours which is solid. There’s not really anything else in the way of replay value single player wise. There is a nice multiplayer option though so that’ll give you enough fun for a very long while. Be sure that you have the 2nd disc or you won’t be able to play it though.

I’d say that the graphics look pretty good. They’re not super amazing or anything like that, but they get the job done. The levels look good and the game does give us a solid amount of cinematics which is refreshing. You can tell that some real effort was put behind this game and that’s definitely a good thing. It’s also impressive that Bond got at least 3 different games for the Gamecube. Not just any character can pull that off. It’s a little hard to compare FPS titles to each other since they’re so similar so I couldn’t tell you if this game is as good as Agent Under Fire or not. I’m inclined to say that it isn’t but it’s probably pretty close.

The plot was reasonably engaging. It didn’t have as many one liners as the last Bond game, but that’s because Bond isn’t the lead so it makes sense that Terry is a lot more withdrawn. After all, he’s here to help save the day, not to trade barbs. It’s hard to say how likable the main character is either of course since he’s rather silent and doesn’t do anything but fire at the enemies. Not a bad thing, but I like when the games aren’t afraid to give the original character a little more personality than that.

Overall, GoldenEye is a fun Bond game. It’s a shame that I won’t be able to see the ending, but rebuying the disc just doesn’t seem worth it and I’m not interested enough to look it up on Youtube either. It’s just going to have to live with the knowledge of only being worth half a playthrough. Honestly that’s not such a sad fate though right? Half a game is still better than none and at the end of the day at least you could say that the game was interesting enough to get through that. If you like FPS titles then this is a good game for you but otherwise skip it. Your enjoyment depends entirely on how you like the genre because it doesn’t try for much more than that. That’s just the kind of genre an FPS is.