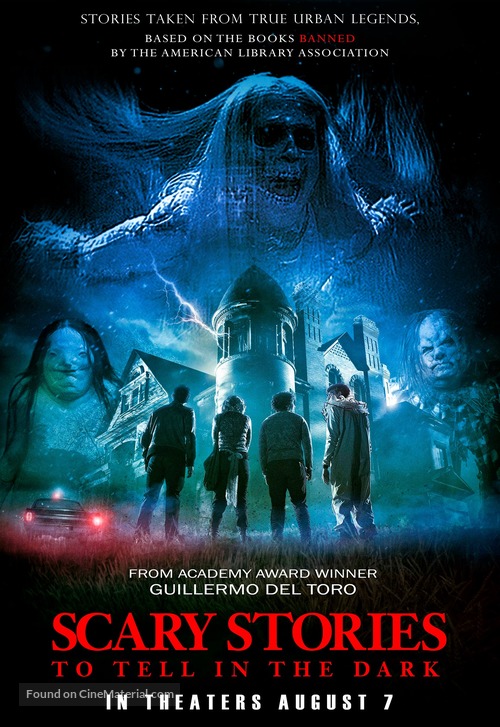 It’s time to look at a fairly recent horror film. You’ll probably remember hearing the name from a while back even if the film was pretty quiet once it came out. I remember thinking the trailer didn’t look so good and the film follows suit. It does its best to be pretty edgy and give you some stories that are both dark and gross, but the end result is a mess that I can’t recommend. It’s not the worst horror film that I’ve seen, but it’s about average for the genre. Average for a horror film is not very good overall.

The film starts with a group of teens deciding to get revenge on the school bully. For years he has tormented them quite a lot and so this Halloween they are going to load their treat bucket with things other than treats. When Tommy steals it they realize that they didn’t have much of a plan beyond that. They meet up with a guy named Ramon and then the whole crew gets locked by the bully inside a haunted house. There Stella finds a mysterious book that was written by the girl who used to live here before everyone got murdered. Now the book is writing a new story every night and the person whose name is on the page dies a gruesome death. Can Stella break the curse or are all of her friends about to be destroyed?

It’s a pretty standard horror plot. When you awaken an evil being from the past she always tries to murder everyone. The nice ghosts never come out to play, but I suppose it’s because they are always willing to move on. The main characters definitely aren’t the most sympathetic figures around though. Their whole intro is about getting revenge on Tommy and two wrongs never make a right. Additionally the film does its best to make each character as unlikable as possible. Auggie is always insulting his sister and Chuck can’t help but stare at her through the window. Stella is ultra goth and loves talking about all these gruesome murders that used to occur. Naturally the group would awaken a monster by breaking into a house and reading a book they shouldn’t have. The whole thing started because they broke the law and busted in the house after all.

The characters never really improve. Chuck is pretty bad from start to finish. He panics quite a lot and quickly makes all of the wrong moves possible. Ditching the other main characters to run on his own is one of the worst things you can do when someone is bumping people off one at a time. If you’re with someone else then usually you’re at least a little safer. I’d make the case that his death did break the rule of each character being murdered at night though, but why should villains follow the rules right? His murder is probably the most interesting one though and easily had the best visuals. The monster who got him looked like a legitimate video game character and was also one of the toughest dilemmas to get out of. Since this villain controlled space and time there isn’t much you can do. Certainly one of the scariest hugs I’ve seen in a while.

Then we have Auggie who is also pretty bad. He’s shown to be way too desperate the whole time and only slightly more mature than Chuck. His death was pretty awful in part because Auggie was given every opportunity to escape. It’s one of those scenes that exposes the film’s writing and nothing in the scene makes sense. Auggie knows that the story is about eating a toe and the heroes keep telling him not to eat the stew, but he does anyway. He doesn’t even look before taking a bite. The scene was terrible in every way possible and it’s just hard to have more sympathy for him at this point because it’s like he wanted the monster to show up. How do you still eat the stew even when everyone told you not to do so at least a dozen times? He hides under the bed and closes his eyes so afterwards he doesn’t know where the villain is. Great…

Stella at least has an origin story to explain why she is so into murder. Something happened with her Mom a while back which messed her up and with these murders being activated by her she is not taking things so well. Still, she’s just not much of a fun character and is hanging out with a pretty bad crowd. Getting knocked into the parallel dimension didn’t do wonders for her. By virtue of being the main character she does get a lot to do and is better than her two sidekicks but never really made it into the next tier of being a solid lead.

The best character in the film is easily Ramon. He’s actually a quality character who is trying to get out of the town without getting into trouble. He’s in the wrong town for that though and you feel bad for him when the characters jump into his car and get him into trouble. Ramon can take care of himself pretty well but there’s not much you can do against super powered monsters. He still lasts for quite a while on his own though. His backstory is also pretty sympathetic since it’s hard to do something when there’s a good chance you’ll be murdered. At least his decisions actually made a lot of sense from start to finish.

While this movie isn’t an anthology you could say that the murders follow that style. Each murder is pretty different as everyone faces a different kind of threat. The hug one was pretty cool and the Scarecrow was also intense. The guy probably could have handled the situation a little better but it was another reality warping kind of threat so ultimately it would all be futile. You still shouldn’t trip so often though. The guy was drunk which didn’t help matters for him. The monster under the bed was pretty hype as well.

The spiders was definitely the worst one though. That one’s more gross than scary with spiders that defy logic. I’d argue that it was probably the most vicious way to go with the hug being the easiest since it didn’t look particularly painful or anything. The film did seem to like its more gross plots though like the toe and the bag or stuff that the heroes used early on. The scenes are brief but don’t really help its case. The film couldn’t resist and gets quite dark by the end with the backstory of the villain who is murdering everyone. We get a pretty long torture scene which is always a quick way to lose a lot of points. I feel like almost every horror film has a backstory for how the villain became all powerful and it’s always completely unnecessary. Keeping that out of things would have been good. The film should have focused on the old lady and the dog more although of course that’s always risky. The film actually did good in not letting the dog get destroyed in this film. I was pretty worried about that for a while there.

The film tries to have an emotional subplot with Stella’s Dad. He doesn’t get to appear much but he seems like a good guy. He gives her a lot of good advice throughout the film like not going outside after dark but she never listens. It’s a pretty tough situation for him too. He’s not handling it perfectly but he’s trying. It’s a plot that largely gets pushed to the side though as the movie has no real time for it. In theory a sequel would explore this more based on the ending although that doesn’t seem like it’s likely to happen. I also think a sequel wouldn’t be needed if Stella had just written a few more lines. I can’t say much more than that for spoiler reasons but if you watch the film you’ll see what I mean.

Overall, Scary Stories to Tell in the Dark is basically your average horror film. I’d say that it has above average graphics as some of the monsters were pretty good. It’s still held back by the usual elements though like some overly dark details and terrible writing. The characters really could have played things out a lot better than they did to the point where it was almost like a parody at times. It’s all played deadly serious though so hopefully the writers were self-aware but it’s really hard to say. If you like horror films then you’ll probably enjoy this one, otherwise I’d recommend going back and watching some Scooby Doo features instead.