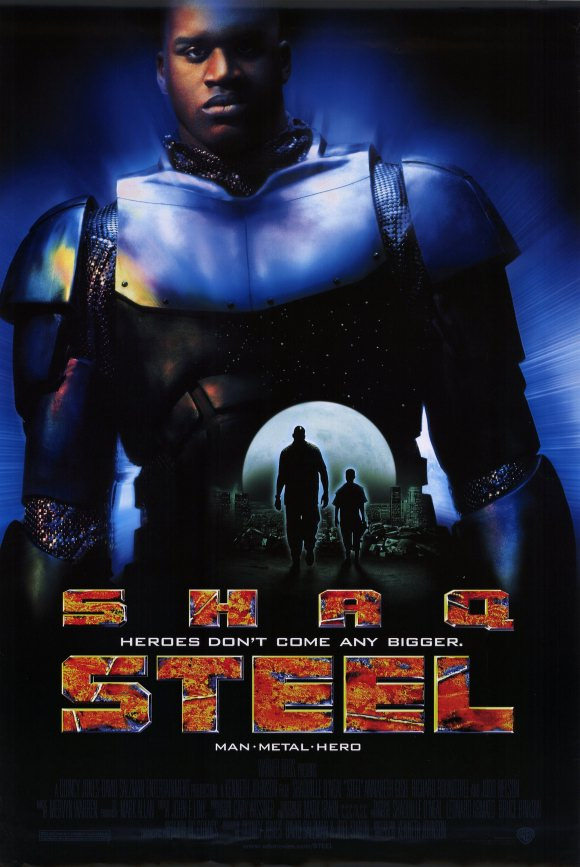 It’s time for an old superhero film. This one wasn’t exactly critically acclaimed when it first came out, but it’s aged pretty well. It’s a light hearted film that’s pretty fun and never take itself too seriously. This makes some of the fatalities throughout the film fairly unexpected when they happen. It would have been better if they could have actually tied this into Superman instead of treating the latter as if it was fictional, but I’ll take what I can get for now.

The plot follows a man named John who works with the government on testing weapons. Unfortunately, one of their men, Burke, wanted to show off for a senator so that he could get a promotion. He activates the weapon past its safety limitations and destroys the senator by mistake. He is expelled from the army (No real charges aside from a court hearing) and Steel decides to step away from the army. He’s done with the job now. His friend Sparky was injured so now it’s just too personal. She is fated to live in a wheelchair now and is having a hard time adjusting.

Steel isn’t able to lead a normal life as teenagers somehow got the experimental weapons from the army and are robbing banks with it. Steel realizes that he’ll need new weapons to fight these guys with weapons so he teams up with Uncle Joe and brings in Sparky so that the three of them can build a bunch of gadgets. They build him a steel suit, a hammer, magnets, and even a grapple hook. Steel is ready to bring on the hurt, but can he really hope to stop these villains?

Right away you can tell that Steel is going to be pretty fun. The opening action scene with John chasing one of the teenagers who fired at the cops was pretty fun. They weave their way in and out of the subway system and John has to use his super strength to keep up. He lifts a gate off its hinges and this is all before he even gets the steel suit. It was also fun because it shows what a heroic guy John is.

Is John a little on the cheesy side? Sure. The whole film is rather cheesy and campy and feels a little older than it actually is. I’m fine with that though as I’ve always been a fan of both those genres. John himself acts like the perfect hero as he looks out for his community and always does the right thing. Everyone can count on him and he has a really good reputation. He has no dark secrets or hidden memories, he’s just a nice guy. The fact that Shaq isn’t much of an actor only helps this case as he’s constantly grinning and acting like a nice guy that you might meet outside. He doesn’t use as many puns as I was hoping for, but he gets the job done.

Sparky is the main heroine and she’s a fun character. I was worried that she would be lost in doubt for a while as getting crippled really got to her, but she got past this. It was cool to see her gun infused wheelchair and every hero needs good tech support. I imagine we would have seen more of her fighting crime in the sequel if the franchise had ever gotten that far. Uncle Joe is the other supporting character who helped Steel out. He has connections and can get any piece of tech that he asks for. The guy may push Steel rather hard, but he’s another likable old chap. There’s not a whole lot to him, but sometimes there doesn’t need to be.

Finally we have the main villain, Burke. His name doesn’t exactly strike fear into your heart now does it? I couldn’t really take him seriously, but I do admire the fact that he doesn’t waste time. After murdering one of his subordinates, he is subtly threatened by the secretary. At this point, I thought Burke wouldn’t live through the film and she would get the last laugh as a stinger to the next film. Instead, he takes her out of the equation 2 minutes later with an elevator stunt. I came to the realization of what was happening at the same time that she did and it was rather unexpected. As I mentioned earlier, some of the deaths I didn’t really see coming because of the happy tone that the rest of the film had.

Still, that’s not enough to make Burke a good villain. None of the others were any better though so he’s the best by default. The guy he tricked into letting him be the big boss was probably the most gullible gangster boss I’ve seen in a while. Did he really not see Burke’s betrayal coming? I have to give one of the minions some props though because he looked exactly like the Donald Trump impersonator from SNL. It was uncanny and a bit distracting, but pretty novel.

Surprisingly the best fight scene here was the one with the trains. It was more of a chase than a fight, but it was still pretty fun. Once Steel was in the suit, we actually didn’t get many action scenes. He’d usually just use the magnet and then everyone would run away. He didn’t fare well against the tank, but fighting a vehicle isn’t much of a fight either. It would have been cool if Burke had made his own suit, but I suppose you’d wonder how he made it or why he’d bother.

One of the things that really helped the film stand out was its intense soundtrack. The themes were all really cool and particularly Steel’s theme. It would play for quite a few scenes when Steel would show up and it helped get that freestyle vibe to the film. A good soundtrack can absolutely go a long way and I was pleasantly surprised to see that Steel had one.

Overall, Steel has aged well and it’s a fun film that you can watch while eating a bowl of popcorn. It may not have the effects and explosions of a modern action film, but it has all the heart and wit that you could ask for. It’s a simple film at heart and it’s not too ambitious. It just adapts a straight forward plot and keeps it moving. I’d recommend checking it out and I have a feeling that you’ll enjoy it a lot more than you would have expected. I definitely wouldn’t mind a Steel reboot at some point although it would be hard to top this one. Throw in the cape and give us some good action scenes and it’s anyone’s game though.