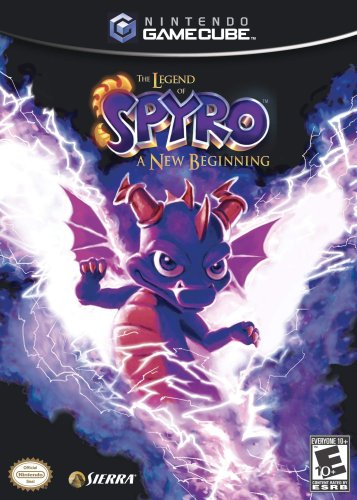 This game started Spyro off on a whole new adventure. I’ve certainly had this on the list for a very long time and now I can say that I’ve finally checked it out. It doesn’t really stack up to most of the other Spyro games though. While I do enjoy the combat aspect of it, the game ended up being really repetitive most of the time so even the story doesn’t totally make up for that. Still a good game in its own right, but I’m not ready to put this at the top.

The game starts off with Spyro being raised at the dragonfly village. He is the legendary dragon foretold by the prophecies but he doesn’t know that and so he just hangs out with Sparx and has a good ole time. The two of them are goofing off when the area is attacked and we find out that the entire world is in danger. There’s no time for the dragon elders to explain everything to Spyro just yet but he needs to awaken all of the elders so that together they can stop Cynder from waking up the ultimate evil. Is Spyro really ready for such a tremendous responsibility?

Right away there is one thing I do like a lot about this game and that’s the banter with Spyro and Sparx. Sparx is a character right out of an old, cheesy kind of film where every line has to be a joke about something. It’s a huge change from how he acts in the old games and it’s an improvement. This time Sparx is actually rather memorable. In general the game’s dialogue is a lot more fun than usual and that’s good since this game was all about having a deeper story than the rest. The big voices they got for the game were used well and it enhances the story. I would say this has the best story for a Spyro game.

That said, there is something which keeps this from matching up to the other Spyro games and that’s the gameplay. Initially I was pretty happy to see that this was going for more of an action approach. Gone are the collectathon days. At the same time, this means that the levels feel a lot more constricting as there isn’t free roam around the place now. Additionally, the gameplay is very limited. It’s more repetitive than you’d expect as you use the same two moves over and over. You either smack opponents in close range or you use your breath to attack them. You can level up by beating enemies but I would always skip the ones I wasn’t forced to fight because of how many there are.

At one point I thought I was stuck or not supposed to be fighting the enemies because I beat dozens and new ones kept spawning. I had to check online and it wasn’t a glitch I just had to keep fighting. After a long time they all went down. It just seemed to pad out the time for no real reason. That said, you’ll still have enough energy to max out at least two of your elements by the time the game is through. I would recommend maxing out electricity first because then you can cheese almost the whole game. See, the electricity allows you to throw enemies like telekinesis and almost every level has a ledge where you can fall off. Just park yourself by it and throw every enemy over. They instantly lose all health and that speeds up a lot of these never ending fights.

Additionally, even a small fall will destroy most enemies so if you see some stairs or small drops you can use them as well. Just keep on throwing the enemies and you’re good. As for the bosses, each time you take out a third of their health it’s considered a check point so if you lose one of your unlimited lives then they don’t recover that health again. So just make sure you land some hits and you’re good. Most of the bosses will end up being easy as a result. The only really tough one was this fire train you have to fight. It moves so quickly and there are so many constant explosions that it can be tough to even see what is on the screen half the time. It just all blends together as explosive smoke which makes it difficult to aim. That boss took me several tries to defeat before I was able to get a win out.

It would have been even more difficult without having the fire attacks maxed out so focus on fire and thunder in the game. You’ll never need the other elements that you get. A little more variety in the gameplay would have just been nice or more depth to the combat system. With a good combat system you can have me fighting enemies for hours and I’d be good. Of course while this doesn’t match up to the other Spyro games I would still call it a pretty good one. I had a good amount of fun and the game isn’t all that long anyway so you’ll be done in a flash.

In terms of replay value it doesn’t seem like there’s much. I suppose you can try to get more exp but there’s no post game or anything. This is really the kind of game where you are playing for the story experience and you probably won’t pick it up again. The soundtrack isn’t very memorable but I thought the graphics were really good. I liked the artstyle here as it really pops out at you from the start. The colors are sharp and this has aged super well in that respect.

Overall, I’m looking forward to the sequel. Even if the gameplay wasn’t perfect, the story was a lot of fun. I’m hoping they can keep the good writing and solid enemy threats at the ready. It’s a shame that Cynder won’t be as powerful in the next installment but I’m hoping she will still get some action here. I don’t know how long it’ll be until I get the sequel but it’s definitely a title that’s on my list so I will get to it. The Spyro legacy cannot be left uncompleted. If you have not played this game yet then I would definitely recommend it!